You are here: Home / beef / Back In The Saddle: Daring Bakers’ Lasagne 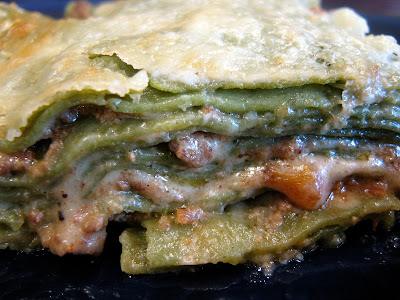 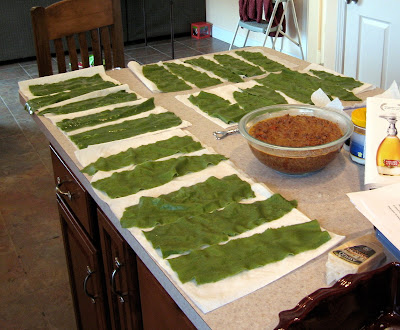 And people wonder why I think counter space is a necessity for the Daring Bakers! This is the cooked noodles lying out to dry and waiting to be assembled–while I was still cooking more noodles.

You read that title right–although depending on how well you know me it could either be the Daring Baker part or the lasagne part startling you. I chose this month to re-join because I figured my life should be settling down soon (ha!). Little did I know that the challenge would be one of those ubiquitous dishes I get served in other people’s homes all the time–and that I don’t really love myself. 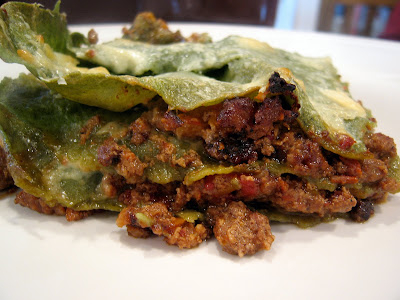 So I bet if you know me well you never thought I would be making lasagne completely from scratch, long simmering ragu, bechamel, and homemade spinach pasta included.

Suffice to say neither did I. 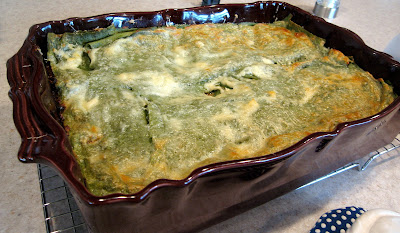 But I like that I did, because, as with all Daring Baker challenges, the sense of accomplishment at the end was pretty worthwhile.

As to the dish itself? I liked it but wish it had more ragu, which is usually my favorite part of lasagne. I did like that it had so many thin layers of noodles. John, who was the real test (he loves lasagne) loved it. I asked him more or less than others and he said it was so different from his other favorite lasagnes that he refused to say he liked it more but he did like it as much. He declared it was indeed worth MY effort. 😉 I said no thank you to a repeat so you better treasure it now, Mister. 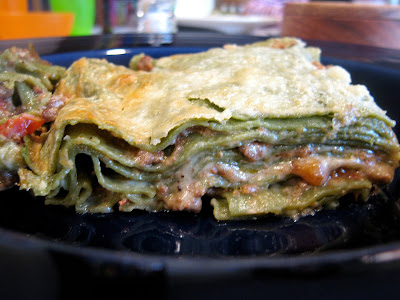 The recipe is looong, so rather than type it all up, you can find it through one of these links to our hosts’ blogs. The March 2009 challenge is hosted by Mary of Beans and Caviar, Melinda of Melbourne Larder and Enza of Io Da Grande. They have chosen Lasagne of Emilia-Romagna from The Splendid Table by Lynne Rossetto Kasper as the challenge.

It was a 2 day affai 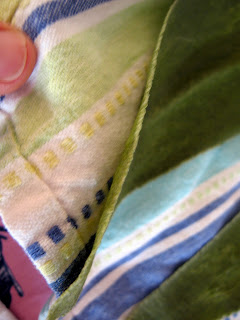 r. The first day I made the pasta and the ragu. The pasta was a hand-kneaded 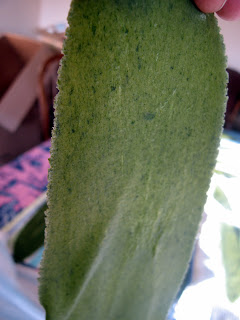 spinach and egg dough. A common complaint seemed to be that it was dry and mine was no different–and I wondered if I had squeezed my frozen spinach too dry. It was so hard that after adding some extra egg white, I put it in the mixer and kneaded it with the machine, spritzing it with water. When it looked to me like it would go through the roller (yes thank heavens we were allowed to use a roller), I hand kneaded it for a bit to get the feel. I rolled it through to the thinnest setting–in front of light you could see the shadow of my hand through the sheet, but I don’t have a good picture of that. Rather than hang dry it, I dried it on towels, a la my grandma.

For the ragu I only followed the recipe loosely, which was permitted. I used ground pork and beef from my freezer, I upped the onions and replaced the celery with bell pepper and of course added garlic as well. After that I followed the recipe basically, only increasing everything a bit since I had more meat than they called for.

The next day I made the bechamel, to which I added a handful of Asiago cheese, because I don’t really like white sauce. It was just enough to give it a salty tang. I used Asiago all through this recipe instead of Parm because that is what I keep on hand. Astoundingly I was able to make the entire lasagne out of my pantry! 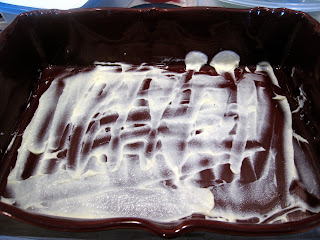 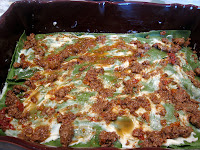 and not having enough bechamel. I used my super gigantic deep dish casserole pan (thanks Mom in law!) and was able to use all of the lasagne noodles. I used about 2 tablespoons of bechamel every time it was called for, and had perfectly enough for the entire dish, although spreading it was a bit of a pain. 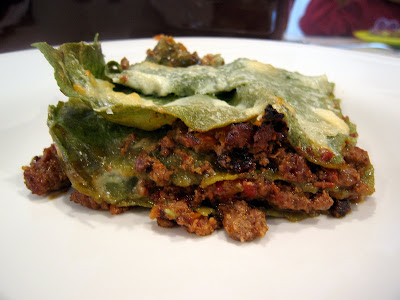 My entire family loved this, so I guess it is a shame I don’t like lasagne much. Actually the real shame is that my family–as in my siblings and parents–could not be here for it because they love traditional Italian food. Sorry guys!

Hey just a friendly reminder to send in your entries for my Grandma’s Recipes event. You have until April 11!