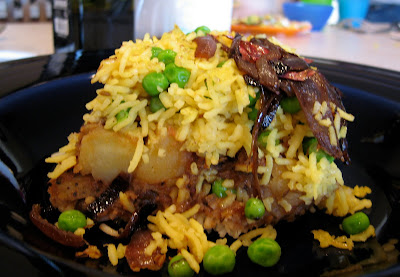 I LOVE my Taste & Create partner this month. No disrespect to my former partners–many of whose blogs I still read regularly–but Simran and I are on a wavelength of sorts (as far as I am concerned anyway, haha, who knows what she thought of my blog). I instantly found many, many dishes on her Bombay Foodie that I wanted to not just eat but also make. Settling on just one was difficult and chances are I will make some of those I passed over in the upcoming months.

But in the meantime I did need to choose just one. 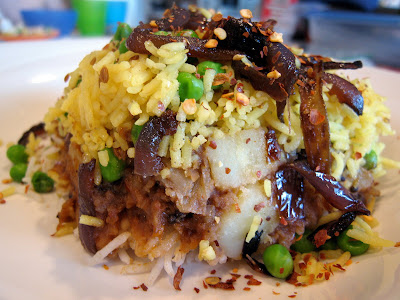 A little over a year ago I promised myself that 1 out of every 3 of our meals would be vegetarian with a second third being either vegetarian or poultry. In other words, I have been trying to cut down on my beloved pork and especially beef. More for environmental reasons than health reasons. Anyway we were due for a vegetarian meal and so I decided to choose from the one dish meals she had posted.

Simran did not really name her dish, so I am going to call it Bollywood Biryani. Biryani is one of my husband’s all time favorite Indian dishes and he loves it when I attempt another variation on the theme (for those who don’t know, as far as I can tell almost any layered rice casserole qualifies as biryani when made with Indian flavors and spices). I have to laugh calling mine Bollywood Biryani–you see Simran said that she had trouble coming up with the dish, which was submitted to a Bollywood cooking event, because her Indian cooking is more girl next door and less red carpet. Well I am afraid I took her dish, so lovely and perfectly unmolded into a tower of layers, and served it as a casserole. You see I too am all girl next door when it comes to cooking, and I just did not have the energy to try to unmold it. Plus, like a dunce, I chose a baking dish that was too big to unmold on any of my serving dishes. So if you want to see the real, gorgeous deal, check out her version. 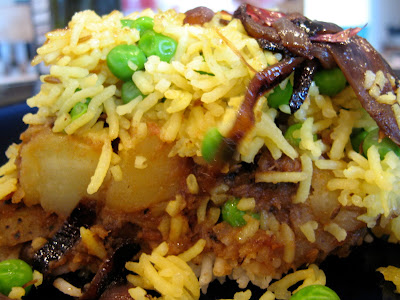 Now the question is what did I do differently? I added cumin seeds, 2 cinnamon sticks and peas to the yellow rice. For the paste, Simran makes a point of saying that the it is very flexible–that she has added or subtracted various spices and aromatics herself over the years. So my recipe for the spice paste is below. Otherwise, check out the link above for how it all fits together. 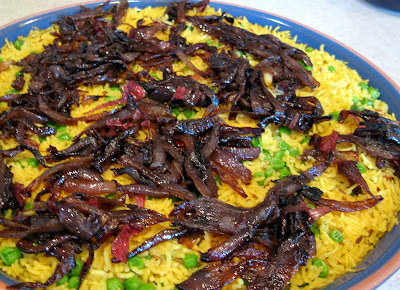 1 T ghee
2 medium-large onions, chopped
5 cloves garlic, chopped
1 1 1/2-inch piece ginger, minced
1 1/2 t dark mustard seeds
1 T cumin seeds
1 T coriander seeds
1/2 t hot pepper flakes (use more if you want it spicier–I could not because of kids)
1 t half sharp paprika (use to supplement the lesser amount of pepper flakes; leave out if you can use a lot of pepper flakes)
1 1/2 t garam masala (high quality one, with cinnamon, cloves and cardamom)
2 T ghee
3/4 15-oz can chopped tomatoes
potatoes and black chickpeas, cooked as described in Simran’s recipe 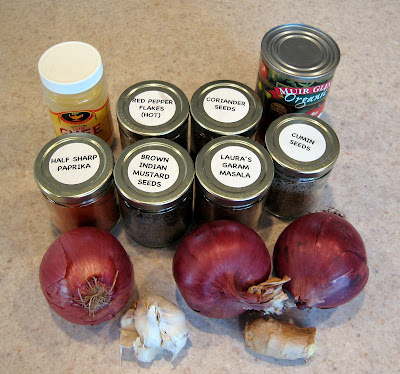 Heat a medium-large skillet over medium-high heat. Add 1 tablespoon ghee and heat it up. Add the dark (brown or black) mustard seeds and fry until they pop. As the popping slows down, add the onion, garlic, ginger, cumin seeds, coriander seeds, red chile pepper flakes and paprika. Stir and fry until aromatic, about 2 minutes. Add the garam masala at the end, before pureeing. 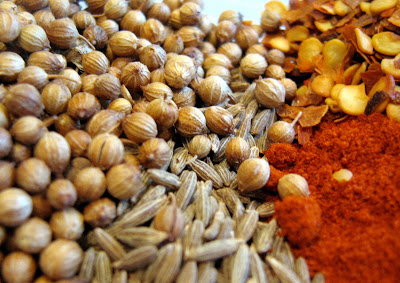 Transfer the onion mixture to a food processor and puree, adding water to achieve a smooth, somewhat wet paste. In the meantime, wipe out the skillet and add the remaining 2 tablespoons of ghee and heat it on medium high. Add the onion puree and fry until the ghee separates and the puree becomes more of a dry paste. Add the tomatoes mix in and fry again until it is a dry paste. Add the chickpeas and potatoes and toss to coat with the paste. Set aside. 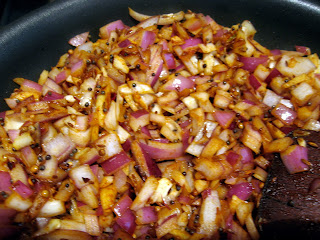