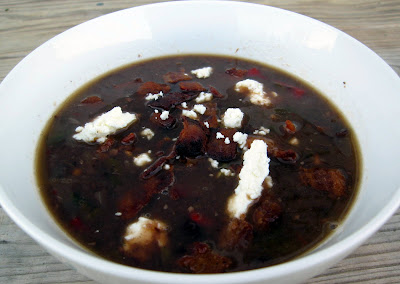 I’ve had a hectic, back and forth to Columbus, lingering virus, blah blah blah week or so, and when I recently got back from Columbus I did not want to think about anything complicated for dinner. As a matter of fact, what I really wanted was beans. 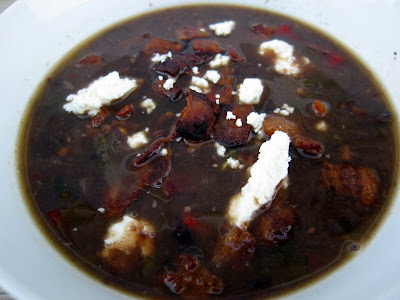 It may surprise you to learn that while I grew up with beans in my chili, I did not grow up with beans much besides that. There are a few bean soups my mom makes, but they are all very Southern, simmered with a ham hock, and for some reason–I wish it were different!–I just cannot stand the taste of simmered ham hocks. So I did not eat much beans growing up. 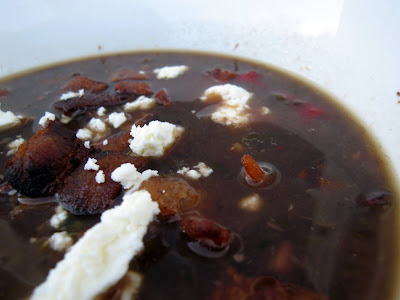 But from the perspective of my health and my pocketbook, beans are probably the best thing about my diet now. Dried and canned both, we go through oodles and oodles of beans, as a complementary ingredient, as a main dish, as a side dish, you name it…. And when I crave bean soup what I mean is I am craving some sort of Latin bean soup: Mexican, Cuban, Southwestern, South American…. Happily I had bookmarked this method of cooking beans (Borrachos, or Drunken Beans) from Rancho Gordo and so I used it as my guide when making this soup.

If you want to make this soup vegetarian, it could easily be adapted using vegetable oil but you might add either some liquid smoke or smoked paprika to replace the smoky bacon flavor. Heat a large pot (at least 4 quarts) over medium heat. When it is hot, add the chopped bacon and fry until the bacon is crisped and the fat is rendered. Remove the crisped bacon with a slotted spoon and set aside on a paper towel. Drain and reserve all but 1-2 tablespoons of the bacon fat. Add the finely chopped onions and cook until browned. Add the garlic and cook another minute. Then add the dried beans, any water they have been soaking in (or enough water to cover–you want the water plus the beer to cover by 2 inches), and a bottle of beer. Bring to a rolling boil, reduce the heat to low, partially cover and simmer until the beans are just getting tender.

In the meantime, heat a skillet over medium high heat. Add 1-2 tablespoons of the bacon fat (freeze the rest for another time) and add the sliced onion when it is hot. Cook, first over medium high heat but gradually lowering the heat until they are brown and caramelizing on low heat. I cooked the onions for almost as long as the beans took to cook, if that tells you anything. Add salt (and sugar if needed) to taste. Set aside for a garnish.

Keep an eye on the beans–add more water or beer as needed. The water level should remain 1-2 inches above the beans. When they are barely tender, add some or all of the roasted chile peppers (I only added some and used the rest as a garnish because my poblanos were too spicy for Alex) and salt to taste (start with 1/2 teaspoon and taste every 3-5 minutes, adding more as needed). When the beans are creamy, the soup is ready. Using an immersion blender, puree the soup for a moment or 2, just until it is thick enough for your taste.

Serve the soup garnished with any leftover roasted poblanos, caramelized onions, feta cheese and crispy bacon pieces. If your daughter complains it is still too spicy (only Alex did), also add sour cream.