Traditional refried beans are easy, delicious and just like you would get in a Mexican restaurant!. Affiliate links were used in this post. A copy of Dos Caminos Mexican Street Food: 120 Authentic Recipes to Make at Home

was sent to me by the publishers for purposes of an honest review.

Finally! You would not believe how hard of a time I have had sitting down and getting this post to you! First, on Wednesday, when I hoped to post it, we lost power for pretty much the entire chunk of my writing hours–i.e., late at night. Then Thursday I was at Costco all day, and when I returned home I discovered Finnegan had found one of my Costco-sized (1.75 lbs) jars of I Love Peanut Butter”s Dark Chocolate Dreams. That stuff is awesome–no dumb dog, he– but it is awesome because of how much chocolate is in it. So off we went to the vet, for induced vomiting, charcoal, the whole nine yards. By the time I got home I was whupped. And then I was gone again all day today. Ack! So, finally, these amazing refried beans… 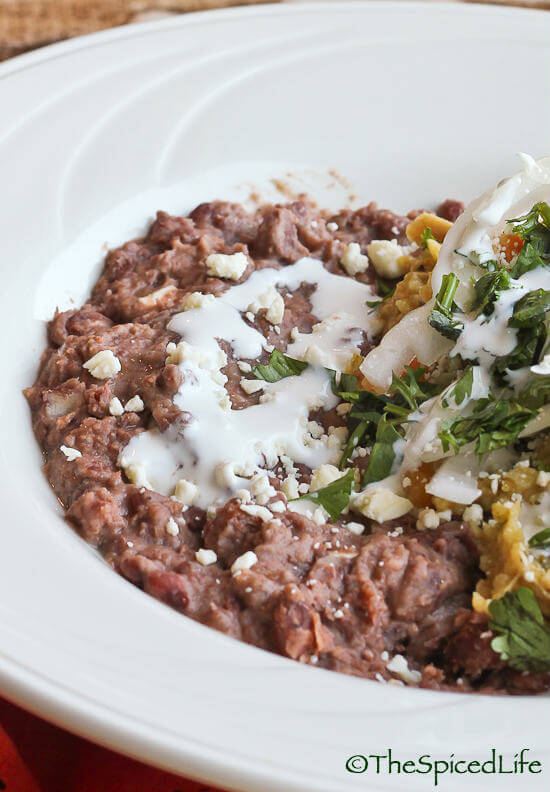 As I mentioned before, I wanted refried beans to serve with the chilaquiles I made the other night. I very purposefully went looking for a recipe that would remind me of the traditional beans we are served in our favorite Mexican restaurants, because I knew that was what Sammy would expect (Alex was not home). I had just received Ivy Stark’s Dos Caminos Mexican Street Food: 120 Authentic Recipes to Make at Home

from the publisher, after enjoying Dos Caminos Tacos: 100 Recipes for Everyone’s Favorite Mexican Street Food so much. So I thought I might find something there.

Success! Her refried beans start with dried beans, which I heartily approve of, and use avocado leaves and bacon for extra flavor. I used my own recipe for cooking the dried beans (and I used heirloom beans for that matter) with lard, onion and garlic. And I made the unfortunately necessary substitution of anise seeds (just a few) and bay leaves for the unavailable avocado leaves and feta for cotija cheese.  I also drizzled my beans with Mexican crema. The recipe was perfect. Sammy especially went crazy–so crazy that, as I mentioned before, she more or less refused to even try the chilaquiles, instead eating refried beans the whole night!

And as for the book itself, it is a winner. The assortment of dishes is wonderfully varied, reminding us that in other countries street food does not mean only meats cooked on a grill, or even just the taco fillings of the ever increasing (delightfully so) taco trucks in this country. Street food could be a stew, a meat that has braised the entire night before, popsicles, corn, drinks…. of course it is the braises and stews that I am most attracted to, and will return to as the weather grows colder, but there is something for everyone. 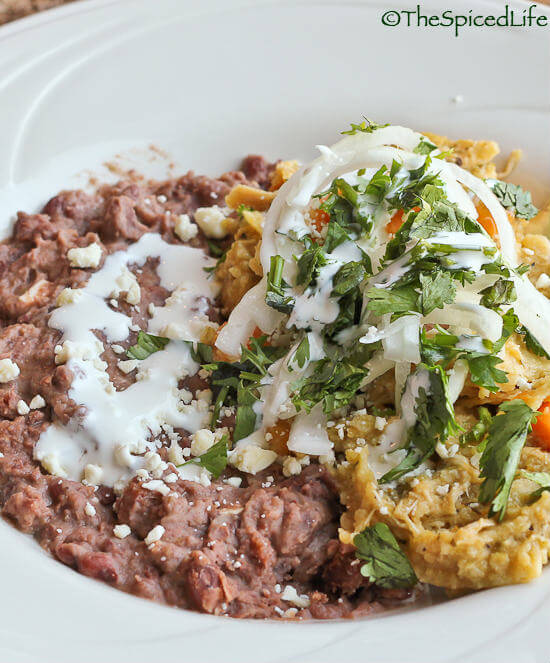 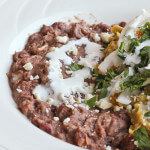 Print
My Refried Beans (Mi Frijoles Refritos)
Recipe shared by permission of Skyhorse Publishing. From the author: Lots of people have a favorite refried bean recipe, but I think my Dos Caminos version is special because we use avocado leaves and bacon, which adds a smoky flavor. They’re definitely better than what comes out of a can. When we were very young children, one of the first foods my parents ordered for my sister and me were black bean tacos in a small storefront Mexican restaurant in Denver, where we ate weekly. They are a simple, approachable food for any age.
Cuisine: Mexican
Author: Ivy Stark
Ingredients
Instructions
« Inverted Shepherd’s Pie: Ground Beef with Dijon Mustard and Veggies on Smashed Potatoes: Using Community Cookbooks
Chocolate Chip Cookies made with an Assortment of Chocolate: #CreativeCookieExchange »