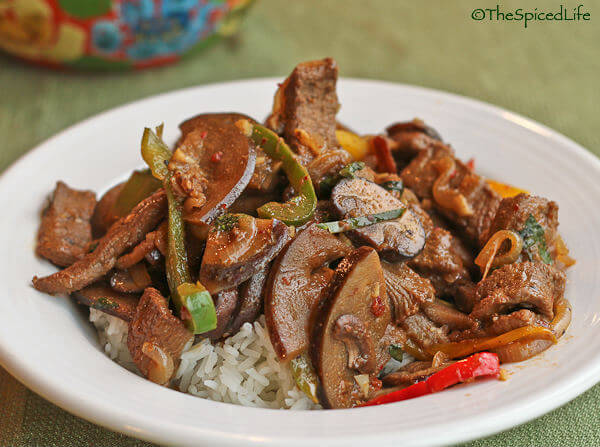 I don’t know why I thought we would have a mild, pleasant fall. After all, it was one of the coldest, wettest summers ever, so why should I expect the sun and warmth of late September to last? And of course it did not, the temperatures dropping all of a sudden to below freezing all of last week. Which meant everyone raided their gardens to get the last of summer’s bounty that was still holding on but which would not survive a hard freeze. I got to my basil too late, but a co-worker of John’s brought him a collection of bell peppers–green, red and yellow–and an eggplant.

from the Lisa Ekus Group, which is handling its promotion this fall. At first I was not sure what to think. I have spent so long learning to become the kind of Thai cook that does not take shortcuts and who tackles complex curries, that I was not sure if a book about making Thai food quickly was for me. But then I realized: this is not a book about taking shortcuts. Instead, this is a book about the kinds of delicious Thai meals that can be made quickly. And for me, primarily, this meant it was an outstanding source for stir fries. I have at least 4 or 5 bookmarked, and if the success of the first one is anything to go by, I will be making them all plus more. 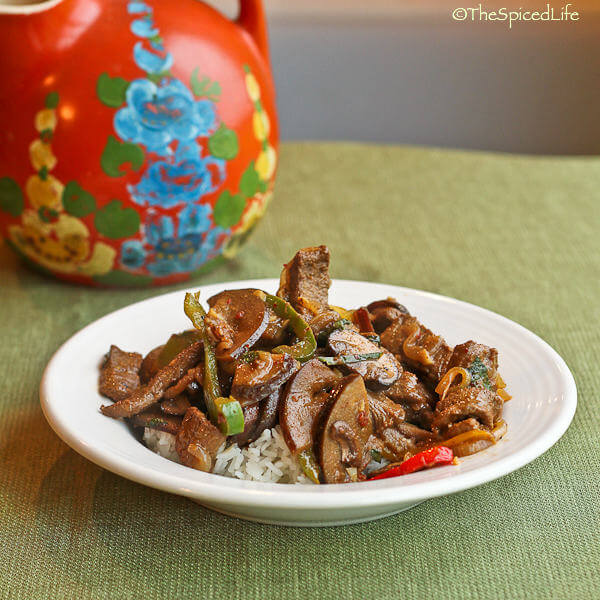 This was a huge hit with everyone in the family. Even Sammy, who claims to hate steak! (I did not mention it was beef and she never asked–she was too busy ogling the mushrooms!) The seasoning stayed true to the recipe, except, see comment above, I only had windowsill basil to work with, so the basil was cut in half. And I took out the chile pepper because of my kids (John liked this dish with Sriracha Hot Chili Sauce

). What I stir fried, though, had a lot more veggies than called for by the recipe. First, because that is healthier. Second, because my kids will eat anything with mushrooms enthusiastically. And last, because I had all those peppers and the eggplant, and I did not want them to go to waste. The mushrooms and eggplant especially have a lot of water, so I recommend stir frying them first, separately, just like you will the beef. This will keep it all from steaming. The extra veggies also mean more oil is used, but I consider that a worthwhile tradeoff to get more veggies in the meal. Also, the recipe below is cut in half from what I made, since I had all that produce to use up (which lasted us 2 nights).

One of the secret ingredients in this dish (which is why I knew it was going to be fabulous before I even made it) is nam prik pao. Nam prik pao is a Thai chili paste (jam) that automatically improves everything it touches. I used to avoid recipes calling for it because of the added work of making it, but then I learned from Leela over at She Simmers that commercially prepared is quite acceptable. Now I use it all the time. And so should you! 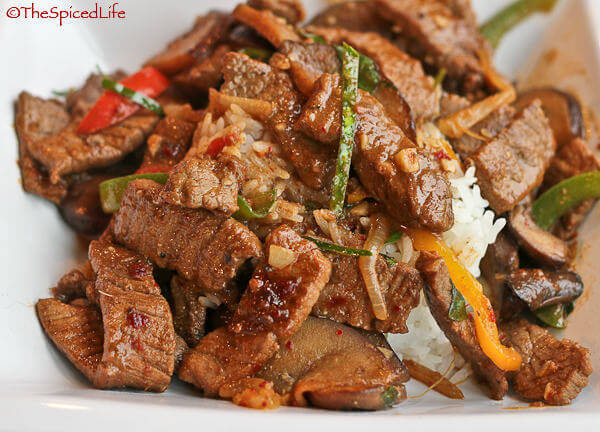 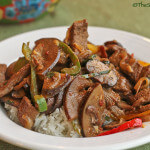 As always, affiliate links were used in this post. Also as always, they were only used where I would be linking to an item anyway. Also, I did receive a copy of Everyday Thai Cooking for free for the purpose of reviewing it; all opinions are my own.