You are here: Home / beans / Stewed Summer Green Chicken With Beans And Corn 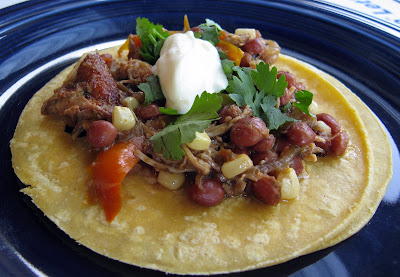 This stew was born of surgery recovery. I am feeling a lot better these days, but still not great. I am smelling strong smells, but not subtle ones, and my head is still congested and full of sinus pressure. And other gross things I won’t mention.

So while simple baking continues to relax me, dinner has just felt really overwhelming. In the meantime I had some great summer bounty calling my name from the fridge and countertop, lecturing me about wastefulness and not taking advantage of local produce at its peak.

So first I spent Saturday roasting an entire cookie sheet-full of tomatillos, which I then blended and froze in muffin cups. I reserved about 2 cups for this dish. Then I roasted some poblanos my husband bought at the farmers’ market that morning–maybe 4-6 small/medium ones, and set them aside in the fridge for the next day. And before I go one step further I will warn you this was indeed imprecise Laura cooking at its prime. I did not measure a thing. However, I feel confident that if you combine the following ingredients in the following manner, you will have success, even if it is not identical to my creation. I should also say that such imprecision always leads to ginourmous results–I froze half of this for later. If your brain is operating better than mine, feel free to downscale it somehow. 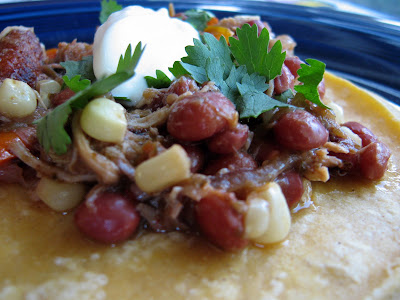 On Sunday I knew I wanted to do something with a salsa verde. I thought about casseroles in particular, layered with corn tortillas. But I just could not summon the energy. Finally I decided that days like these were made for slow braises–my version of crockpot cooking although I do not use a crockpot (but you certainly could for this dish). I roasted onions, garlic and those awesome stripey green tomatoes from my mom (she brought me more this past week–aren’t moms great for taking care of you when you feel cruddy?) and dumped them into the blender with the blended tomatillos. I added a handful of cilantro, tender stems and leaves (I HATE wasting cilantro stems), the juice of one lime, some salt and pepper and let it roar.

In the meantime I started Santa Maria Pinquito beans soaking in a bottle of Corona (you can use any beans you want–I prefer lighter colored beans with green sauces) and browned 2 bone-in, skin-on chicken breasts in a few drizzles of olive oil. When prepping white meat for braising I am much more liberal with the fat since the meat itself does not have much.

Then I removed the meat, sauteed a sliced large red onion, and then dumped everything back into the pot (I used a 5 qt oval Le Creuset dutch oven). Brought it to a boil, covered it with parchment paper and the lid, put it in a 275 degree oven, and walked away, breathing a huge sigh of relief. 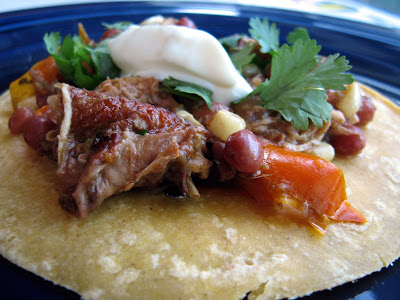 And took a nap.

I hate being congested.

OK the truth is I did come back about an hour before dinner and add some more veggies. But still, it was so nice to not think about dinner for most of the day. I got seriously spoiled while the moms/grandmas (my mom and mother in law) were here, taking care of dinner. 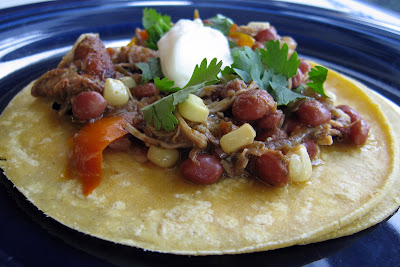 2 bone-in, skin-on chicken breasts
1-2 T olive oil
about 2 cups pureed roasted tomatillos
4-6 roasted poblanos–I removed their core but did not bother peeling
4 very small or 2 small-medium onions, cut into wedges (I used white)
2 heads of garlic, sliced in half for roasting
4-5 small green tomatoes or other ripe heirloom tomatoes of choice–the tarter the better
juice of one lime
one handful of cilantro–tender stems and leaves
1 bottle of lager
1 lbs of dried beans, light colored preferably
1 large red onion, sliced
corn sliced from 3 small or 2 large cobs
2 sweet bell peppers, sliced
2 slender zucchini, cubed (ok I forgot this but decided it would have been lovely and am adding it to the leftovers tonight)

Pour the beans into a bowl and cover with the bottle of beer.

Spray a jelly roll pan with nonstick spray and layer the onions and garlic on it. Roast in a 450 F oven. After about 10 minutes, when the onions are starting to char a little but are still not done, add the tomatoes. After another 5 minutes or so, remove the veggies and add them to the blender, where the pureed tomatillos should be waiting. Add the juice of one lime and the cilantro and puree. I like to keep mine a little chunky so I run it on low for a brief time.

While the veggies are roasting, brown the chicken, skin side down, in olive oil in a medium sized dutch oven. Remove the chicken when done and turn off the heat.

When the green sauce is ready, turn the heat back on and saute the sliced onion for about 5 minutes. Then add the chicken back into the pan with the green sauce, the beans and the beer. Stir it briefly to get it mixed and bring to a boil.

After it boils, cover it with parchment paper and then a heavy, tightly fitted lid and place in a 275 F oven. Walk away for at least 5 hours.

An hour before serving, prep the other veggies and add them into the pot. Stir briefly again. Make sure your beans seem about an hour from doneness–if they are still really hard you may need to wait longer. I like the Santa Maria Pinquitos precisely because they are reliable in this situation.

Before serving, taste for salt and pepper and make sure the beans are done. Served with cilantro and sour cream on corn tortillas. Make sure you remove the chicken bones and remain aware of them, since cooking the chicken this way causes it to melt off the bone and fall apart.