You are here: Home / cakes / A Streak Comes To An End: Glazed Vanilla Bean Cream Cake 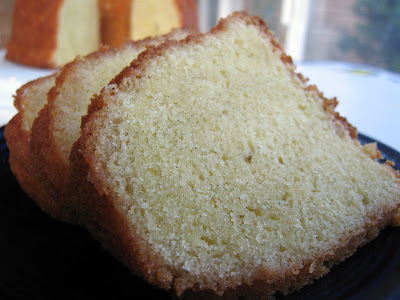 I have had such luck with my Nordic Ware bundt pans that I think the fault is mine for even attempting this cake in a bundt pan. In my defense, I have had other recipes which called for parchment paper in tube pans come out fine in a bundt sans parchment paper, but this time some of it stuck. Not too badly as you can see, it looks rather moth eaten (nice thought, huh?), rather than broken in half or anything, and frankly it was so good (and just for us here at home) that I really didn’t care. But I guess you should make it in a tube pan, the bottom lined with parchment paper, as instructed, rather than a bundt pan. 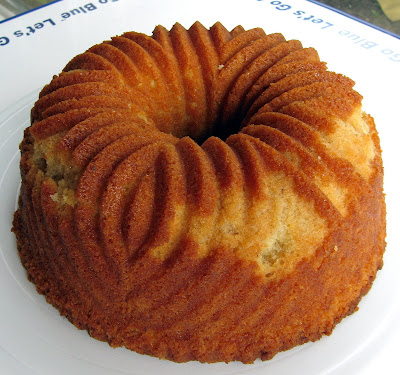 Alex in particular went hog wild over this. She is usually all restraint when it comes to finishing desserts, and Sammy the sweet tooth, but Alex finished Sammy’s and begged for more, shouting about how much she liked the cake (I don’t think Sammy disliked it, but she had 2 slices from a mini loaf and I think she thought one was enough). In fact, Alex took 2 of these photos–my little budding 3 yr old food photographer! 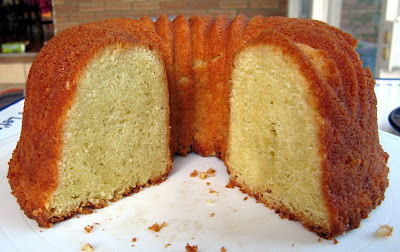 I had a dilemma over the “flavor enhancers”–almond extract and rum, neither of which I like particularly, especially the rum. Almond extract I like in some things but I just could not see it in this, something where vanilla is the star. And I know I should trust Lisa Yockelson, she has never let me down, but, well, I went with my gut and did not use it. I thought about using lemon, but when I can only faintly taste lemon, I get frustrated and wish I could really taste lemon, in which case the dish would no longer be vanilla, it would be lemon. So I took a risk and used Kahlua. 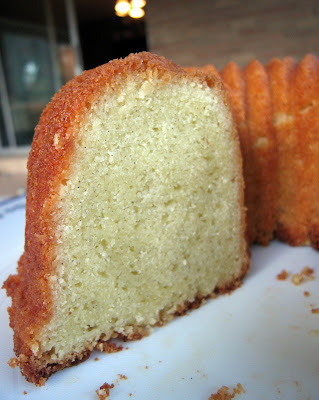 It actually turned out really well. I cannot remember the last time I had such trouble keeping out of raw cake batter. We’re talking cookie dough trouble. And the finished cake? Unbelievable. Count me with Alex. 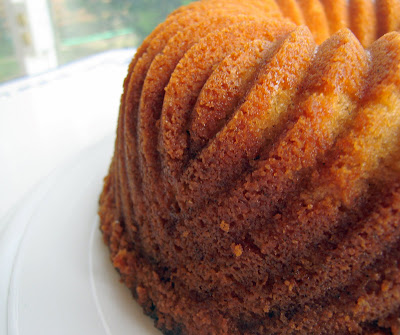 You could not taste the Kahlua, but it did somehow change things. I asked John if he could guess the secret ingredient, and he was unwilling to guess because he just was not sure, but said later that he suspected Kahlua–maybe because I left it out on the counter. Duh. 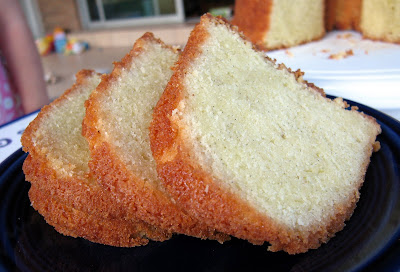 Preheat the oven to 325 F. Prepare a 10 inch tube pan by cutting out parchment paper to fit the bottom of the pan. Spray the pan with nonstick spray, line it with the parchment paper, and then spray with Baker’s Joy (or use homemade shortening plus flour).

Sift together the flours, salt and baking powder. Set aside.

On low speed, add the sifted dry mixture in 3 additions, alternating with the cream in 2 additions, beginning and ending with the dry mixture. Scrape down the bowl as needed. End by folding the mixture together, scraping the bottom of the bowl, to make sure it is all incorporated–but be sure to not overmix.

Pour and scrape the batter into the prepared tube pan. Smooth the top gently and gently shake from side to side to even it out.

Bake the cake for 80-85 minutes. Check on it halfway through to rotate the pan if necessary and also check about 2/3 of the way through to make sure it does not need to be covered with foil from darkening too fast (mine did need to be covered–that seems to be a constant refrain with this oven). The cake is done when a thin knife or wooden skewer inserted into the cake comes out clean. The baked cake will pull away from the sides.

While the cake is baking, make the glaze: Stir the 2 inch vanilla bean pieces, water and sugar together in a small, nonreactive and heavy saucepan. Put it on low heat until the sugar is dissolved, at which point turn the heat up to medium high and bring to a boil. Reduce the heat low enough to maintain a vigorous simmer for 3-4 minutes. The liquid should reduce but not become viscous. Add the vanilla extract and Kahlua and simmer an additional 30 seconds. Set the pan aside and wait for the cake to bake (you can discard the vanilla bean pieces if you want).

When the cake comes out, place it on a cooking rack to cool for 5-10 minutes. Carefully invert the cake onto the cooling rack, remove the parchment paper, flip it again, and brush it with the glaze all over–tops, sides, and interior (place wax paper or foil under the cooling rack). Use up all of the glaze–it forms a wonderful crust on the cake, preserving freshness and providing a sweet crispiness. Let the cake cool completely before slicing. 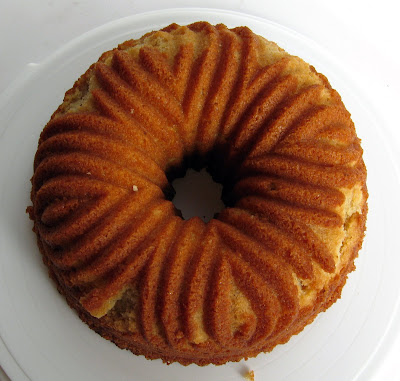