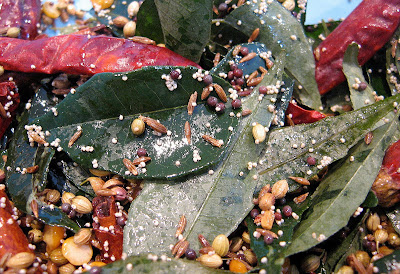 I found out today that it is time to schedule my daughter for her kindergarten testing and pick up her registration packet. I am in a state of denial. I am very much not ready for her to go to school every day! I know it will make many things easier and I know she will love it (she is the classic teacher’s pet, loves school, loves learning, loves her classmates and teachers) but nonetheless I’m freaked out. It has all gone too fast! 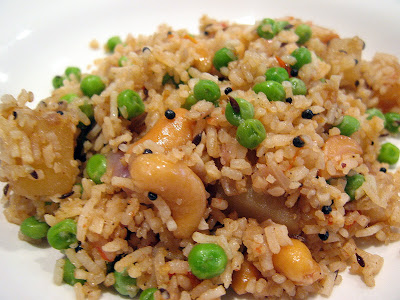 Of course if we don’t all stop being sick we will never go anywhere. Now she is sick (yes again), I am still sick, and so far March is no better than February. 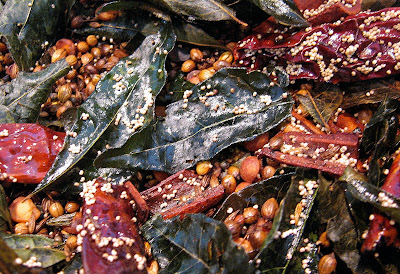 This is what the spices look like after roasting, although my curry leaves had been frozen and hence did not get quite crispy enough, which is why I call for frozen items to be added to the skillet first.

Our local farmer’s market has an Indian woman who sells curries, and John and I stocked up a month ago. They make great dinners when I am too tired to cook. However, they do have one drawback which is that they tend to be way too spicy for my kids, even the mild ones, even blanketed with yogurt. So this past weekend, I decided to make a rice pilaf for the kids but not cook anything else, instead defrosting one of those curries. It was a great plan except I chose a pilaf that required me to make a spice mix first. I promise it is not that complicated, and as long as you own a grinder and an Indian pantry it is not hard. But I confess it did turn into a wee bit more work than I meant it too. 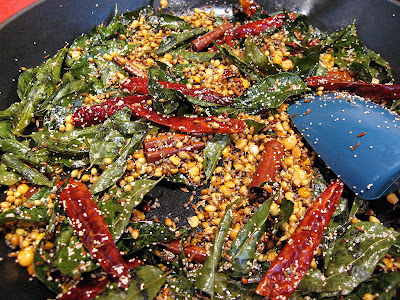 That’s ok, it was worth it. And now I have lots of extra Sambhar Masala to play with! 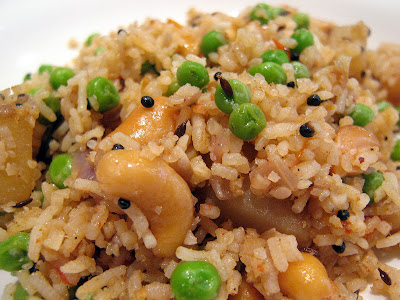 A Sambhar masala is a unique South Indian spice blend that makes use of roasted yellow split peas which are then ground with other spices. Raghavan Iyer suspects they are the only people in the world to do this; unlike some masalas, this one cannot be substituted for with garam masala. Instead I recommend you try making the spice blend yourself and then experiment with what other dishes use it. A second option would be to buy the spice blend, which Iyer of course does not suggest (he is big on making your own), but I noticed that Monica Bhide in Modern Spice, strongly recommends the MTR brand of Sambhar powder. Be aware that (I suspect anyway) storebought powder will much hotter, one reason I choose to make my own, given Alex’s heat-phobia. 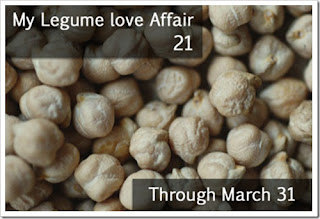 I am submitting this dish with its peas, and especially this masala, since it is actually made with legumes, to My Legume Love Affair-21st Serving. The event, which was started by Susan of The Well Seasoned Cook, is being hosted this month by Mirch Masala. 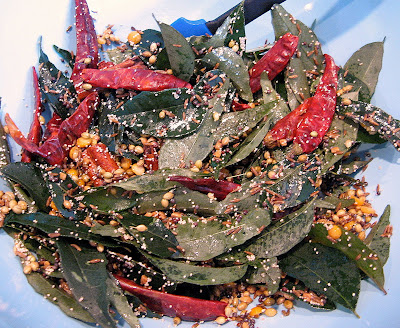 If you have any frozen ingredients, separate them. Toss all ingredients (in 2 bowls if some are frozen) with the oil (just split it up if you have some frozen ingredients). Heat a medium-large skillet over medium high heat. When it is quite hot, add the ingredients. If you have a separate frozen pile, add it first and let it roast for 1 minute before adding the rest of the spices. Keep tossing and stirring the spices to prevent burning. Roast them for 3-4 minutes, until the curry leaves are curled, dry and brittle, the chiles blacken slightly, the split peas turn dark brown,the coriander, cumin and fenugreek turn reddish brown, and the mustard seeds pop, swell, and turn grey-black. Immediately remove the mixture to a wide shallow bowl or plate to cool. Let the mixture cool completely.

Grind the mixture to a fine puree. Iyer suggests a spice grinder; I used my Preethi wet/dry grinder. It may need to be done in multiple batches. The spice blend can be stored in a sealed container in a cool, dark place for up to 2 months. Iyer recommends against storing in the fridge or freezer. 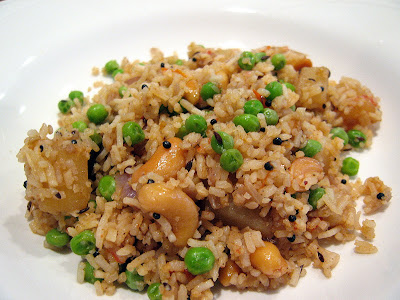 A note about the rice: Leftover rice works best. However, you can make basmati (basmati in particular, because it is a fluffy rice) and then immediately spread it out on a cookie sheet and place it in the freezer or fridge to cool and dry out. The colder and drier the rice is, the better.

Preheat a large skillet or wok over medium high heat–I started this in my wok-shaped stainless steel pan but quickly had to switch to my 14 inch saute pan–make sure your pan is large. Coat the surface (and sides if using a wok) of your pan with oil. When it shimmers, add the mustard seeds and cover the pan while they pop, about 30 seconds. Then add the cumin seeds, which should instantly sizzle and turn reddish brown. Be ready with the onions so they don’t burn.

Add the onions with a pinch of salt as soon as the cumin seeds are reddish brown, as well as the sesame seeds and nuts–if using raw nuts. Cook for 2 minutes and then add the potatoes wit another pinch of salt. Stir fry this for 5-10 minutes, until the onions are caramelized brown and the potatoes are tender.

Add the curry leaves and Sambhar masala and mix them in. Then add the rice (and nuts if using roasted ones–expect your nuts to have gotten a dark reddish brown, unlike mine, if you are using raw). Gently toss the rice with the other ingredients–you want to evenly incorporate the rice into the dish, frying it, but not breaking the grains. After about 3 minutes, add the tomatoes and peas. Stir fry until the dish is hot (the peas will cool it down). Sprinkle with cilantro and serve.