You are here: Home / beans / How To Rescue A Bean Soup 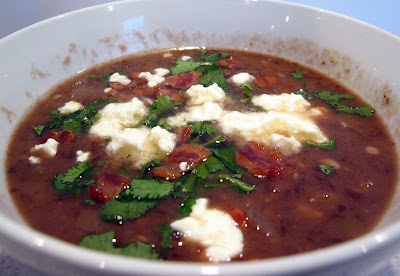 I thought about not including this recipe. I mean, it is not very different from some other recipes I’ve had on here, bean soups are not exactly photogenic, and it initially was not a success anyway. But then I thought maybe that in addition to sharing the recipe, I would also share with you how I go about rescuing a recipe I am not happy with.

First, the recipe itself and why I was not happy with it. It is a Rick Bayless recipe for Drunken Bean Soup, but unlike my previous version of drunken bean soup (and most I have seen), this one called for tequila added at the end, rather than beer simmered at the beginning, which I found intriguing. Suffice to say it was way too inebriated for this family. It had the smoky flavor of bacon, both in the soup itself and simmered with the dried beans, roasted chile peppers, onions, garlic, cilantro and beans. Without the tequila, it was decent but flat. With the tequila, well, it made me feel like I had been out too long the night before. Which I guess was the point, but I don’t like tequila enough for that. The whole family pronounced it ok but they were clearly un-enthused as well.

John was skeptical about keeping it (for multiple nights of leftovers), but beans simmered with bacon, onions and garlic make a great canvas. There was plenty of potential in this soup, especially because (instinct?) I had been careful to add the tequila to bowls, rather than to the soup in the pot. The next night I first added one can of Muir Glen’s fire roasted tomatoes. Plain tomatoes would work ok, but fire roasted are better. I let that simmer for a bit while waiting for John to get home. When he got there, I added several tablespoons of cider vinegar. I served the soup with the bacon and cilantro, as I did the night before, and also added feta cheese (queso fresco would be even better) and chipotle powder (the latter just to the adults’ bowls). 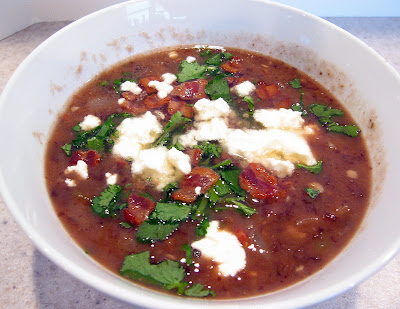 It was a knockout. The tomatoes gave more interest and depth to the soup, and the vinegar woke it up (I actually put extra vinegar in mine, but John says his did not need it, so this is clearly a “to taste” thing). I had to restrain myself from seconds (bean soup is really filling), and the rest of the family ate a lot more enthusiastically than they had the previous night. And hey that is 2 more dinners now I don’t need to pay for or cook (I had doubled the recipe as it is written below).

One of the best things about soups is that the fat lady never really sings on them–as long as they are still simmer-able (i.e., don’t add seafood, curdle-able dairy, etc), you can fix most soups, especially if their problem is too bland, as opposed to just plain awful. Acids are especially good in this regard: tomatoes, citrus juices and vinegar. Salt (or soy sauce or fish sauce) and sugar (or honey, brown sugar, maple syrup, etc) are also effective depending on the problem. If the soup already makes use of spices, or has compatible flavors, spices can work as well. I did not use any in this because it honestly never occurred to me, since there were no spices in the original and I was pretty sure tomatoes and vinegar would do the trick. If you are uncertain–I was not in this case but have been so in the past– ladle a small serving and play with it, that way you don’t risk messing up the whole pot. 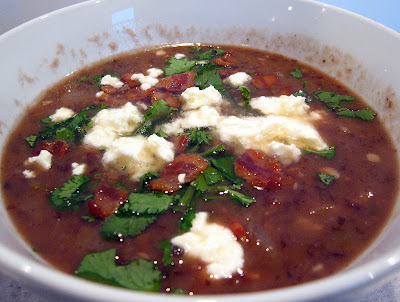 The Final Bean Soup
Recipe by The Spiced Life, beginning with a Rick Bayless recipe but bearing absolutely no resemblance to it in the end

Garnishes:
chopped cilantro
more cider vinegar
feta cheese or queso fresco
chipotle powder (could also cook canned chipotles directly into soup, to heat tolerance, but I was serving kids and did not want to serve sour cream with this soup to cool it down)

Begin by cooking the beans, which you could start a day or 2 in advance if necessary. Place the rinsed beans into a 4 qt sauce pan and cover them by about 2 inches of water. Add the bacon fat, onion and garlic and bring to a vigorous boil. After boiling for 3-5 minutes reduce the heat to low, cover, and simmer. Check on the beans occasionally to see if they need more water–remember that water is the only liquid going into the soup and it can always be boiled off later. After an hour or two (or more, depending on age of beans), when the beans are mostly tender, add the salt. I start with a 1/2 teaspoon or so, and then taste every 5 minutes, adding more as needed. Be sure to simmer the beans for at least 10 minutes after the final addition of salt, so that the actual beans have absorbed some salt, rather than just salting the liquid. Set the beans in their liquid aside.

Heat a large sauce pan or medium Dutch oven over medium-high heat. Add the olive oil and bacon, and reduce to medium. Cook the bacon until the fat has rendered and the bacon is crispy. Using a slotted spoon, remove the bacon. Pour off all but 1-2 T of bacon fat (reserve that fat in your freezer!). Add the onions with a pinch of salt.

Cook the onions until browning, about 10 minutes. Add the garlic and roasted chile peppers and cook another minute. Add the fire roasted tomatoes and cook for 1 minute. Add the beans with their broth to this, stirring to mix it all together. Bring to a boil, cover, and reduce heat to simmer for 15 minutes to meld the flavors. At this point, check the consistency of the soup. Do you want the beans whole but the soup thicker? In that case, turn off the lid and simmer briskly. Do you want a creamier soup? In that case, using a blender or an immersion blender, puree as little as 1/4 of the soup or as much as all of it. If it’s perfect, leave it alone! I pureed about 1/3 of mine with an immersion blender.

Add 1-2 T of cider vinegar and taste the soup for more vinegar and salt. Serve the soup with chopped cilantro, queso fresco and the reserved crumbled bacon.