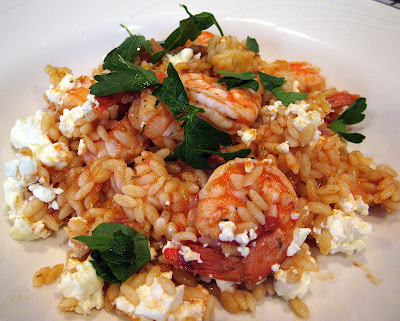 I am on a roll, people! It was probably that stomach virus, making me desperate for my whole family to be eating good food, but I have made several stellar dinners in a row now. Indian stew, sauerbraten, and now this Greek shrimp casserole. The latest was inspired by the most recent (as of my writing this) Cookstr newsletter. It featured casseroles, a homey approach to dinner near and dear to my heart, and I immediately copied about half of them. This shrimp recipe stood out the most to me. 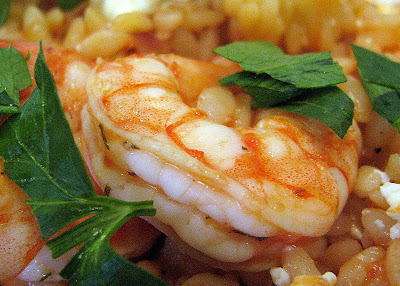 As written, Susanna Hoffman’s casserole (which is no longer on the site or I would link you there) is a sophisticated approach to dinner, calling for crusty bread to sop up its juices. While I have no doubt that that would be lovely, we have no boulangerie in town at which to acquire said crusty bread and making it requires a day’s start, which I did not have. So instead I decided to toss the shrimp and sauce with orzo, a traditional Greek pasta accompanying many stews and sauces. I have no idea if they would put it in a casserole–but they should if they don’t! Next time I would add more onions and some zucchini (which is how I wrote the recipe), for color, texture, and also for health as it could replace some of that very tasty but ultimately starchy orzo. 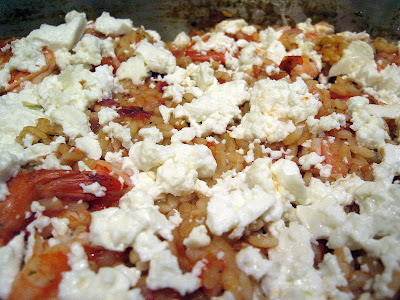 On a barely related note I would like to add that I served this with a salad drizzled with a strong, good Greek extra virgin olive oil (Kalamata Gold for those who are interested), the same one I used to make the casserole, and Wow. I have now had my second olive oil epiphany. When I purchased it from the Mediterranean Foods Imports store in Columbus I discussed the choices with the very nice woman working there–I decided to go with a strong tasting oil. She said some people find it too rich on the tongue. Count me NOT among them! I suspected I needed a stronger tasting olive oil because in the past I have nbver been able to discern its benefits. That is certainly changing! 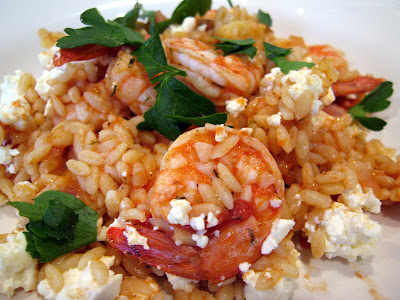 2 T Greek olive oil
1 large or 2 medium onions, chopped
6-8 cloves garlic, minced
1-2 zucchinis, diced, optional (use more orzo if you leave out)
6 medium tomatoes, peeled and coarsely chopped (I used frozen tomatoes from last summer–this recipe has not been tested by me with canned tomatoes, which do have a stronger flavor)
1/2 cup white wine
2 T Metaxa or another sweet brandy (I used Calvados to good effect)
1 T tomato paste
2 T fresh dill or 2 t dried dill
1/4 t freshly ground black pepper
2 lbs medium shrimp, peeled and deveined (I left the tails on bc I am lazy)
8 oz feta cheese–I used a French feta because it melts nicely but the most important thing is to use a good, imported feta cheese, not one of the pre-crumbled deals
12-16 oz dried orzo (use less if using zucchini, more if not)
1-2 T butter

Boil the orzo until al dente and drain. Toss with the butter in a large bowl and set aside.

Choose either a medium-large (in my opinion, the all clad roaster that I own was too big) casserole pan OR a 14 inch deep saute pan works also that is safe to go on the stovetop. Heat the pan over medium heat. Add the olive oil and then add the onions (and zucchini if using). Cook them for 3 minutes and then add the garlic. Cook this, stirring, until it is softened and beginning to be translucent, about 5 minutes. Add the tomatoes and simmer briskly for 5 minutes. 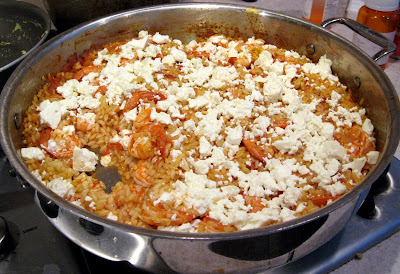 Pardon the hole in the lower left of the casserole, but my daughter could not wait for dinner! This is the pan I chose to use, clearly not a traditional casserole dish.

Add the brandy, wine, tomato paste, pepper and either all of the dried dill or 1 tablespoon of the fresh dill. Simmer briskly for another 10 minutes, stirring occasionally. Add the shrimp and cook, tossing occasionally, until the shrimp turn pink and curl, about 2-3 minutes. Add the orzo and mix in thoroughly. Crumble the feta evenly over the top of the casserole and place it in the oven.

Bake until the feta is melted, although be aware that the softened, warm feta will retain its shape–it is better to not let the feta melt completely than risk over cooking the shrimp. If you were using fresh dill, sprinkle this over the finished dish. Otherwise, if you would like something green (the zucchini works if you used it), sprinkle each dish with a few sprigs of parsley.