Goan Curried Beef With Coconut Milk, Vinegar and Potatoes is an unbelievably easy and delicious twist on meat and potatoes. It whips together in moments, and hours later you have a meal fit for a king. Affiliate links have been used in this post to link to items I am discussing. 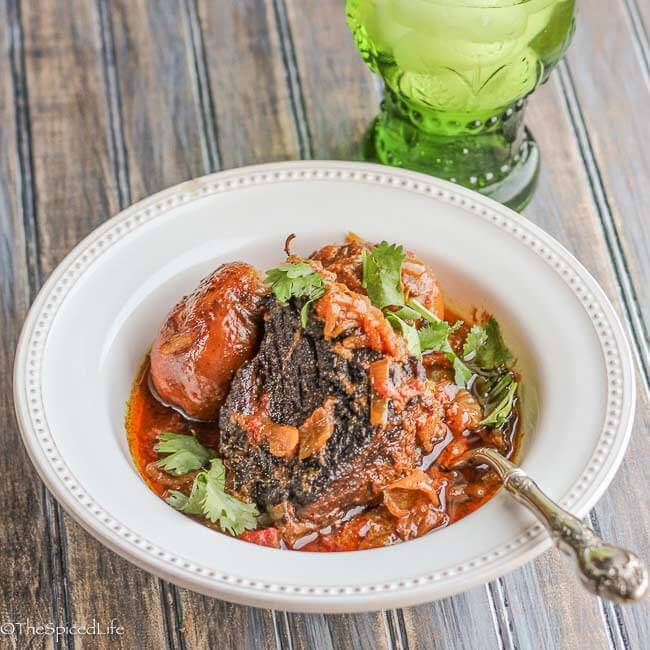 Do you have any idea how exhausting a museum excursion is with 2 toddlers?

We spent today at the Cincinnati Children’s Museum as well as the History Museum (which is in the same location and our pass gets us in to either), and we had a blast. But it is an hour away, our first attempt at leaving failed when the car died (we shifted the car seats to John’s car) and we needed to stop at Best Buy and the grocery store on the way home, and let’s just say that by the time we got home nobody was very cheerful, we ate take-out burritos for dinner, and every key that I hit feels like a cardio vascular exercise.

OK maybe not that bad but you get the point. 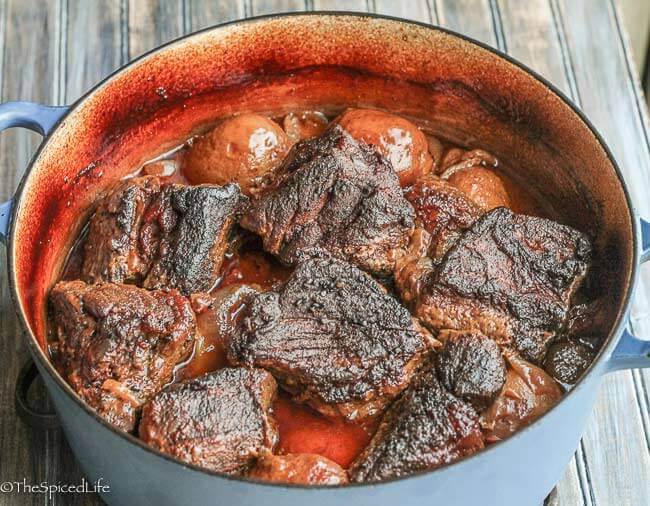 Which is a shame because I am in danger of backlogging on recipes but I have to get across to you somehow how incredibly spectacular that Indian dish I made was. It was run-don’t-walk to get the ingredients kind of good, especially because in another month or 2 none of you will feel like making it. Unless you live in Canada, in which case I give you 3 months maybe. 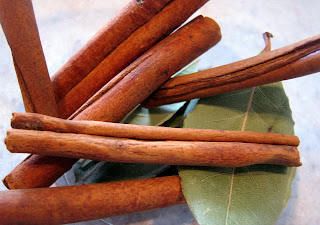 ; Iyer called it a stew, but for us it was more of a braise. He calls for something like a pound of chuck cut into cubes, but for us chuck is almost always packaged and frozen in 3 lbs pieces, frequently bone-in–plus I hate the idea of cutting chuck into 1-inch cubes and stewing them quickly. I am more of a slow and low kinda girl. But I did not correspondingly increase the liquid, just the potatoes, which meant that the sauce was thick and rich and out of this world–but technically healthier than tripling the coconut milk would have been anyway. And the resulting sauce is AH-mazing over the potatoes.

[I adore this dish–so much that I have made it several times in the years since posting this. So I came back in November 2015 to update the pictures.] 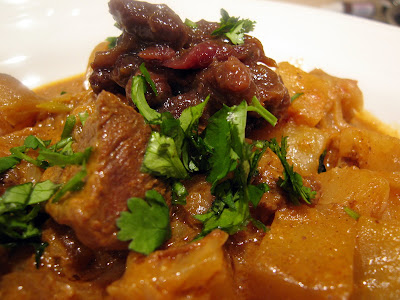 Welcome to my photography circa 2009! I used a lot less chile powder in this version, but otherwise it is identical to the other photos.

This is a Goan dish, probably influenced by Portuguese merchants. That latter point is a guess on my part–Iyer does not mention it–but the presence of beef and vinegar indicate that to me. In vindaloo, the vinegar is an influence from the Portuguese merchants who carried wine–but because of the long trip some would sour and they would find a cooking use for it. It stands to reason since this is a Goan dish also that the same would be true. And beef is so rare, at least to me, in Indian food that it seems like a European influence as well. So that’s my dime store analysis of the origin of this dish–take it for what it is worth (probably not much).

I served this with a Carrot Cashew Salad, which I am glad we made but I don’t know if I would call it a repeater. I am going to share the recipe because I am always on the lookout for easy Indian veggie dishes to serve with curries, and I definitely think this one is worth trying. I found the base recipe in Yamuna Devi’s amazing Lord Krishna’s Cuisine: The Art of Indian Vegetarian Cooking

. I am not guaranteeing you will fall in love with it–it’s flavors are a little unexpected to this American’s palate, and my kids were very wary of it. But John and I ate it all–I liked it more the second night; maybe I just had to get used to it? 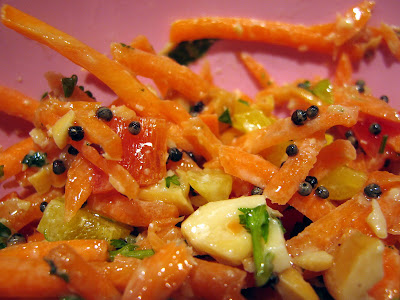 By the way: raise your hand if you knew that turmeric was a meat tenderizer. I sure did not! Cancer fighting super spice, yes. Meat tenderizer, that was new to me. 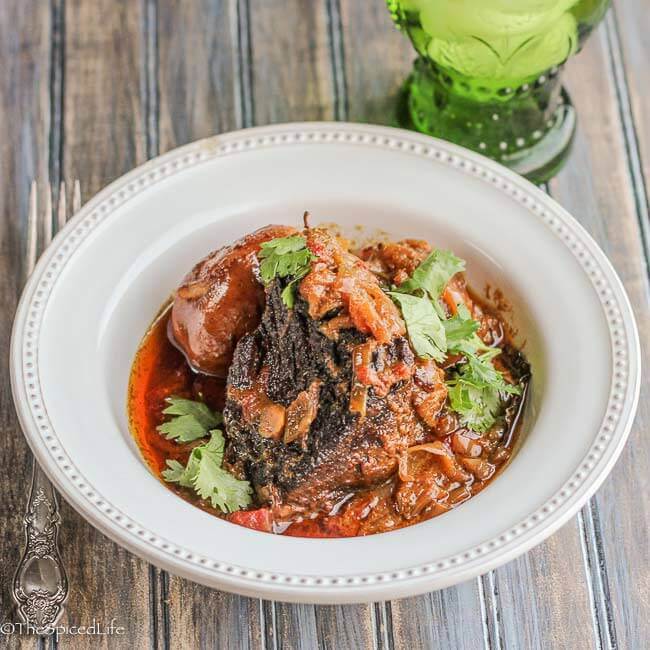 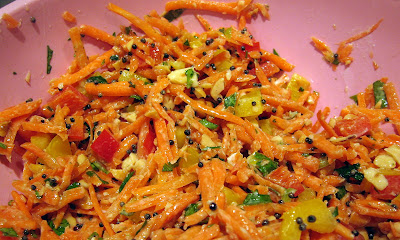 For those who love collages….