You are here: Home / beans / Argentinean Inspired Chili with Peaches 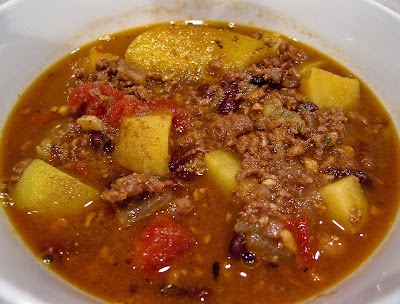 Have you ever noticed how often in cooking a great idea is the addition of 1 or 2 simple yet unexpected ingredients? In this case it was balsamic vinegar and peaches, 2 ingredients which made this “chili” vibrant and delicious. The kids were drinking their bowls and John sighed happily and repeatedly while he ate it. One of the best weeknight meals ever.

I found the inspiration for this dish in David Ricketts’ Home Cooking Around the World: A Recipe Collection

, a little known cookbook whose praises I have sung before (here and here and please cut me some slack as it was before I figured out how to take indoor pictures without a flash!). His version is a beef stew, but it was a weekday and I was looking for simple simple simple. To tell the truth I was totally uninspired and mostly moaning about not wanting to make dinner (yes I have those days too). When I saw this stew had tomatoes in it, I thought to myself why not use ground meat and make it more chili-like, albeit without the actual dried chile pepper. I happened to have organic frozen peach slices in the freezer, and I am always intrigued by fruit and meat, and the addition of the vinegar was even more intriguing still. 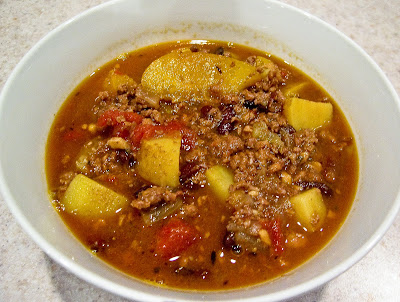 About that fruit and meat and the South American part: according to Ricketts, many Argentinean stews contain fruit. His stew in particular is an adaptation of a complex Argentinean stew that used peaches. I don’t know if the balsamic vinegar was his addition or also Argentinean, but it’s genius either way. 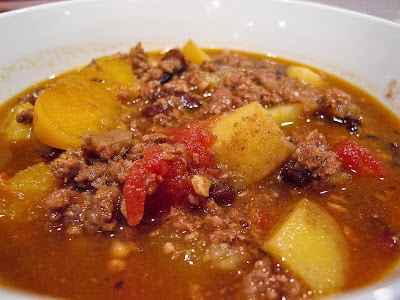 Affiliate links were used in this post, but only to link to items I would already be discussing and linking to.