You are here: Home / Indian recipes / A Respite From Holiday Richness: A Dal With A Rice Pilaf With Potatoes & Peas 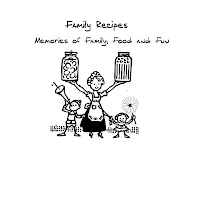 Hey before I forget, we have a new host in the Family Recipes event line-up! Yay! Head on over to Lynda’s Recipe Box for details (ok the details are the same, but still) about Family Recipes-December. The due date this month is December 30. 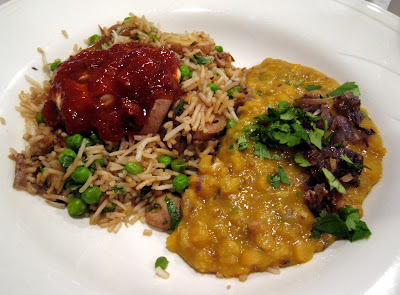 Suvir Saran’s Indian Home Cooking continues to be a winner. I had a houseguest earlier in the week, and I figured that fresh after gorging ourselves on rich Thanksgivng food for multiple days straight, an Indian vegetarian meal might hit the spot. I was right.

I decided instead of serving a dal with rice–which is not traditional but frequently what I end up doing–I would serve the dal straight and make a rice pilaf meant to be enjoyed on its own. The dal was fabulous with or without a chutney, the rice was wonderful with yogurt and a chutney, but I do not think this means the rice failed since Saran mentions that yogurt and chutney are traditionally served with this dish. Both dishes were easy, else I would not have attempted them with a houseguest.

I made the dal pretty much as Saran indicates, albeit with more legumes and less water than he indicates, but the rice dish I changed a bit. I 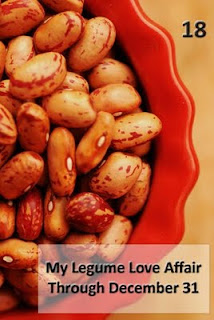 added onions and garlic, thereby perhaps making it not Tahiree, I added more potatoes, and I cooked the rice separately and then baked together all of the cooked ingredients. With all due respect to Saran, I just could not get past the feeling of unease I had when I read that he called for 4 1/2 cups of water to 2 cups of basmati rice–much more water than I would ever use.

I am submitting this meal to The Well Seasoned Cook‘s My Legume Love Affair, 18th Helping. This month it is being hosted by Cooking 4 All Seasons–be sure to head over in January for the round up! 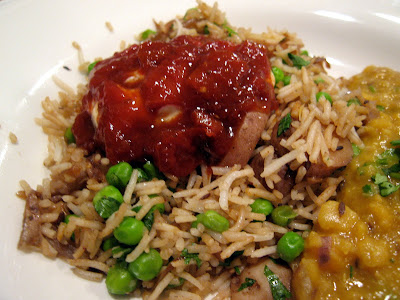 Soak the rice for 30 minutes. Near the end of this time, heat a medium (5 quart) Dutch oven over medium high heat and preheat the oven to 350 F. Set a large pot of water on high heat to boil.

When the Dutch oven is hot, add the oil and whole spices (I put the cinnamon stick in early because I keep them in the freezer). Fry until the cinnamon stick unfurls. Add the onions with a pinch of salt and fry until dark, 15 minutes or so. Keep a small container of water by the cooktop in case of sticking.

In the meantime, add the drained rice to the boiling water and cook until the rice is tender-chewy, but no longer hard, about 2-4 minutes. Drain the rice and place it back in the pot and put a lid over the pot. Set aside.

Add the garlic with another pinch of salt to the onions and cook for 1 minute. Add the potatoes and cook, stirring, for 5 minutes. Then add the turmeric and optional green chile. Stir fry the potatoes another 5 minutes. Add a pinch of salt. Then add about 1/4 cup (I did not measure) of water to the Dutch oven and place a lid on it, reducing the heat to medium low. Check on it in 10 minutes to see if the potatoes are cooked through–when the potatoes are cooked through. Leave the lid off when the potatoes are cooked, increasing the heat to boil the water off. Add the rice, peas, and cayenne/paprika pepper. Stir together. place a lid on the Dutch oven and place it in the oven. Bake for 10 minutes. When it comes out, let it sit for 5 minutes and then sprinkle it with cilantro. Taste for salt. Serve with a tomato chutney (or another chutney of choice) and plain yogurt. 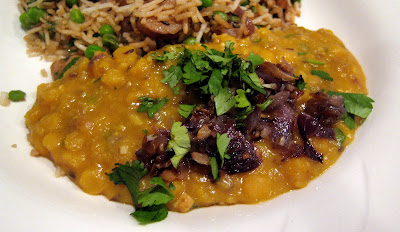 Heat the oil with the cinnamon stick in a large saucepan over medium high heat. Shake, frying, until the cinnamon stick unfurls, 1-2 minutes. Add the cumin, cloves and cardamom, and cook, stirring, until fragrant and golden (it will smell fantastic). Add the lentils and split peas, turmeric, water and a pinch of salt. Bring to a boil and skim well–I had to skim a lot. Turn down the heat and simmer–covered if you like thin, soupy lentils, uncovered if you like them thicker (as I do). You can add water as necessary or even boil vigorously (after the split peas are cooked through, about 40 minutes) to reduce, as needed. Taste for salt. Use an immersion blender to blitz for a moment or 2, just to thicken the dal a bit (Saran calls for removing some of the lentils and mashing with a spoon).

Make the tempering oil by heating the oil in a small saucepan or skillet over medium high heat. Add the onion with a pinch of salt and fry until it begins to brown around the edges, 5 minutes or so. Add the rest of the tempering ingredients and cook another 5 minutes, stirring. Stir half of the tempering oil into the dal. Reserve the other half for garnishing individual servings of dal. Mix in lemon juice and cilantro. We also liked this with a dark, sweet/sour/spicy chutney, like tamarind or I currently have a great plum chutney as well.