You are here: Home / mushrooms / Cream of Wild Mushroom Soup 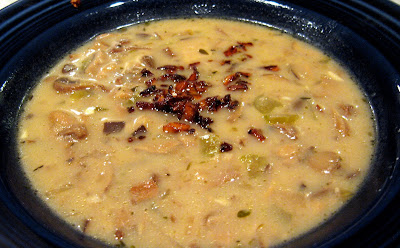 I love mushroom soup. I don’t get to eat it that often, because to me it is a starter soup, not an entree soup, and anyone who reads my bog knows I mostly make entree soups. It is also a little indulgent, depending on how much cream you use.

So when I had the idea to serve mushroom soup at my Thanksgiving I felt like I had struck gold. Pure inspiration. And for once, such high expectations did not disappoint. I am actually thinking if it does not drive anyone crazy (because they’ll eat twice in one month this year) I will incorporate into my Christmas Day tradition, since it will pair well with beef tenderloin, our standby (whereas I do not host Thanksgiving that often).

One of the nicest things about this soup for a big meal is that you can make it ahead in stages. I made the sauteed mushrooms and vegetables and froze them. The day before serving I made the soup to just before the cream is added. The next day I reheated it, simmered briefly, and then added the cream. I also sauteed some wild mushrooms to use as a garnish (ok actually Josie did because she is the BEST HELPER EVER when she comes for these events).

Everyone who likes mushroom soup loved this (apparently John does not care much for mushroom soup–who knew?). I added the bare minimum of cream and then let people add cream to their individual tastes–we had people who like it creamy and people who like it barely creamy. The girls and I like a lot of chunks of mushrooms–but for someone like my dad I would puree the soup a bit more before serving. When he’s here for Christmas I will just avoid the big mushroom chunks! 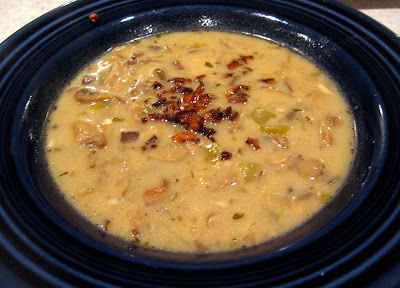 Pour the hot water over the dried mushrooms and leave standing for 15 minutes, until the mushrooms are softened.

In the meantime, remove the rehydrated dried mushrooms (reserve the liquid) and chop them roughly. Add them to the pan. When the mushrooms are browned and starting to stick, deglaze the pan with the mushroom soaking water. Boil the liquid away until only a very little remains. (You may freeze at this point should you desire to.) Then add the thyme leaves, white wine and Sherry. Add another pinch of salt and boil vigorously, stirring, until the liquid is reduced to a glaze, about 6 minutes. 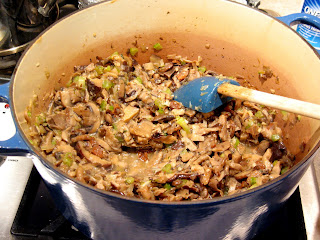 Freeze sauteed mushroom and veggie mix at this point for do-ahead ease (especially handy if you can only get a good assortment of fresh wild mushrooms on a particular day, which is what happened to me).

Mix the remaining 2 tablespoons butter and 1/4 cup flour in a small bowl until you get a smooth paste. Add this flour paste to the mushroom mixture in the pot; stir until the flour mixture melts and coats the vegetables. Gradually pour the stock in, stirring as you pour. Bring to a boil, stirring frequently. Reduce the heat to low and simmer until mushrooms are tender, stirring often, about 10 minutes. (You may chill for 24 hours until a hour before serving at this point.) Stir in cream–add it slowly. If you have any guests who do not like a creamy soup, add less and let others add more at the table. Taste for salt and pepper–if you used a homemade stock, as I did, you will need a pretty hefty pinch of salt. 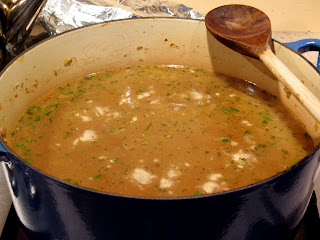 The soup without the cream–it can be ahead the day before up to this point.

Puree soup to desired consistency with an immersion blender–I prefer a much chunkier soup.

In the meantime, melt 2 tablespoons of butter in a medium nonstick skillet. Chop the wild mushrooms for garnish (we used chanterelles) and add them to the pan. Saute them until browned, sprinkling with salt. Sprinkle each bowl of soup with these sauteed mushrooms.

« Creamy Cappuccino Marshmallows
A Respite From Holiday Richness: A Dal With A Rice Pilaf With Potatoes & Peas »