You are here: Home / asparagus / Taste of Testaccio; Asparagus with Sesame and Lemon

Stories of our food tour, “Taste of Testaccio,” in Rome, as well as a recipe for delicious Asparagus with Sesame and Lemon (scroll to bottom if you are only looking for recipe)! Affiliate links have been used to link to products I am discussing. 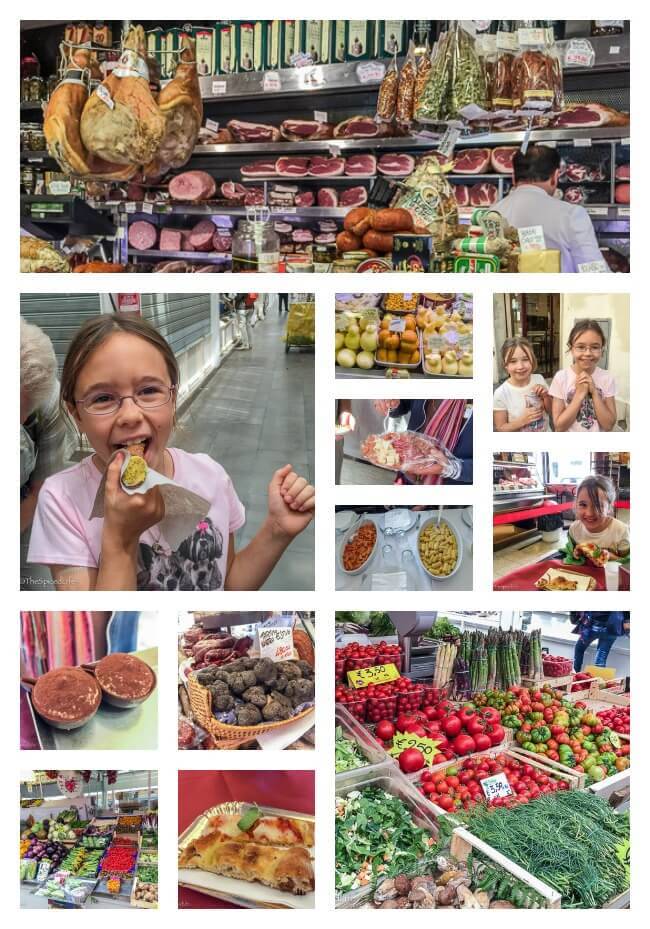 We’re here! You will have to excuse me if I doze off while typing–I am determined to get this post out, but I am still pretty jet lagged. I am dying to get to Rende (Cosenza), where thanks to being there for 4 weeks I will not feel compelled to go go go and pack as much in as possible in 48 hours. People, Rome has been exhausting. My kids have been amazing troopers, but we are all feeling a little ragged around the edges. Our train to Calabria tomorrow is coming just in the nick of time.

But anyway, this awesome food tour! 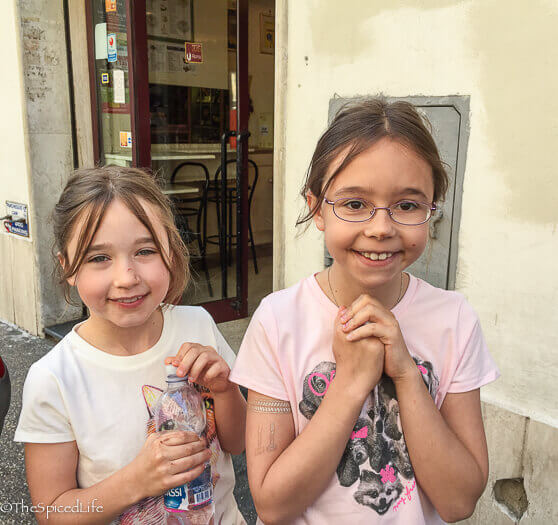 No your screen is not smudged. We started the tour at a “bar,” which is where they serve cornetti (a slightly sweet croissant like pastry), caffe (espresso, cappuccino, etc) and other dolci, such as tiramisu. Everyone was encouraged to go ahead and get cocoa powder on their faces, which is exactly what happened to both of my kids. They were pretty happy at this point–the cornetti and tiramisu were really good. As a lifelong diehard croissant enthusiast, I was especially taken with the cornetto. It is not better or worse, just different. You taste the butter more in a French croissant, whereas the Italian cornetto tastes more like its own thing, slightly sweet, buttery, crispy… divine.

I chose Eating Italy‘s Taste of Testaccio tour because it emphasized being in a non-touristed “real” Roman neighborhood, and also because it emphasized that the neighborhood, Testaccio, has a long culinary history. I had nothing to judge by that first day, but now that I have been to the Spanish Steps, Trevi Fountain and Pantheon, yes Testaccio was incredibly quiet and peaceful! And my guide Domenico, as well as people on the street, often seemed to know one another. I would not call it my home small town exactly, but it definitely had a neighborhood feel. 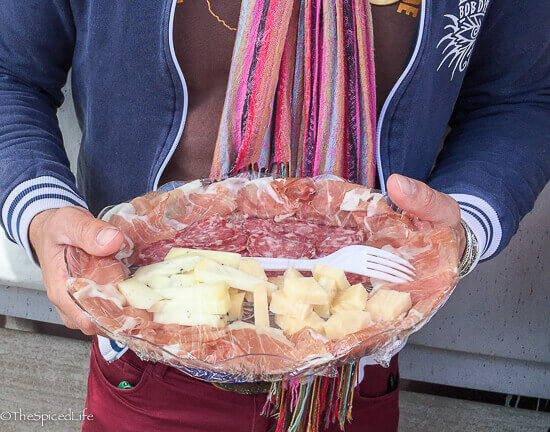 After the morning pastries, we headed to Volpetti, a small market specializing in cured meats, cheeses and other deli type items. We got to try a salame made with red wine, a prosciutto san daniele (so good!), a parmisano-reggiano, and my personal favorite, a young pecorino cheese infused with white truffle. I have not been able to get that last out of my head! Pecorino tends to be the cheese of choice in Rome, so I don’t know if I will have much of a shot of seeing anything like it in the south or not.

After that we tried pizza (Roman style) at what turns out to be the #3 (as ranked by a local newspaper) pizzeria in Rome. I believe it–and everything we have tried since is soggy and sad by comparison! The bottom was amazingly crisp–it put anything I ever had in New Haven to shame. All 4 of us went crazy for it. 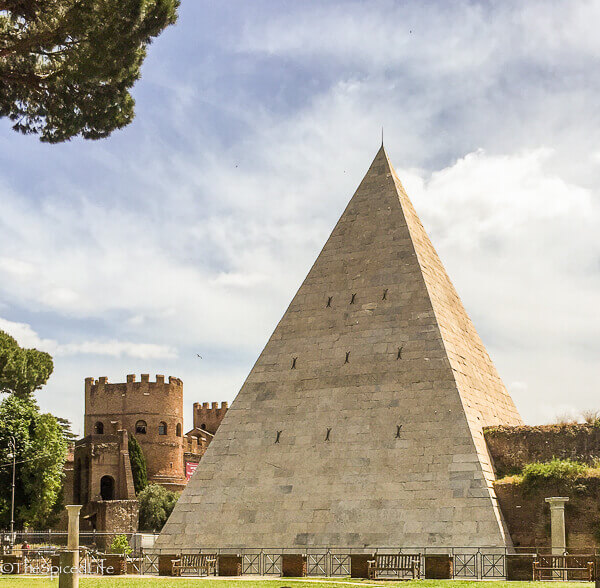 Next we took a break from the food to visit the Non-Catholic Cemetery in Rome, most famous because Percy Shelley and John Keats are buried there. However, what I was most intrigued by was this view that we had of the Pyramid of Cestius (older than the Coliseum!!! Built by some Egypt-loving Roman) and the Porta San Paolo, one of the gates into ancient Rome (just the fact that it looked like an ancient castle was enough to get me excited). Everywhere you turn in Rome there is something centuries, if not millennia, old.  Maybe it is because I am an American where 17th century graves in Boston seem ancient, but I personally find it thrilling to be somewhere so darn old. Or maybe it is because I love history. Whatever the reason, just, WOW. 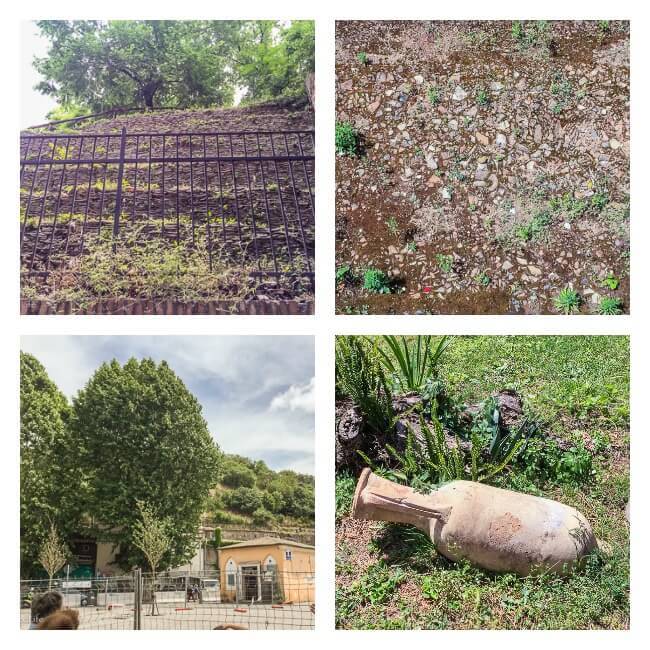 Speaking of all things old, Testaccio is so named because Monte Testaccio is there, which in turn is so named because this giant hill is actually an ancient “landfill” of testae, or amphorae fragments. Amphorae, pictured in the lower right corner of the collage, were the earthenware vessels used by the ancient Romans to transport wine, oils, and just about anything really. When they were used, they were carefully disposed of in this “landfill,” which was much higher in ancient times. You can see in the upper left corner photo that the shards were carefully layered in terraces–and you can see the shards still today. The picture in the lower left is not the greatest, but it gives you an idea of the size of the hill. The upper right picture is not actually of Monte Testaccio, but rather the ground in the middle of the Testaccio Market–where even there the ground is littered with testae.

We visited lots of stalls in the Market, which is conveniently (for the shopper) and oddly disappointingly (to the tourist) in a brand new location, so it is very modern and clean. The stalls however have been owned, in this spot or the previous one, by families stretching back generations. We tried fresh fava beans from a produce stall, bruschetta from a bread maker, and cheese from a cheese seller. We also stopped for classic Roman pasta dishes at an osteria near the Market that was built against the testae terraces, so you could see the layers through glass windows. By far my favorite, and probably my favorite visit of the day, is a newer stall called Dess Art, where a Sicilian pastry chef makes the only cannoli that I have ever liked–and I did not just like it. I adored it. That is also why there are not pictures, except for the one of Alex eating her connolo up above in the collage–I was too busy quickly purchasing what I can only describe as a shortbread sandwich cookie filled with the same ricotta filling (we only had time to purchase stuff at Volpetti–otherwise we were supposed to just stick with the group). I would go back to Testaccio solely for more of Dess Art (note: we did go back 4 weeks later! We ate more cannoli, and we also had her lemon granita–which was also the best I tasted anywhere of that, which is saying something, having spent some time by that point in Sicily and the Amalfi coast!). 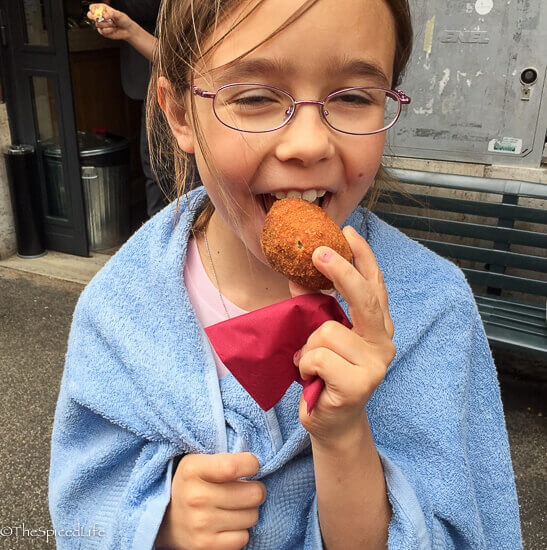 My only criticism of the tour (and I loved it overall–if I were in Rome for longer I would be taking their other tours for sure) is that after eating all that, our next stop was for Suppli alla Genovase, a fried rice ball similar to arancini, but instead filled with rice, braised beef and carrots, and either pecorino or parm, I no longer remember which. Maybe this is an American perspective, but I wish this had been much earlier in the day. Could I force down gelato, pastries, etc at this point? Heck yeah. A fried rice ball with braised beef? Nope, no matter how good. John and the kids felt the same. Alas. But it was fun to try!

We finished at a decades old gelateria, Giolitti (<–the official website seems to have broken, so I have linked you to Wikipedia, please let me know if anyone discovers a new website). This was, needless to say, delicious. Amusingly, the proprietor reserves the right to deny particular flavor combinations if s/he is certain they will not work. They also do not give out tastes of flavors, unless you happen to charm them–of course Alex did (right after he had told another gentleman with us no!). He probably felt bad for her that she could not imagine what Torrone gelato would taste like! We all adored what we got, and it was the perfect ending to what was easily the best food tour I have ever taken. 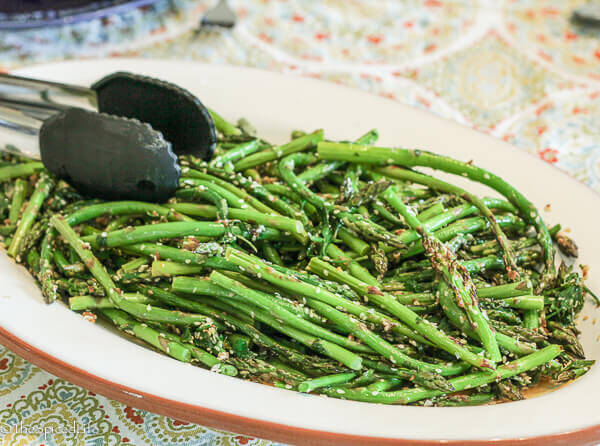 A few quick notes about this asparagus dish. I served it as part of an Italian themed meal I served to my family a few weekends before we left. This asparagus dish in particular is from Calabria, and I found it in Mary Amabile Palmer’s Cucina Di Calabria: Treasured Recipes and Family Traditions from Southern Italy

. Needless to say, I purchased it with an eye toward our vacation. The asparagus was delicious, and I highly recommend it as a quick and easy variation on your regular roasted asparagus routine. 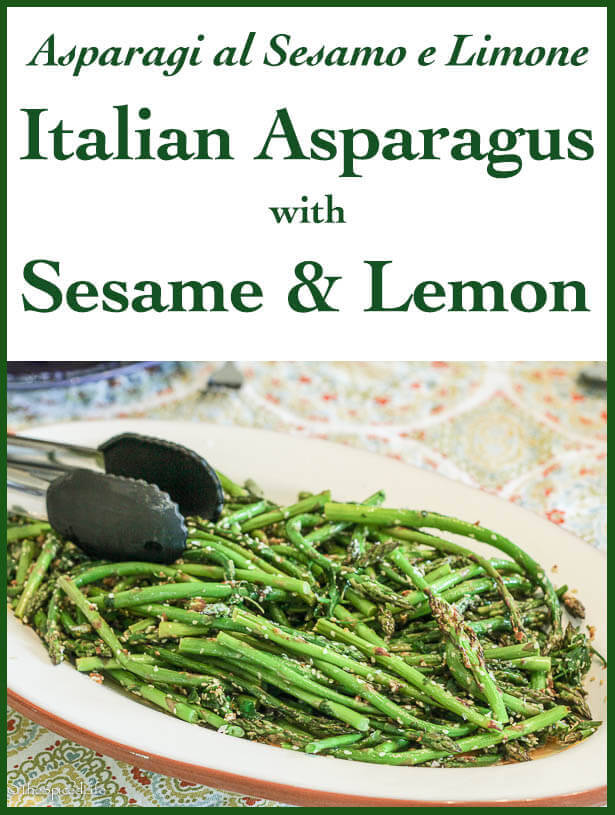 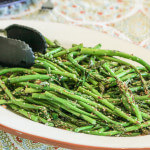