As promised, I made the South Indian Style Aloo Mattar from Tigers & Strawberries almost instantly after reading about on Barbara’s blog. It was perfect timing for me–I am due to head to the big international and all things foodie grocery store (Jungle Jim’s) in the city this week, so I am running low on a lot of things (it is a monthly trip), but I knew I had peas and potatoes–and of course I always have spices and onions. And you can convince me to eat peas and potatoes with Indian spices any time, I am always in the mood for them–which is kind of ridiculous when you consider that peas rolling into my mashed potatoes was a moment of trauma for me as a child. 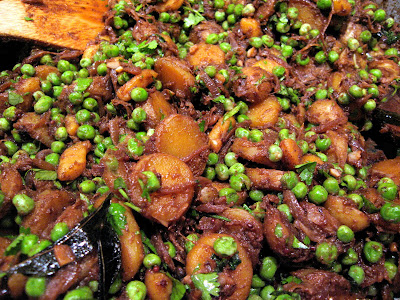 But I digress. My verdict on the dish? It was very good–but I learned 2 things. First, on a whim I chose to toast the spices in the spice paste, which increased their intensity, in which case maybe I should have reduced them. Second, I doubled the recipe which doubled those toasted spices–I should have followed my instinct when I realized it was a lot of spices! Especially because Barbara cooks the way I cook–loads of garlic, onions and spices, so clearly there was not going to be as much wriggle room as I have with some recipes, where I am desperately adding more spices at the end of cooking the dish. So this is all my way of saying that we loved the dish but it was a little too spicy (spicy spices, not spicy hot) for us. Just a tad. And I think it is user error–I should have just followed my common sense when I saw I was adding about 1/4 cup of a spice mix! 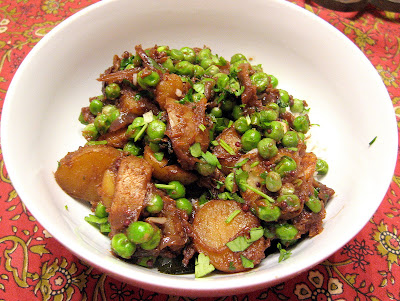 The only other change I made–by necessity–was to use a little mint and a lot of cilantro, because that was all I had in my garden. Since those were all my changes, I am sending you to Barabra’s site for the recipe. However I have returned to this post (pre-publishing) after eating some leftovers to say that my Sweet Tomato Relish was perfect with this.