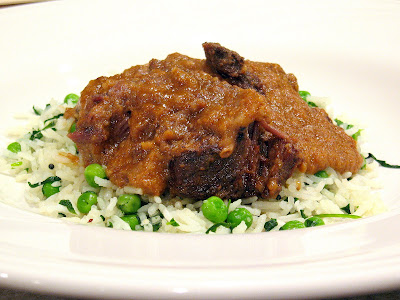 Wow I feel like we have just been eating TONS of Indian food lately–and since Mommy’s in charge, that must mean I have been craving it like mad! Chickpeas, potatoes & peas, Indian chutneys and sauce… yum! Good thing my whole family gets along on this issue! Anyway, I was craving yet another Indian dish, this time beef, and I counted back, keeping track of relatively healthy and vegetarian meals, and decided yes we could afford to braise some beef. And you all know how I feel about braising beef. Heaven on a plate in the fall/winter. 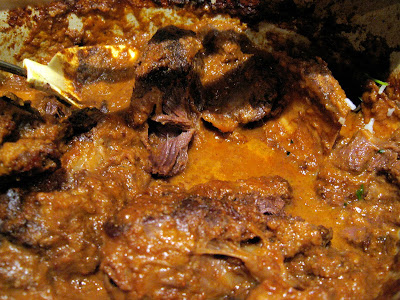 I actually found this recipe on the Cooking Light Bulletin Boards. I am the third person to make it since it was posted, so you know it wins points for ease of preparation and sounding tasty. Because I got it from the board, I am not sure how much, if at all, it was adapted to start with (it is a Madhur Jaffrey recipe) but I did indeed adapt it, the most significant change being to add garam masala at the end, which John and I both felt it needed. I also adapt all recipes using cubed chuck and turn them into braised chuck–I just don’t see the point in cutting up the beef that way, plus I like the flavor from using bone-in meat, which makes cubing even more difficult.

The verdict? It was fantastic. Rich and creamy, fragrant with the garam masala, it was perfect cold weather food. 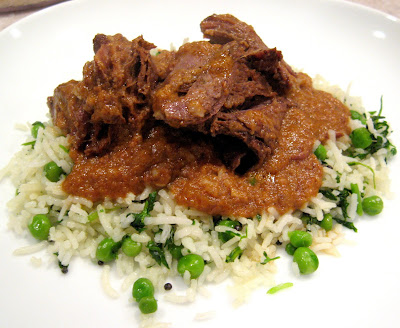 I served it with a pilaf made with peas and methi greens. I came upon the methi greens (fenugreek greens) in Jungle Jim’s and decided I should try cooking with them. I don’t often have great results with greens, so I only bought one, albeit large, bunch. I enjoyed the pilaf–it made a fun change from plain rice, but I cannot say I was blown away by it. I used much less methi greens than called for–or at least I assume since the recipe did not say how large a bunch was. The experiment was a success though in that I would be willing to try methi greens again. 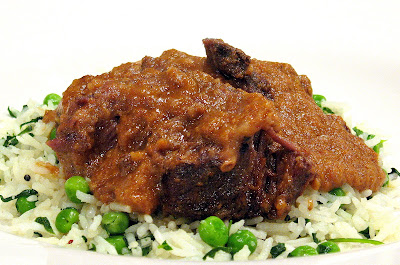 Place the onions and garlic in a food processor and process only until finely chopped/minced. Set aside.

Heat the oil in a Dutch oven over medium high heat. While it is heating, pat dry the beef and rub salt and pepper into it. When the oil is hot, brown the meat on all sides. Remove the meat and place in a bowl to catch the juices.

Dump the onion/garlic mixture into the hot pan–the juices will deglaze the pan. Make sure to stir up any browned bits sticking to the pot. Sprinkle some salt and pepper over the onions–to taste. Reduce the heat to medium and cook for 10-12 minutes, stirring occasionally, to brown the onions. Add the spices (EXCEPT the garam masala) and mix in. Then add the yogurt and mix well. Remove a ladle-full of this mixture and set aside in a bowl. Add the meat back into the pan, including any accumulated juices. Using a spatula, scrape the onion/yogurt mixture in the bowl on top of the meat. Bring it to a boil. Cover the meat with parchment paper that hangs over the sides of the pot and place a heavy lid on top of that (or foil if you have no lid). Place in the oven.

After 2 hours, turn the meat over. it should be becoming tender and the juices should simmering–if they are not, turn the heat up to 275 f (I did not need to). Replace the parchment paper and cover and return the pot to the oven. About 45 minutes before serving, check on the meat again–it should be falling off the bone by now; if not, increase the heat to 300 F (once again I did not need to). This is probably overly picky, but I removed the meat and used an immersion blender to make the sauce super smooth and creamy. I then replaced the meat, being sure to scrape all of the sauce in with it. Return the meat to the oven, increasing the temperature if need be. Before serving, add the garam masala and stir it in. Taste for salt. Serve with basmati rice. 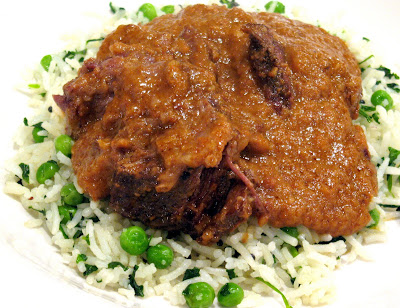