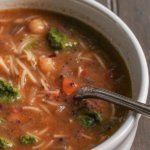 Middle Eastern Chickpea and Broken Noodle Soup is an easy weeknight meal that tastes like it spent all day simmering on your cooktop thanks to using a pressure cooker. Affiliate links were used to link to items I am discussing. 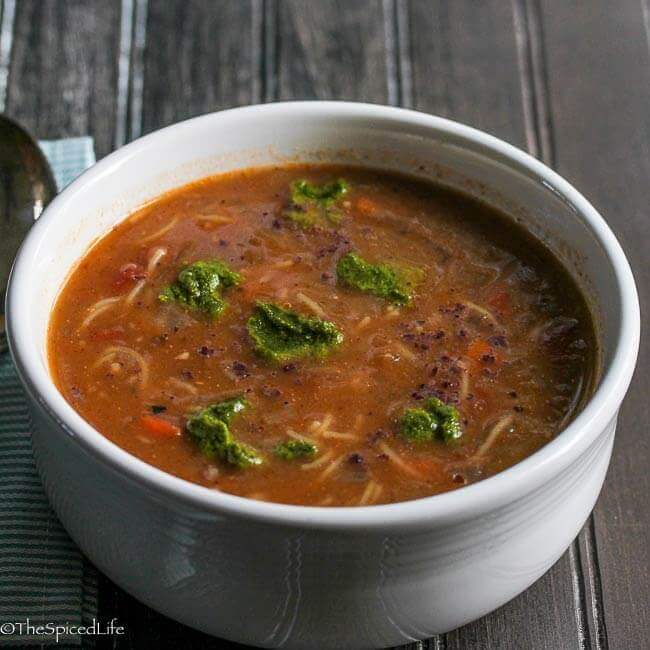 Have you guys heard the one about the girl who yakked nonstop but then lost her thyroid and suddenly it felt like her voice box was massively out of shape and anything longer than one or two sentences nearly did her in?

Yeah neither had I until this past week. Sorry for the long silence. I should have known I was being a bit optimistic about the week before the surgery and then, well, surgery. And my brain does not play coherently on opioids. Thank goodness starting Sunday they let me have my NSAIDs (Ibuprofen, Aspirin, Naproxen, etc) back. Because the throat is a compressed area where suffocation or choking is a real risk, the doctors do not like having any blood thinning medicines in your system in case of bleeding, and NSAIDs are blood thinning. I have a lot more to say about what the Opioid Crisis is doing to hospital care (relevant because without opioids and NSAIDs for treating pain you are left with Acetaminophin) but I think I need to save it for another day or I may never get this post out. 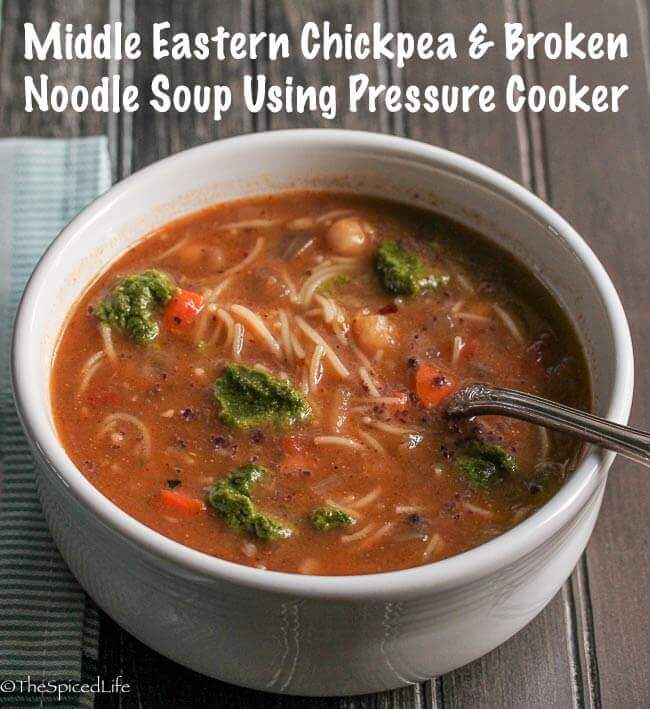 This Middle Eastern Chickpea and Broken Noodle Soup would have been perfect when I got home from the hospital (my mom’s mac and cheese was better but nothing beats mom’s cooking when we are sick, right?), as it is warming and flavorful without being spicy or harsh. When I made it, I had two goals: make something that would allow me to use my remaining Central Asian Herb Paste and make something that would allow me to play with my new Instant Pot. I will pause right here and explain that all of the ingredients in the herb paste are also ones used in Middle Eastern cooking. And creating Middle Eastern dishes is something I feel more comfortable inventing as I go, versus Central Asian cooking, which I am only beginning to learn about and would need a recipe. 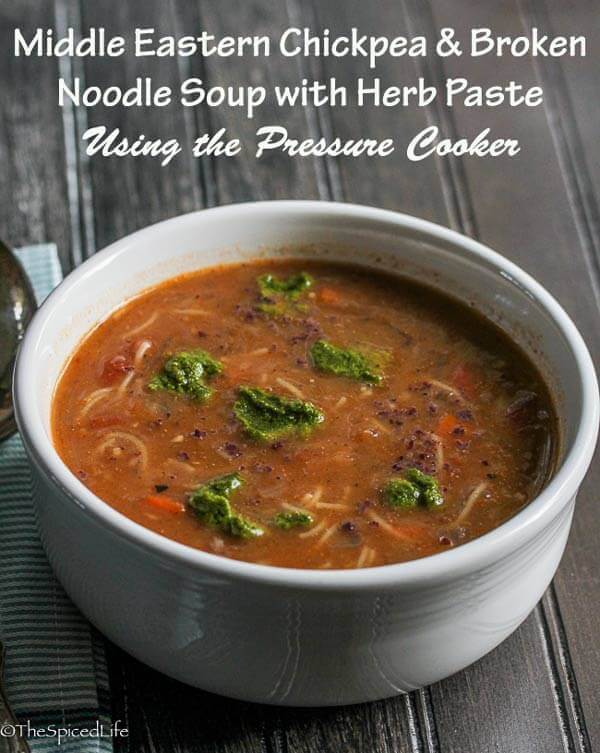 At any rate, I knew I was thinking Middle Eastern not just because the herb paste matches those flavors so well, but also because I wanted to challenge the pressure cooker with chickpeas, notorious for needing soaking before cooking, and they always make me think of Middle Eastern food. In fact this dish was inspired by my Chicken Soup with Chickpeas and Broken Vermicelli. But I wanted this more vegetarian friendly soup to focus on the chickpeas, and for that I wanted home-cooked chickpeas with the broth they cooked in. Normally this would mean simmering the chickpeas all day and soaking them the night before, but the pressure cooker takes this pressure–no pun intended–away. And by the time the chickpeas are done cooking, the rest of the soup is finished. Perfection! 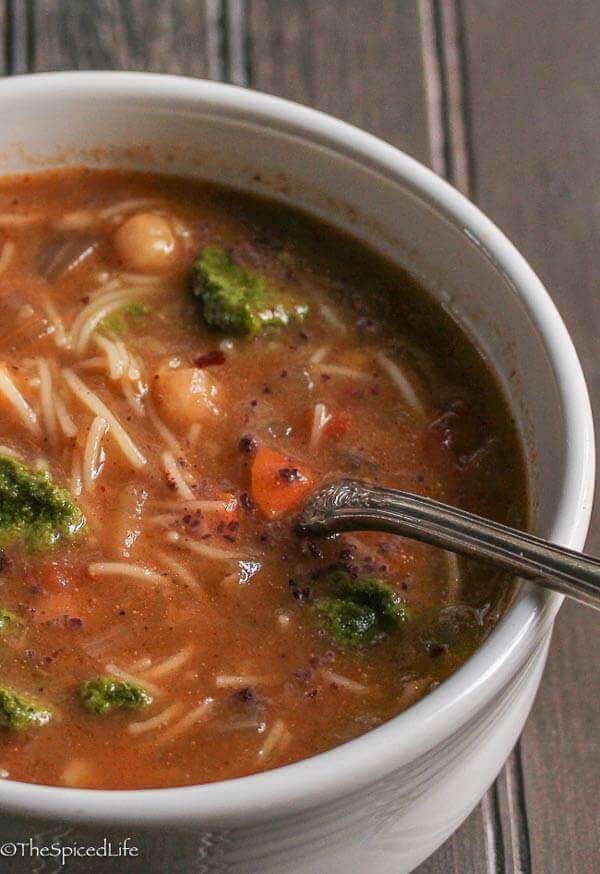 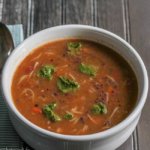 This soup saves time by using a pressure cooker to cook the chickpeas. Homemade chickpeas are tastier than canned, but more importantly, the cooking stock adds flavor and depth to the broth of the soup. For me, the beauty of the pressure cooker is being able to decide to cook the beans about an hour before serving dinner--so my beans are not soaked, but if you are even shorter on time, soak the chickpeas the night before and consult your pressure cooker manual for cooking time as it will considerably reduce it. Use vegetable stock to make vegetarian.

*This is another recipe where I had fun playing with spices from Burlap and Barrel. This post is not sponsored, I just really like their stuff! If you cannot use their spices, substitute with regular Urfa pepper and regular sumac.

Looking for a Middle Eastern Chickpea and Broken Noodle Soup collage to pin? 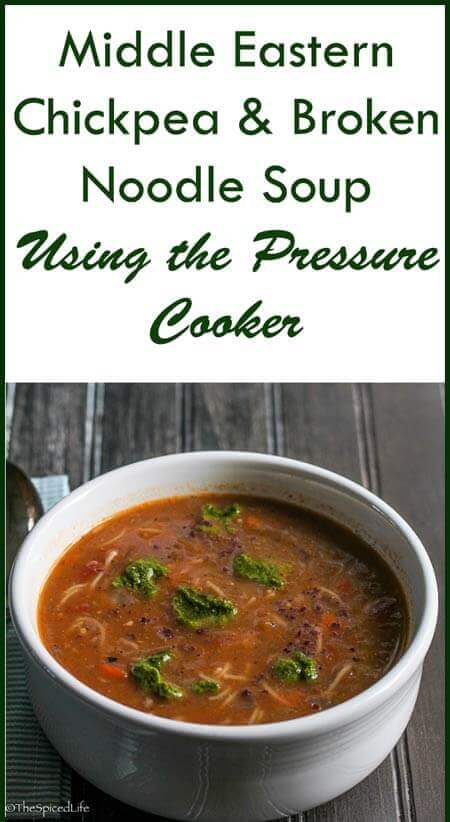