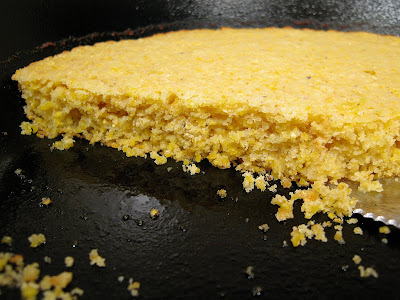 You guys might remember that a while back I picked up a vegetarian cookbook called Passionate Vegetarian by Crescent Dragonwagon. She apparently caught wind of my post, and actually emailed me about it. She was extremely complimentary about my post (truly I did a happy dance around the kitchen when I got her email) and asked if I would be interested in reviewing her newer cookbook, The Cornbread Gospels.

Let me say before I begin for those of you who might be wondering: I have not had any more recipes from Passionate Vegetarian because the honest (and embarrassing) truth is that I acquired something like 15 cookbooks in one weekend at those sales. So while I still have loads of recipes bookmarked, I just have not gotten back to them yet.

Anyway, The Cornbread Gospels arrived yesterday (make that about 16 cookbooks to divide my attention between, and yes I *am* self-banned from the used bookstore at the moment) to great excitement. I will confess I wondered how I would feel about an entire cookbook devoted to cornbread. I love cornbread and cornmeal is one of my favorite grains to work with. But an observant friend of mine at the CLBB said that he felt like there was not as much interest in the various recipes (at the CLBB) because everyone already had a favorite cornbread. I am seriously loyal to my favorite recipe, so I guess I am guilty as charged. Interestingly this seems to support Ms. Dragonwagon’s idea that cornbread occupies a special place in our society while at the same time making me wonder would I be willing to diverge from my favorite to try others?

It turns out yes I would. That might be because I love cornmeal so much I was willing to give it a go. But it might also be because I cannot put this book down and Ms. Dragonwagon has me completely and utterly convinced that I should try every recipe in the book. This is the first time ever that I stayed up too late reading a cookbook. I am in the middle of the Southwestern Cornbreads chapter and am seriously considering *not* taking the book upstairs with me tonight since I really need to get some sleep.

So expect more recipes, observations and reviews to come, but in the meantime I figured it only made sense to start with the cornbread her restaurant was famous for. It is in the Southern Cornbreads chapter, but my guess is that it is a tad sweeter than most Southern cornbreads (excepting African American ones, which I had observed myself in previous years and so was glad to have confirmed by the expert) and it uses yellow cornmeal instead of white, the southern norm. I hope Ms. Dragonwagon will forgive me for thinking of it as a “gateway cornbread” for a rich, super sweet cornbread loving northerner such as myself.

It was wonderful. We ate it plain–the buttery bottom provided by the melted butter in the skillet meant no butter was needed, and I was determined to give less sweet a chance so I did not pull out the honey. I think John was not ready to be convinced (about less sweet cornbread), although he finished his piece–which is funny because his mom’s family is from southwest Virginia and I am nearly certain she prefers the less sweet southern cornbread. But the kids and I loved it. It was a vivid reminder of why I do not make cornbread that often–I have no self control around it. 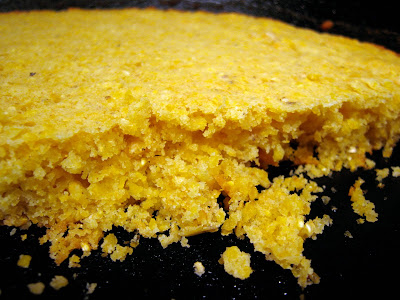 Preheat the oven to 375 F. Pour the single tablespoon of oil into the cast iron skillet and use a paper towel to wipe all of the inside of the pan (you could also use spray as she suggests but I don’t like the film it leaves on my pans).

Whisk together the flours, cornmeal, baking powder, baking soda, salt and sugar in a large bowl. Set aside.

Whisk together the buttermilk, egg and oil. Pour it over the flour mixture and fold it gently together. Do not overmix.

Heat the skillet over medium heat with the butter inside it. When the butter has melted and is just starting to sizzle, pour the batter into the pan. Shake it gently to even out the batter and place it in the oven for 20 minutes, or until golden brown. Let cool for a few minutes before slicing to serve.