You are here: Home / corn / The Power Of Garnishes: Sopa Tarasca (Tarascan Soup) 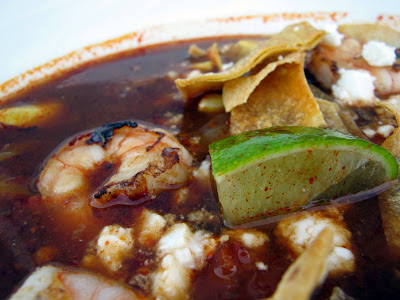 There are 6 “flavors”–well actually I think the Japanese and potentially other cultures say there are more–but there are 6 that I can discern: sour, salty, sweet, bitter, hot and umami/savory. Hot is not really a flavor to me, despite what I just said. Umami is kind of nebulous–I know that I like it but I would have trouble discerning it on its own in some cases. So for all intents and purposes, this post is about the other 4. 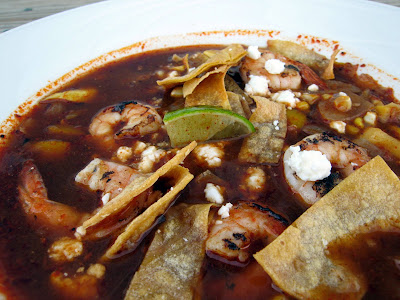 I really like those 4 primary flavors in balance. I don’t hate any one of them when present in a dish, but I have different levels of tolerance for them in extreme quantities. For example, although I have a sweet tooth, for me sweet needs to be tempered by one of the other 4, although it can still be dominant sweet. Chocolate and coffee (bitter) and lemon (sour) are 3 good examples of my favorite dessert flavors balanced by the other non-sweet flavors. Salty for me needs to be balanced by sweet or umami–sorry to bring it up when I said I wouldn’t. But I could eat a mountain of salt on a rare filet mignon but hand me an olive or some caviar and I gag. I think I have the greatest tolerance for sour and the least tolerance for bitter. 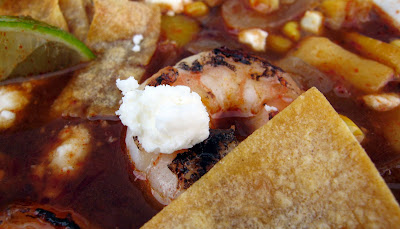 Which brings me to this soup. Bitter is a much more prominent flavor in other culture’s cuisines as compared to American (and probably European) food. Mexican, Indian and Thai dishes can be dominantly bitter and no one in those countries would wrinkle their noses. But unfortunately, despite my best efforts to be open minded to other cuisines, I do wrinkle my nose at bitter-dominated dishes. Which is what happened when I first tasted this broth. I think of myself as loving ancho chile powder; I love the flavor it brings to dishes. But ancho as the dominant flavor is actually quite bitter. However, I really wanted to stay true to the nature of this traditional soup, so I did not want to doctor the broth itself too much. 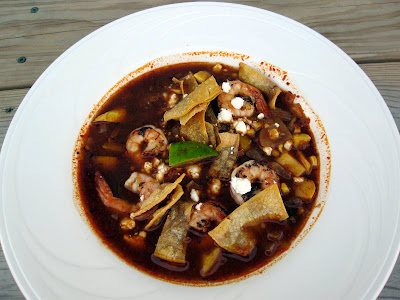 The broth reminded me a bit of the posole I made last winter, which we loved. Posole of course is all about the garnishes. I had been planning on adding some stuff to this Tarascan broth anyway to make it more of a one dish meal (Kennedy’s recipe basically calls for fried tortilla strips and fried ancho strips), so I decided to focus on flavoring the garnishes in such a way that the traditional nature of the broth would be complemented but not overwhelmed. 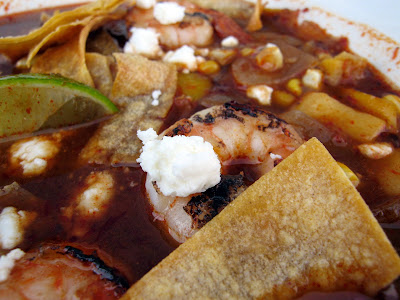 The kids each had 2 bowlfuls and John and I cleaned our plates down to the last drop, trying to reserve enough for tomorrow night’s dinner as well. The seafood was a fun addition–I needed to use up my last 2 bags of shrimp and scallops–but not really necessary. The beans and corn were plenty flavorful enough. If you make this in the winter, make sure you use a good frozen sweet corn; for example I love Stahlbush Island Farms Frozen Corn, although I used fresh local corn this time. 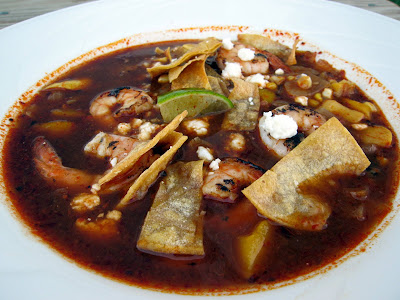 Using a blender, puree together the tomatoes, onion, garlic and soaked ancho chile peppers. Use some of the chile soaking water if necessary to move the blades. Puree until smooth. This can be done ahead. 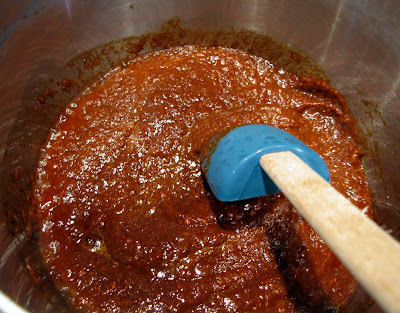 Heat the oil in a large saucepan (4 qt works fine) over high heat and add the pureed chile mixture. Stir and fry over medium-high to high heat for 8 minutes, until it thickens and darkens. After 8 minutes, add the chicken stock and stir, bringing to a boil. Then reduce the heat and simmer for 10 minutes. Taste for salt, lime juice and honey and add the oregano. Let it simmer for another 10 minutes, and up to an hour, at a slow simmer, covered. It may taste bitter to you at this point, but I recommend individual “doctoring” after the garnishes are added because you may find you do not need it.

Spoon the corn relish and beans into a bowl and ladle the broth over it. Sprinkle the remaining garnishes on top of the soup. 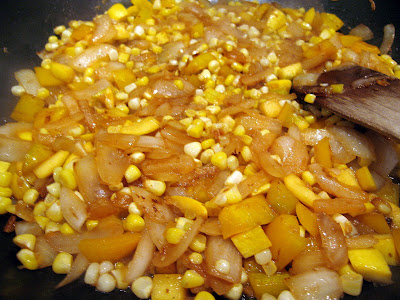 Heat the oil in a large nonstick skillet over medium-high heat. Add the garlic. Cook, stirring, until it is golden brown and fragrant, about 1 minute–watch to make sure it does not burn. Add the onion with a pinch of salt and cook for 10-15 minutes, stirring occasionally, until caramelizing. Add the sugar, pepper and zucchini with a pinch of salt and cook an additional 8 minutes, stirring occasionally. Add the corn and turn the heat up to high. Add the water to deglaze the pan and steam the corn. Cook, stirring, until the water has evaporated. Add the lime juice and cumin and stir. Taste for salt. 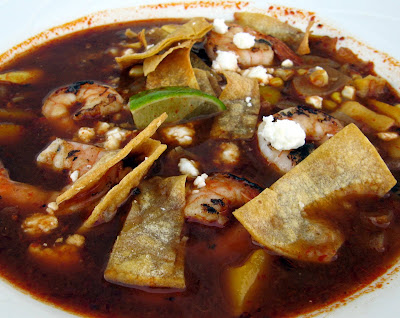