You are here: Home / beans / Copper Piping and a Layered Tortilla & Tomato Casserole With Butternut Squash Hash and Melted Cheese 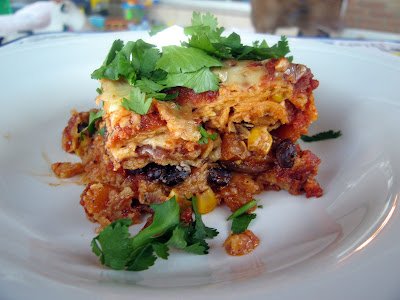 I have become pretty good friends with one of the moms from my playgroup, and after spending many playdates over at her house, I have decided maybe, just maybe, she is a good enough friend to witness the chaos I live in at this “tweener” house. She and her twins, who are Sammy’s age, are coming over tomorrow. We are going to paint Halloween cookies–I am using the King Arthur Light Spice cookies recipe I posted a bit back. It should be fun. I also wanted to make a hot lunch–she has fed me many, many times, so not only do I have lost ground to make up, but also I just don’t really love sandwiches myself all that much so the “fixin’s” are not what I have around.

Anyhoo, I decided to kill 2 birds with 1 stone and make a tortilla casserole for dinner tonight which we will have again for lunch tomorrow. But the playdate tomorrow is relevant because I made a few changes to ensure that the casserole did not come out too spicy. Actually I killed 3 birds with this 1 stone, because the kids and I ate the filling on its own for lunch today, kind of a butternut squash hash of sorts. It was wonderful–if the casserole flops, I will at least have created a great hash.

Before I get to the recipe, I have some house photos to share. I will warn you these are really only for the truly interested, because most of the photos at this point showcase things like copper piping being put down. Although we do have mounds and mounds of dirt. Apparently the septic tank is nearly done (and was halfway done when we took these photos). 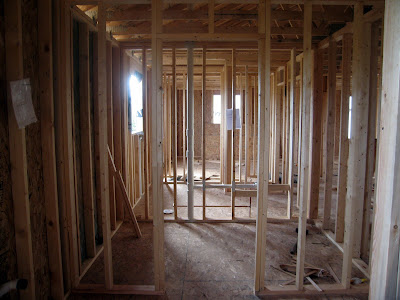 This is a shot upstairs, starting in the master bathroom, staring down through the walk-in closet and the kids bathroom. At the end is one kid’s room. All that piping you see is for the bathrooms. 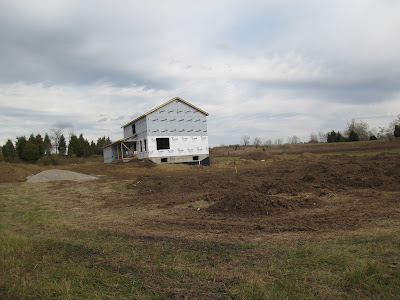 Dirt, dirt and more dirt. Basically the septic system is in there somewhere. 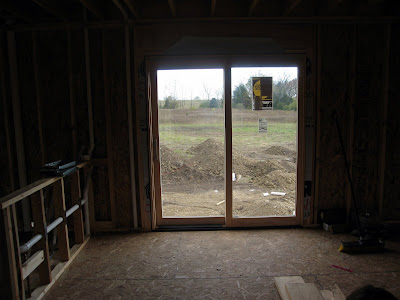 Wow our door is in! 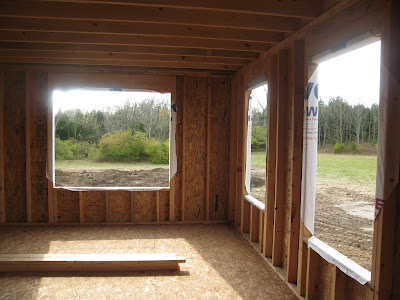 I don’t know if it will always seem this way, but at the moment this room is just decadent with sunlight. I am so glad we added the extra windows! 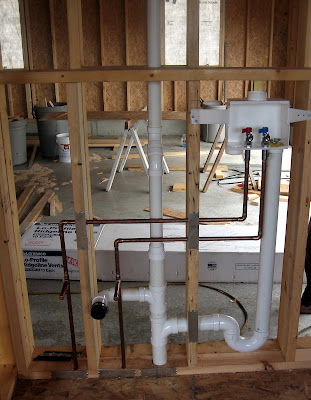 The hook-up for our washer and dryer! Dad, this picture is for you because probably only you are interested in that level of detail. 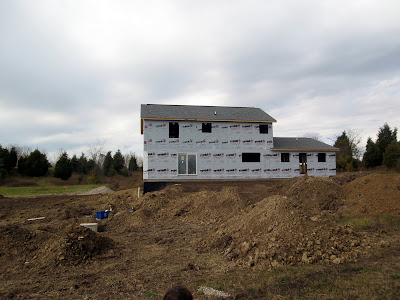 OK, so I already shared a dirt photo–but I like this one because it looks like the backyard has waves of dirt. 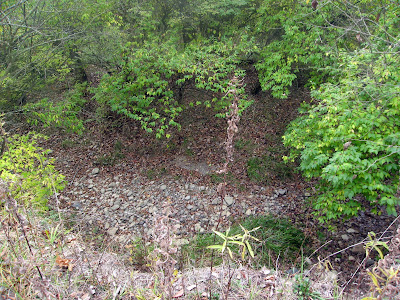 The creek bed on the property is dry–symbolic of the beautiful weather we have had that has cooperated completely with the builders.

Back to food… I have developed this terrible habit–brought on by too much tv I am sure–of reading 30% of the next 50 pages or so when I put a book down. I know right now you are staring at the screen in confusion–basically I think I am addicted to previews. It is my version of “Next Week, on ____”–only instead I read skipping every few pages about 50 pages out. It’s terrible I know. I always regret it but cannot seem to stop myself; it is the only way that I make myself put the darn book down.

Anyway, recently I went too far and discovered too much and as a result had a hard time picking the book back up. So instead I have been reading Rick Bayless cookbooks before bed at night. I think it is because as much as I enjoyed that Curried Citrus Lentil Soup, I continue to obsess on Sopa de Lima and similar flavors–but I still want to make new recipes, not repeats. 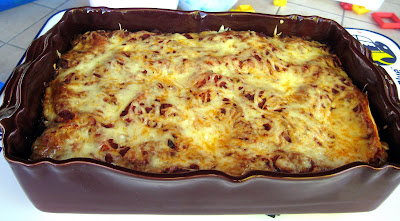 So that is where I got hooked on trying yet another tortilla casserole (reading Rick Bayless, not obsessing on sopa de lima). I realize I have made a few of them, but I think they are fertile ground for endless variation and experimentation. This one is pretty different from those I have tried before. For one thing, it uses a more authentic Mexican method of quick-frying the tortillas before layering them, which prevents them from becoming mushy and melding into the other ingredients (it worked but I don’t know if it is worth the work to me or not). I also used a more traditional Mexican tomato sauce, although I did sub in roasted poblanos for chipotles for the young tongues among us. Bayless emphasized that of all his recipes for tortilla casserole, this is the one open to whim and whimsy and wherever it leads you (my odd phrasing, not his), and so I added a butternut squash hash filling. That filling completely made the dish, in my opinion. Serve it sprinkled with chipotle powder, chopped cilantro and a dollop of sour cream. 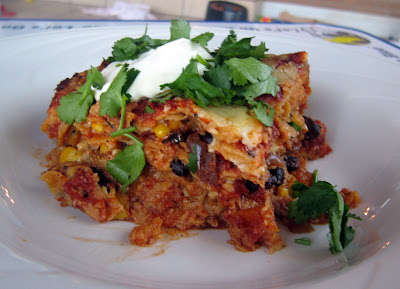 For the sauce:
6 poblanos, roasted until charred and then stems and seeds removed
1 head of garlic, roasted
3 28 oz cans of tomatoes in juice, a good brand like Muir Glen (I was out of their roasted tomatoes but they would shine here)
1/2 t smoked Spanish paprika
2 T vegetable oil
salt, if needed

For the sauce: using a blender, puree the tomatoes with the roasted poblanos (including the skins) and roasted and peeled garlic. Add some chipotles to taste if you like the heat, otherwise add some smoked Spanish paprika. When smooth-ish (I blended on low and in batches) set aside. Heat a large skillet on medium high and add the 2 tablespoons vegetable oil when hot. When it shimmers, carefully pour the tomato puree into the pan. Stir nearly constantly for 8-10 minutes, until it thickens. Taste and season with salt–with canned tomatoes it may need none. Set aside.

For the hash: Heat a large skillet on medium high heat. When it is hot, add the 1 tablespoon vegetable oil. When it shimmers, add the red onion and sprinkle with salt. Stir occasionally, turning down the heat if necessary to prevent scorching. Let cook for 10 minutes. Then add the butternut squash. Cook on medium heat for 5-10 minutes, stirring occasionally. Then cover the skillet and reduce the heat to medium low and let cook another 5-10 minutes. It is ready when the butternut squash is tender. Then add the corn and beans with the ancho and cumin and mix together. Splash with the red wine vinegar to deglaze and brighten the flavors. The hash is done when the vinegar completely evaporates. Season to taste with salt and pepper and set aside.

For the tortillas: Heat the 1/2 cup oil in a large pot or skillet, preferably heavy. It is ready when a wooden spoon sizzles when dipped into it. Fry each tortilla for about 5 seconds per side and then let drain in a single layer on layered paper towels (I pressed on top of the tortillas with additional paper towels). Set aside.

Preheat the oven to 350 F. Cover the casserole with foil and cook for 25 minutes. Then remove the foil and cook an additional 10-15 minutes, until it is bubbling and the cheese is browning. 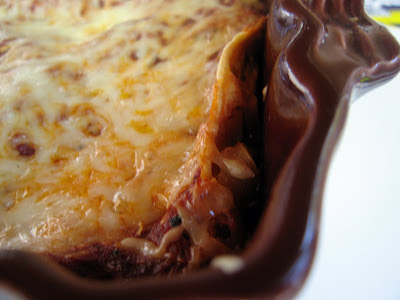