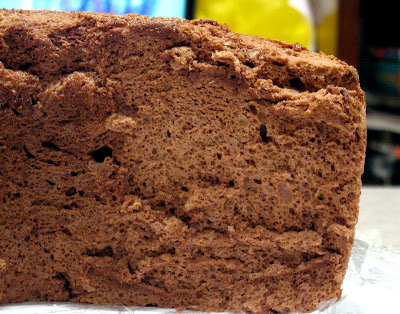 Whew! I’m so full I can barely move and of course after a week of making merry—and eating well–I am once again behind on sharing recipes.

I wanted to get this one out fast, because I personally think this would make a fabulous end to a New Year’s Eve meal. It is decadent yet light–which is a nice combination after a potentially heavy and/or rich holiday meal. I chose to offer up a vanilla choice (Vanilla Bean Chiffon Cake, recipe to come later), and this Chocolate Angel Food Cake, both served with the option of whipped cream. Our meal was not super heavy, but it was rich–roasted beef tenderloin with a wild mushroom ragout was the main course. I thought after the beef and a month of eating super rich candies and cookies, a lighter yet special dessert would be appreciated. I had never tackled a cake that was baked in a non-nonstick tube pan before, i.e., chiffon cakes and angel food cakes. So for me it was outside the box and therefore worthy of Christmas dinner (I don’t like making desserts I’ve made before for special occasions–just a small hang-up of mine). 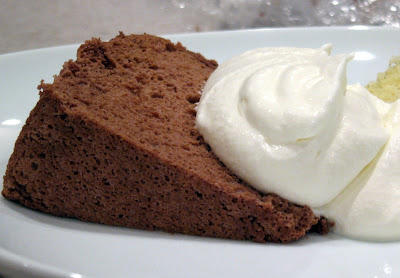 I thought I had settled on a chocolate angel food cake recipe, but then I was at a party where the hostess had baked Rose Levy Beranbaum’s chocolate angel food cake. I was completely and totally hooked. It was perfect. It is moist and really chocolatey–and yet, like I said, light, ethereal. For once, no one said “Oh this is so rich I cannot finish it”–instead their plates had nary a crumb. 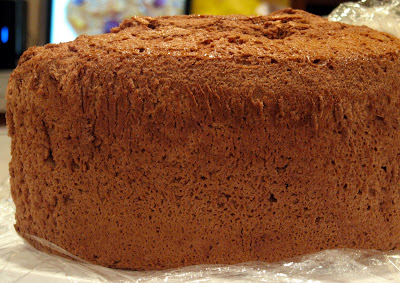 I took the pictures the next day, which is why there are no pictures of an intact cake. Also, one note on the ingredients: as many of you know, Beranbaum is incredibly precise with measurements–so on a whim I measured my egg whites (I have never bothered measuring eggs). Lo and behold, 14 eggs whites were exactly enough in volume and in ounces and only 2 grams too much in metric–and I thought my eggs were on the small side. The moral is that if you have a scale or even just a measuring cup, I do recommend measuring your eggs whites! 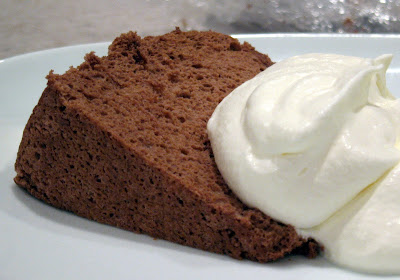 In a medium sized bowl, pour the boiling water over the cocoa powder and whisk it smooth. Whisk in the vanilla. Set aside.

In another medium bowl, whisk together 3/4 cup of sugar, the flour and the salt. Set aside.

In a large bowl, beat the egg whites until they are frothy–make sure your bowl and beater/whisk are completely clean. Add the cream of tartar and then continue beating until the egg whites hold soft peaks. Gradually beat in the remaining 1 cup of sugar–I ran my mixer on a medium speed while slowing pouring in the sugar–beat until the egg whites hold very stiff peaks when the whisk is lifted slowly out of the bowl. Remove one heaping cup of egg whites and dump it on top of the cocoa mixture–set aside.

Sift the flour mixture over the egg whites, 1/4 cup at a time, and fold the flour into the egg whites gently. Beranbaum suggested several implements for this task, including a slotted spoon and balloon whisk, but honestly, despite her advice, I still preferred my silicone spatula. She does note it is not necessary to incorporate every single last speck of flour–which I forgot and did.

Whisk together the cocoa/egg white mix until incorporated and then dump this mixture into the egg white/flour mix. Fold together, gently, until the mixture is uniform. Pour this into a 10 inch tube pan with removable bottom and run a small spatula or knife quickly through the batter to eliminate air bubbles (not foolproof, I still got some, but it will help). Bake for 40 minutes, or until the cake springs back when pressed and a cake tester comes out mostly clean.

Loosen the sides with a thin knife and remove the sides. Use the knife to also loosen the cake from the bottom. Invert the cake off of the pan and then re-invert it back to that it is resting top side up on a cake plate (I found this tricky, but ultimately it worked out fine). If not serving immediately, wrap it in plastic wrap and then store in a cake keeper.