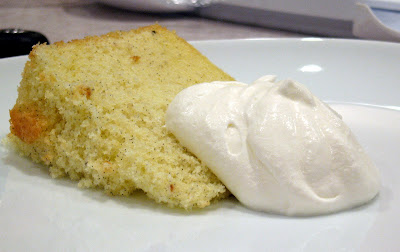 As stated, I made a vanilla option cake to go with my Chocolate Angel Food Cake on Christmas Day. I was originally planning, for a more parallel presentation if nothing else, to serve a vanilla (traditional) angel food cake. but then 2 things happened. First I found such a recipe to be more difficult to come by than I had anticipated. I have no doubt I could have found one online, but I was trying to use my tried and trusted cookbooks. Then, a good friend of mine sent me a Christmas care package full of wonderful foodie goodies, including the book Cake Keeper Cakes, by Lauren Chattman. In addition to tons of other recipes I instantly bookmarked, she had a recipe for a Vanilla Bean Chiffon Cake which seemed like it would work as well as an angel food cake for my purposes. 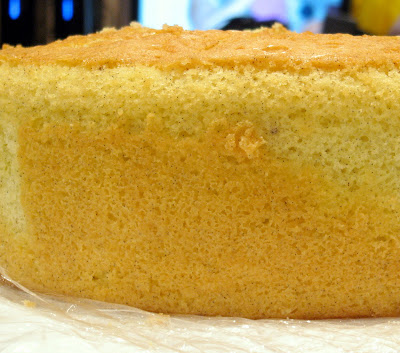 This cake was very sweet. So sweet, that while I completely recommend this cake, I do so only if you plan to serve it with something. In my case that something was whipped cream, lightly sweetened, which transformed the cake into a sublime experience. In the summer, fresh berries would be wonderful as well. You get the idea.

Just like with the Chocolate Angel Food Cake, all of these pictures were taken the day after serving it–hence no pictures of the intact cake. 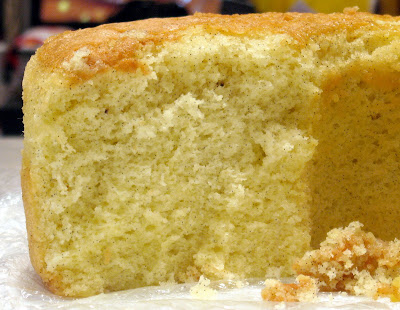 Preheat the oven to 325 F. Set aside an angel food cake pan with removable bottom–Chattman calls for a 9 inch tube pan but my 10 inch one worked fine.

First sift and then whisk together the flour, baking powder, and salt. Set aside. Scrape the seeds out of the vanilla beans and set aside.

Place the 5 egg yolks and 2 whole eggs in the bottom of a large mixer bowl. Beat on medium high speed until lightened in color, about 3 minutes. While the mixer is still running, add 1 cup of sugar in a slow, steady stream. Te mixture will lighten further and increase in volume, which will take about 5 more minutes. With the mixer still running, add the oil in a steady, slow stream and beat one more minute.

Remove the cake from the oven. Invert the cake over a wine bottle to allow air to circulate completely under it. Let the cake cool completely in the pan, about 2 hours. To remove, slide a knife around the edges, being careful to leave as much of the crust intact as possible (easier said than done sometimes–I succeeded partially). Remove the sides. Then use the knife to also loosen the cake from the bottom of the pan. Working quickly and carefully, invert the cake off of the bottom and then invert it again onto a serving platter. Serve with whipped cream.