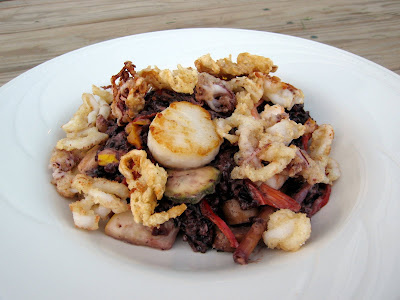 When I was on my honeymoon in Thailand there were two meals/dishes I had trouble with. The first was breakfast, because I have never cared for savory food first thing in the morning. I eventually solved this by ordering Thai crepes with pineapple. The second quandary for me was, believe it or not, dessert. Yes I have a sweet tooth but I am very picky about my desserts not being too sweet–and I have found that most Asian desserts are too sweet for me. Plus I like another flavor with my sweet–either salty, sour or bitter. Most of the Thai desserts we had were served in coconut milk and were quite sweet and only sweet. Then I attended the cooking class in Chiang Mai–while there we made a sticky black rice pudding with coconut milk, and we individually sweetened and salted it to our own tastes. Eureka! After that I would surreptitiously add some salt to my dessert and enjoyed them all.

Upon returning to the States, my favorite dessert to make when serving Thai food was that sticky black rice–with sugar and salt set out for each person. Since returning I have read that while sticky black rice is used exclusively for desserts in most SE Asian countries, some contemporary chefs have been experimenting with it in savory dishes. I came across one in Memories of Philippine Kitchens that called for a lot of the produce currently being sold at my farmers’ market, so I decided to take a stab at it. 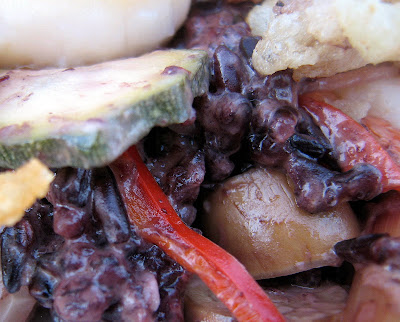 I won’t lie to you: it tasted a little odd to me. I apparently have developed a strong association of the black rice with desserts, and even though the dish technically had much less coconut milk in it than a curry, it somehow tasted richer to me, I believe because of this association. I almost wished I had used light coconut milk–and I never feel that way. So take it with that grain of salt. 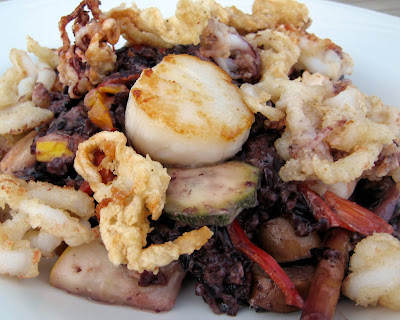 I also wish I had made it with more shrimp and scallops–or waited until I could get crab also. The squid was horribly wet, my first real disaster trying frozen seafood, and it needed to be dusted with flour–only it was so wet it became clumped in gluey flour and basically turned into calamari. Tasty, granted, but I had not been planing to make calamari and it did not really match the dish (although Alex was in heaven). My first seafood substitution mistake. 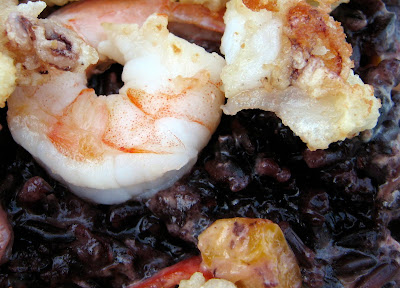 Having said all of that, the flavors of the dish were good and unique–kind of like Thai cuisine but not quite. And the dish was striking in its purpleyness. As far as the seafood goes, I am going to give you the recipe using only shrimp and scallops, but know that you could use other shellfish as well (the recipe calls for clams and crabs as well–some of which could be cooked in the casserole with the rice, but to me scallops in particular call for separate searing). 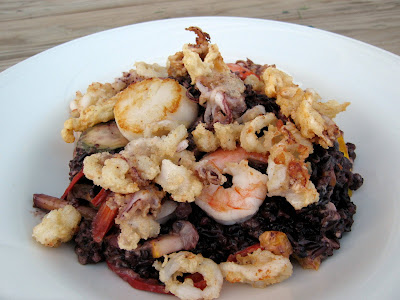 First prepare the rice: rinse the rice in a sieve. Heat a 4 qt pot over medium heat. Add 2-3 tablespoons of the oil and heat. When it is hot, add the onion and cook until soft, about 5 minutes. Add the rice and stir, cooking for about 1 minute. Add the water, stock and vanilla with the lemongrass pieces. Bring to a boil. Cover and reduce to a simmer for 35 minutes. fter 35 minutes, taste to see if done–when it is cooked to desired chewiness, drain the rice in the sive and replace in the pot. Cover with a lid and keep warm until ready to use. 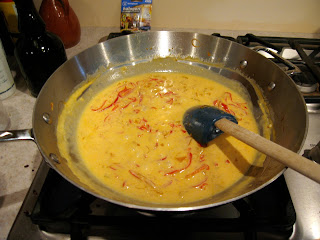 Heat a deep skillet or wok over medium heat. Add 2-3 tablespoons of oil and heat through. Add the shallots, garlic and chile pepper. Cook for 5 minutes, stirring occasionally. Add the ginger and bell pepper and cook for another 5 minutes, stirring. Add the coconut milk, 1/2 tablespoon fish sauce and 1/2 of the juice of 1 lime. Taste for more lime juice, fish sauce, and some honey to sweeten. Let t simmer for 5 minutes to let the flavors meld. Taste once more for the 3 seasonings–sweet, salty and sour. 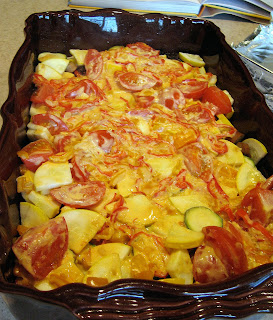 Grease a deep casserole dish. Layer the rice in it (remove the lemongrass if you do not want to pick it out later). Over that layer the tomatoes, eggplant, zucchini and longbeans. Pour the coconut sauce over that. Cover the casserole tightly with foil and place in the preheated oven. While the casserole is baking, prepare the seafood.

Sear the seafood in batches in a nonstick pan with oil and/or butter. After the casserole has baked for 15 minutes, turn the oven heat off. When you are close to finishing the seafood, remove the casserole from the oven (do not let it stay in the oven for longer than 25 minutes), but leave it covered until you are done. Serve the seafood on top of the rice and vegetables.

« Simply Stupendous Snickerdoodles
To Try Tuesday (on Wednesday this time) »