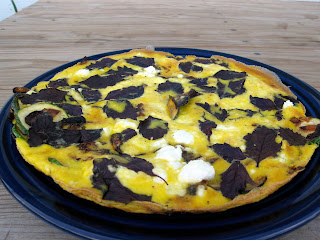 I would say I have had one of those weeks, except I would have to say 2 weeks. I think maybe it is motherhood. I am not by nature an immensely busy person–I like to stay in for the weekend, watching movies and drinking hot chocolate or watching movies and puttering in the garden. I am a homebody. But ever since Alex turned 4 I am just ridiculously busy.

Anyway, John was gone this past week, and while my mom was here to help, somehow or another I ended up not cooking. And she left Friday morning, so I had a playdate and then spent the remainder of the day just kind of putzing–until I suddenly realized it was 5 pm and I had not even considered dinner. 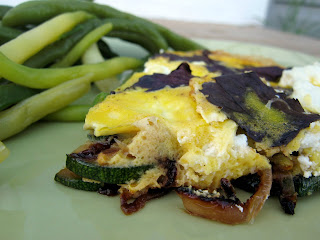 And this is why I love summer, because I could grab some zucchini (who doesn’t have zucchini right now?), purple basil from my garden, goat cheese, onions and eggs that I just have around anyway, and make a frittata to serve with blanched green beans from my mother’s garden on the side. Voilá!

Some of you may think this looks familiar–good call. Last summer, in similar straits, I made something similar, proving the basic idea is endlessly flexible. 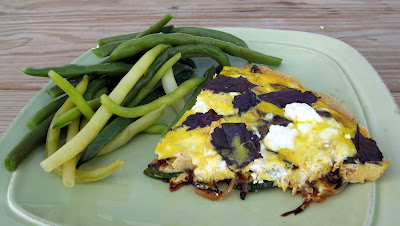 Heat a medium (10 inch) nonstick skillet over medium heat. When it is hot add the oil and butter. Then add the onions with a pinch of salt and cook until caramelized, stirring as needed to prevent scorching. This will take 10-25 minutes depending on how hot you want it (the less heat, the less babysitting but the longer it will take). Turn the heat up to medium high and add the zucchini with a pinch of salt. Stir fry until the zucchini is crisp tender and turning golden in spots.

Spread the onion/zucchini mixture out evenly across the pan. Turn the broiler on. Pour the whisked eggs over the zucchini/onion mixture. Crumble the goat cheese evenly over this and then sprinkle the basil leaves over that. Turn the heat down and cook until it is setting around the edges but still uncooked in the middle. Place it under the broiler and cook until the middle is set (watch carefully). Slide out of the pan, slice and serve with some greens green beans.