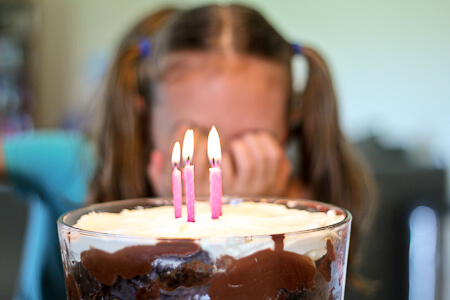 I know, I know.  This might be the longest gap I have ever gone without posting.  And we have not even left yet for Morocco!  The first excuse is that some seriously frustrating , er, stuff, is going on with our internet connection.  So every time I sit down to work on my blog, I end up fighting with the internet.  Next excuse is Alex’s birthday celebrations.  Yes plural, celebrations.  What can I say we just love our birthdays around here.  And last is my trip to Baltimore to see U2 last week. 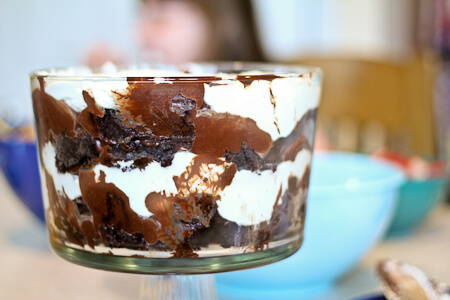 But first a word about the Birthday Trifle.  I am not sharing a recipe, but I am sharing a story.  Alex requested a chocolate cake for one of those celebrations, so I found a cake recipe that has an option for being glazed with a chocolate ganache.  The ganache, which had hot pepper jelly in it, was fantastic, and so was the cake, which really did not need anything on top to make it tasty.  However, and I am not sure went wrong so I am not going to out the recipe author in case it was my fault, the ganache was waaaay too heavy for the cake.  The bottom layer completely cracked in half and collapsed.  Alas.  So I did what every good cake baker does with such a mess and I turned it into a trifle.  Layered with whipped cream, it was ungodly rich and really delicious.

But let’s get to what’s important.

I originally had tickets to see U2 in Chicago last summer, but then Bono’s back surgery happened and all the American 360˚ Tour dates got moved to this summer.  But then I had the opportunity to go to Morocco.  After much hemming and hawing and more angst than such a decision should require, I gave up on seeing U2 in Chicago–and quickly arranged a trip to Baltimore instead. 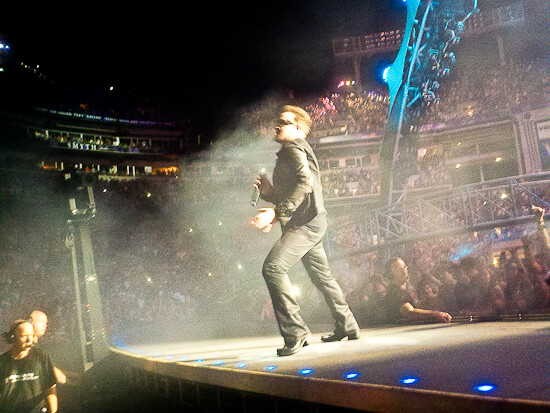 Laughing at ourselves the entire while, my friend Allison and I got out of bed at 6:30 and made it to the General Admission ticket line by a little after 8.  For the record I was 152nd in line.  (And also for the record, Alex told me that now that she knew the secret to getting my butt out of bed she and Sammy would be staging a concert every morning.).  It was hot, humid, breezy (thank goodness) and more hot.  I am way too old for this but I don’t regret a second of it. 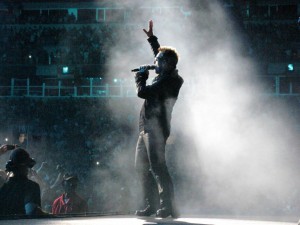 It was an awesome show.  Our seats were not quite as good as the second show in Chicago, but they were still fantastic.  All of the photos on this post were either taken by me on my cell phone (the uncredited ones) or by the ladies standing next to us (who had a much better camera I might add, and it shows!).  Bono’s voice was better than I have heard it in years.  Because it has been so long since No Line On The Horizon was released, the show seems to be more of a greatest hits show.  They actually opened with 4 straight from Achtung Baby!, which, while I love the new album, I won’t lie it gave me a serious thrill.  Shades of my college years! 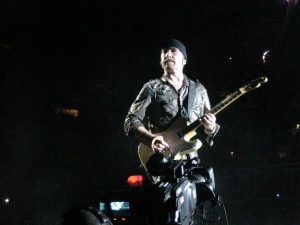 All in all, a fabulous night–and a pretty good reason to drop off the planet, if I do say so myself. 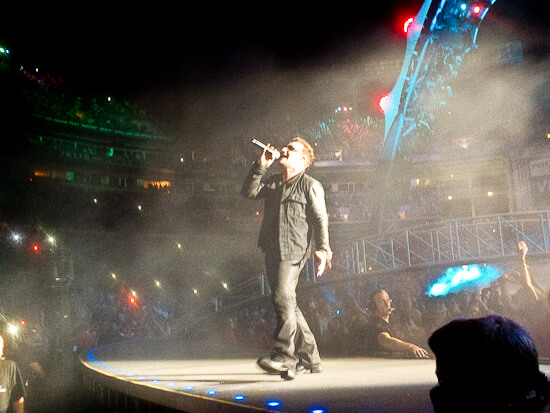