You are here: Home / misc / We Take A Break From Our Regularly Scheduled Programming To Present…. U2! 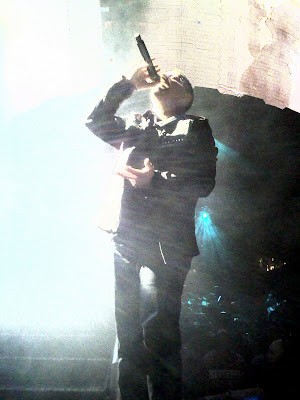 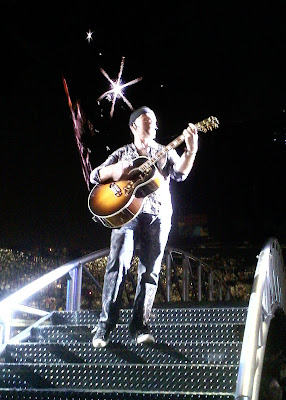 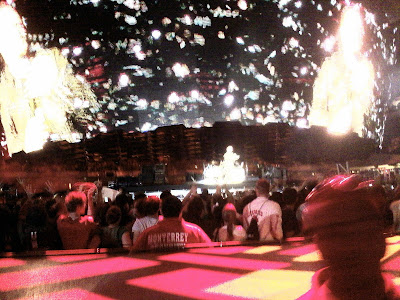 OK so some of you may not care about this–some of you have even left me comments indicating you did not care. But others of you want to see the pics and let’s face it, I want to put them up! 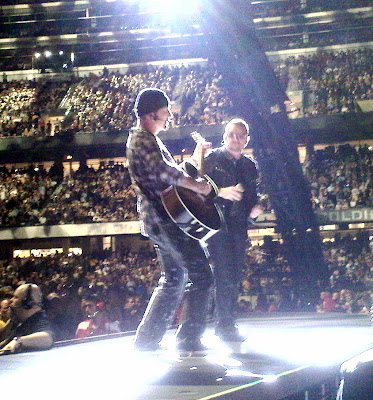 I love it when Bono sings at the Edge. This picture is cropped a bit–it was down a little way to the right of where we were. Hooray for all 3 and half million pixels in my cell phone camera!

I decided to go see U2 at kind of the last minute–after the GA (general admission–what I could afford and where I wanted to be anyway) for both Chicago shows had sold out. I think ever since having kids I had decided I was too grown up for screaming myself silly at a rock concert. 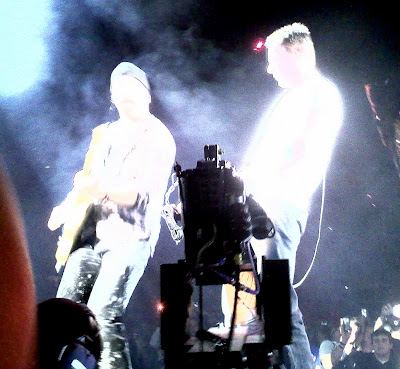 I had trouble getting a good shot of Larry (the drummer). He only came around during the amazing, fantastic remix of I Know I’ll Go Crazy and the one point at which I thought I had an ok shot the camera man came in front of me–clearly he thought it was a good angle too. 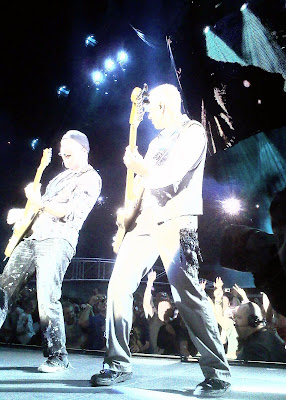 I had similar issues with Adam the bassist)–he came by more than once, but usually walking quickly and I had promised myself I was not going to be so crazed with taking pictures that I did not enjoy the show, you know? However, the first time he came by, he grinned at us! In person that man’s smile is contagious. 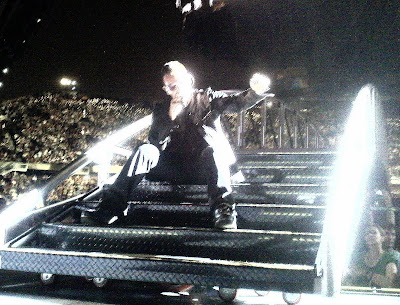 One of the times the bridge was in front of us–I could have died when Bono decided to sit down and sing rather than keep walking.

So I found the GA tickets by various means–one of them only 4 days beforehand!– and headed to Chicago for 3 nights with my sister and some friends. The first night I wanted to watch the Michigan-Notre Dame game first, so we did not try to get to that concert early (plus we did not want to be too exhausted for the 2nd concert). Our plans were further messed up by the fact that our lodgings were in college sports bar central, where all the Notre Dame grads were watching the game. So not only were we competing big time for a taxi, we were competing with 100s of very angry (hehe) Notre Dame fans. I’m afraid I was mostly beaming at the world, having just beaten a hated rival at the last minute–I think Josie was worried I’d get beaten up or something. Hey at least I was not singing The Victors at them (the Michigan fight song). 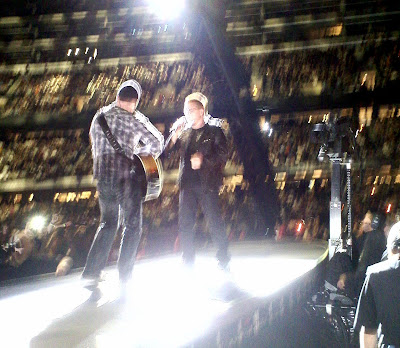 Another cropped shot of Bono singing at the Edge to my right. Now that I think on it, and look at the Edge’s guitar, I am certain this was Stay (Faraway, So Close). All of these shots with the Edge and that guitar are from that song.
So we did miss the opening act (Snow Patrol) the first night and we stood further back. (Sidenote: we saw Snow Patrol the second night and they played an awesome show. It is not often I notice the opening band, I recommend checking them out.) Although I decided that next time I would prefer to either get there early or pay for a mid level seat, it was still an awesome show. They played Bad and those who know me well know that I went crazy at that. 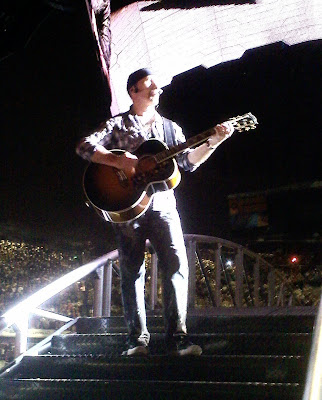 The Edge, at the beginning of Stay (Faraway, So Close), before he made his way to Bono to my right.

The second day we got there at 7:15 am. We waited all day in the sun–we covered ourselves in newspapers it was so blindingly hot. Kudos to Soldier Field for having amazing, clean bathroom facilities, being cleaned all day as we used them, in the parking garage alongside the line–I had heard horror stories from other U2 fans about port-a-potties at European venues. At 5 pm or so they let us in, and once again kudos to Soldier Field for maintaining calm. I have a hip injury from delivering Alex and there is no way I could have sprinted. As it was, Josie got there first and saved us spots along the rail. 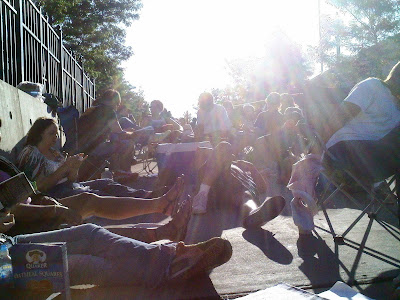 The line stretching out behind us. Check out that evil, evil sun. Waiting in line was quite the experience. Granted, general admission was unheard of in my youth, but how did I never do this at 18 but end up doing it in my 30s? 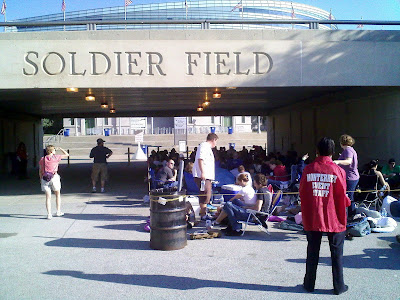 The line in front of us–those lucky people, who got there between 5-6 AM, were in the shade. We decided we needed 4 hours of sleep however, so we got there at 7 and paid the price in heat. 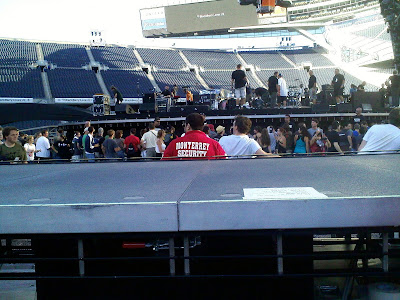 Waiting for the show to start along the rail. 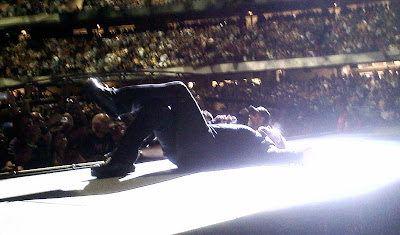 In later years, I have noticed Bono tends to get very excited and then eventually collapse, and finish the song (or talking) from a prone position. How lucky am I that he collapsed very close to me? 🙂 Josie kept whispering at me that he was getting old and in need of medical attention, haha. Don’t believe it for a second.

Rail versus pit was a big decision for us. Ultimately we decided that because U2 has put on a fabulous stage show, the rail was a better place to be because the catwalk (which the rail was about 3 feet in front of) was a normal height, i.e., shorter than me, whereas the primary stage was 9 feet tall AND you could not see the stage show (i.e., the screen and The Claw for those familiar with the show). When I realized I was standing directly opposite Bono’s cheat sheet for serenading Chicago I knew we had chosen well. 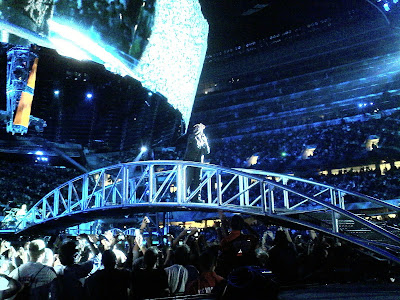 This is a great example of how absolutely gorgeous the entire set up was. Those bridges moved, landing the band members in front of different people all the time. The bridge landed in front of us at least twice, maybe 3 times–my brain is a bit foggy now.

WE WERE SO CLOSE. 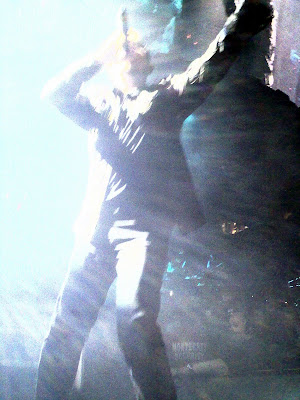 Bono, serenading Chicago right in front of me.
The camera used was a 3.5 megapixel cell phone with minimal zoon. Just sayin’. 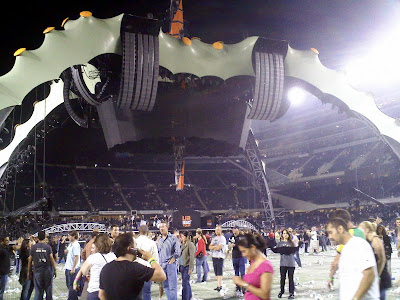 After the first show… we used the time to scope out the best place to aim for the second show. Also a good view of The Claw.