So what did we serve at our birthday party? By Alex’s request, first and foremost, there was a lot of fruit: cantelope, watermelon, red and green grapes, and strawberries. I would have loved to have added blueberries, but I just think they taste so much better when they are local. What we did have was as local as possible (meaning Mexico for the red grapes and USA for the green, but everything else was sent up to a local farmstand here from down south with very fast turnover, i.e., no warehouse time, except the strawberries, which were local). If only her birthday were later in the summer—then it could be super seasonal. But she only turns 3 once and fruit is what she wants, so we did the best we could.

Alex loves pork in almost any form, so I made pork tenderloins, seared and roasted, after marinating overnight in a Vietnamese-inspired marinade of soy sauce, fish sauce, lemongrass, garlic, some oil and brown sugar. The pork, which I accidentally overcooked by about 10 degrees, was a HUGE hit—the marinade kept the meat extremely flavorful and moist, despite the overcooking. No amounts are needed—just mix all of the ingredients in enough proportion to cover however much meat you have.

Keeping with the very loosely S.E. Asian inspired theme, I also made a Thai Cucumber Salad, recipe below, and a S.E. Asian Inspired Potato Salad, recipe also below. These 2 dishes were more to round the meal out since whenever I asked my now-3 years old child what she wanted all she really would say was fruit, pork and cupcakes. To my knowledge that is all she ate too, but hey it was her birthday. A good time was had by all and the food was pretty perfect for a weekend lunch. And it all sat beautifully at room temperature for 1-2 hours, so that I could be done cooking before she opened her presents, since we all know she was not going to eat before opening presents. I think that is too much to ask of a pre-schooler with a table full of presents in the corner!

Obviously no pictures were taken–sorry! I had other stuff on my brain! (edited 07/2015 to say I finally after all these years got around to photographing this dish, with spiralized cucumbers!) 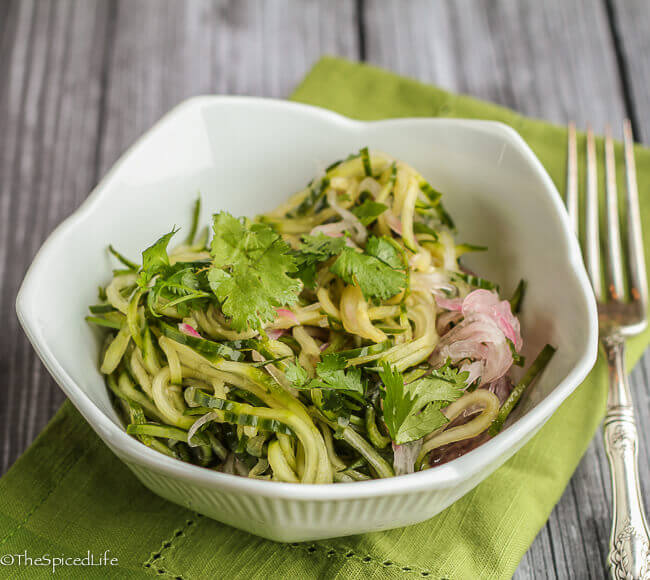 (can easily be scaled down for less people, although I warn you this stuff is usually devoured)

Bring the water, vinegar and sugar to a boil and then remove from heat, stirring to dissolve the sugar. Set aside to cool completely.

After the dressing has cooled, toss all ingredients together and serve. When I make this, I usually keep adding more cucumber to the dressing (it will be quite liquid-y, it is really more of a pickle in some ways) as the days go by to have excellent leftover cucumber salad.

Boil the potatoes, skin on, until just tender. When cool, slice into bite sized chunks.

In a small bowl whisk together the jalapeño, the garlic, the sugar, the vinegar, the lime juice, the shrimp paste, the oil, and salt to taste and let the dressing stand at room temperature for 30 minutes. Add the dressing to the potatoes with the coriander, the mint, and the celery and combine the salad well.