You are here: Home / beef / Sassi di Matera: The Cave Dwellings of Italy 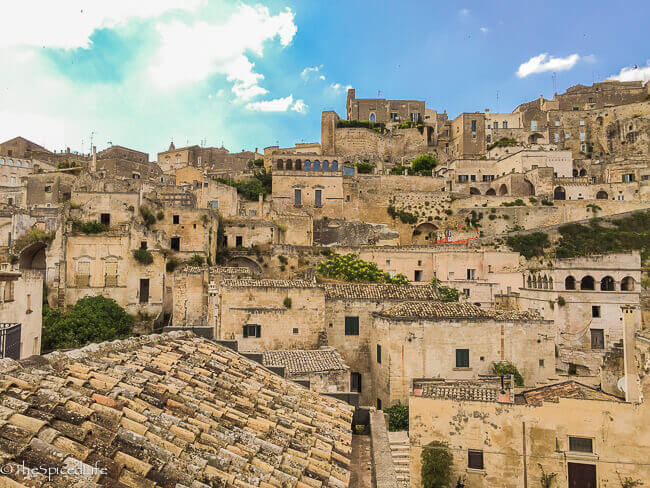 I am so sorry guys, I know I keep disappearing. I am having trouble getting into the swing of things at home! Add in a nasty 2 week sinus infection and then a quick road trip to see U2 in Toronto, and my brain is still pretty discombobulated. Also, I have not done much cooking yet, so I have loads of pictures to show you and stories to tell still about Italy, but I do not have many recipes to share with them, which bugs me.

Such is life. Or the life of this blogger anyway.

But I can talk a little food–because I know you guys love hearing about the food in Italy.  Our second weekend in Calabria we visited Matera, specifically to see the Sassi di Matera, but more on that in a minute. For dinner we headed to Lonely Planet’s top choice for dining in the area, Ristorante Il Cantuccio, where we discovered, after being seated, that the restaurant had come under new ownership the previous week. You would need to see Matera and the insane upward hike we took to find this place to understand our near hysterical giggles upon discovering this fact. 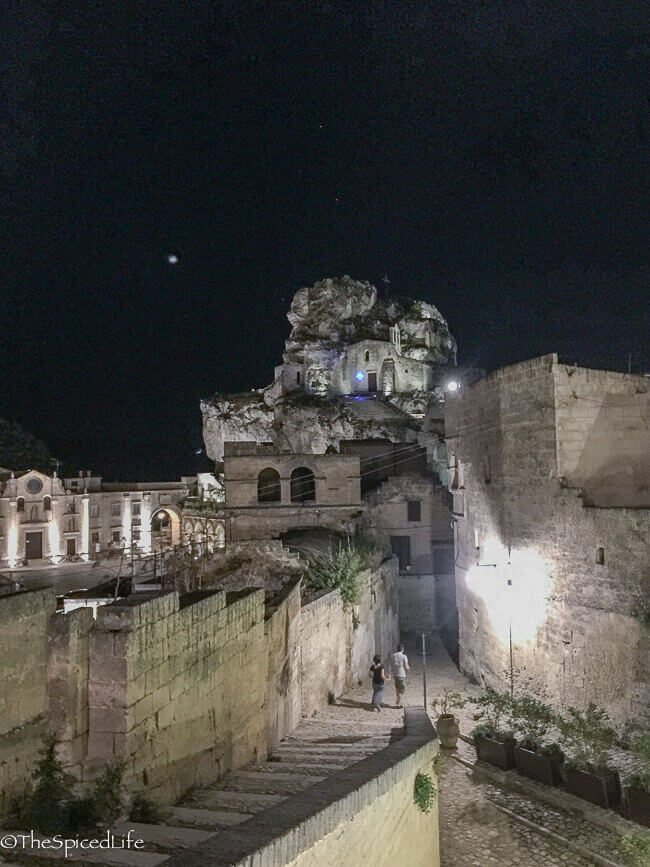 This picture I took of our walk home shows a little of our hike. And much like in Positano, often a road was a staircase. Anyway, happily the restaurant was still pretty good. John and the kids each ordered entrees (in Italy either primo or secundi courses), which were tasty, but I decided to order 3 different antipasti (appetizers). On the far left is zucchini marinated in thyme and vinegar on crusty bread. This was very different from anything I have had before, and I found it very delicious. In the middle is a sheep’s milk ricotta with spices, dried orange peel and honey. I enjoyed this spread on crusty bread. On the far right is one I was more familiar with–but love so much I was super excited to eat it in Italy. Carpaccio, thinly sliced raw beef drizzled with olive oil and lemon juice. Yum. Heaven in my mouth! My kids–who love raw fish in sushi–freaked out and refused to try it. Go figure.

Hey more for me! 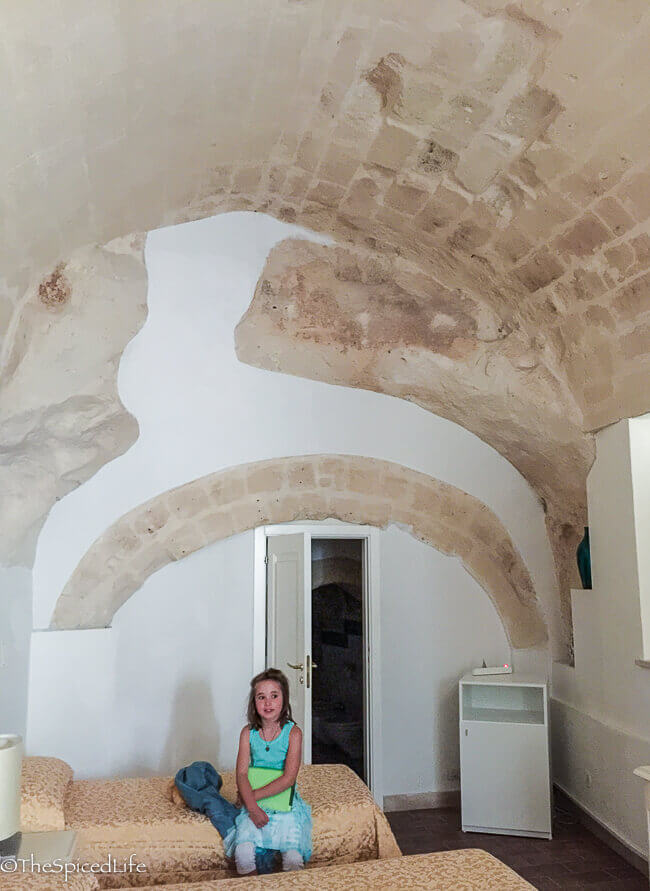 So anyway, the Sassi di Matera. This UNESCO World Heritage site is a troglodyte settlement (i.e., cave dwellings) that has been continuously inhabited since Paleolithic times. In the 1950’s the caves were evacuated, so they are not inhabited the same way now, but they are used–for example for hotels, as in the picture above, and they have also been opened up as museums that tourists like us can go and see how people lived. In the collage below, you can see my kids standing in a typical sassi kitchen in the bottom left. In the very bottom, Alex is standing in the main room of the dwelling–where their livestock would have lived with them. The center picture is the only church we were permitted to take pictures in–but we visited many churches in the sassi, with religious paintings on the cave walls. Sammy especially enjoyed visiting the sassi. 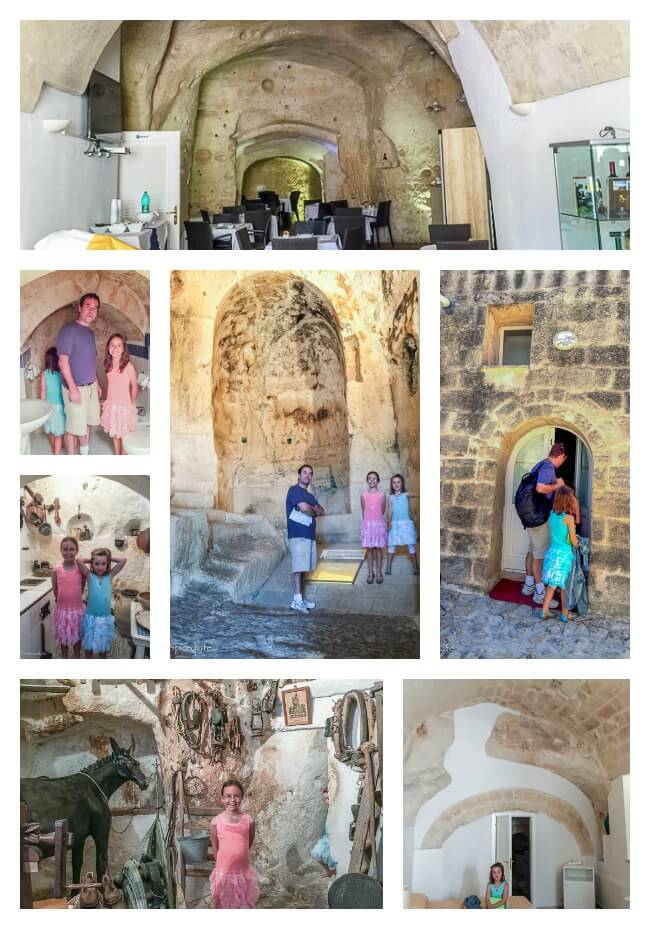 When we told people in Rende that we were visiting Matera, they all said the same thing: bellissima!! At the time I was surprised–thinking that the sassi sounded like an important and interesting place to visit for many reasons, but beauty had not occurred to me. They were right, however; it was gorgeous. 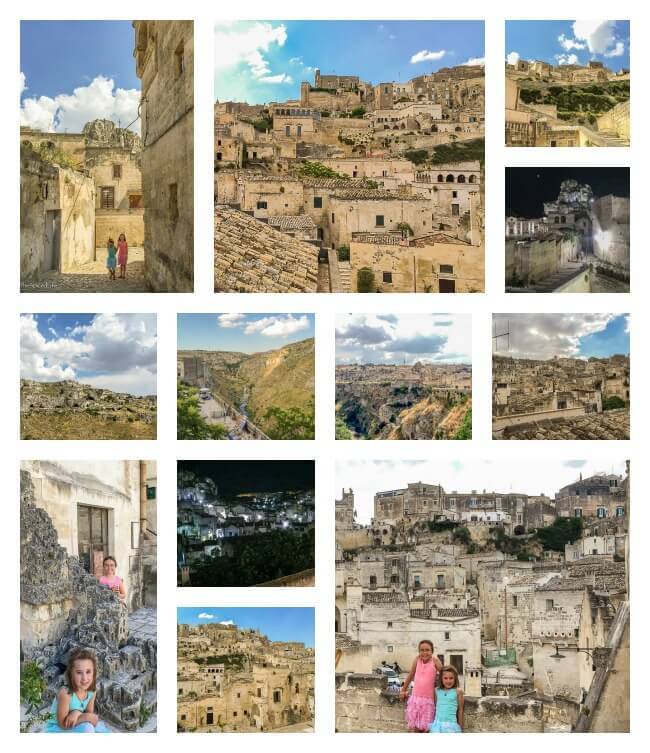 It was also the hottest place we visited. I think the heat index was near 100 the weekend we were there, so as gorgeous as it was, I won’t lie it was hard to want to stand outside just appreciating it while the sun was out! It felt like a very different world–it has been used to film biblical scenes, and it did indeed feel more like how I might imagine the Middle East in some ways.  The beauty also has a sharp edge–on the one hand it is very cool to think that people have been living there, more or less in the same “houses,” for the last 5,000 (maybe even 9,000!) years. On the other hand, it is kind of disturbing to imagine that people in the 1950’s were living in these caves. And the Italian government forced evacuation because the conditions in the caves were so bad–malaria, poor hygiene, poverty. Tourism has probably helped to save the area, but it is also kind of creepy to be a tourist of extreme poverty if that makes any sense.

I am definitely glad we saw it. When we first got to Italy and were driving down the freeway into Rome the girls expressed disappointment that “it looked just like home!” We saw many places of course that were nothing like home, but the sassi were especially satisfying that way. And I think it was good for the kids to see such humble dwellings. I definitely recommend a visit if you are in Italy. 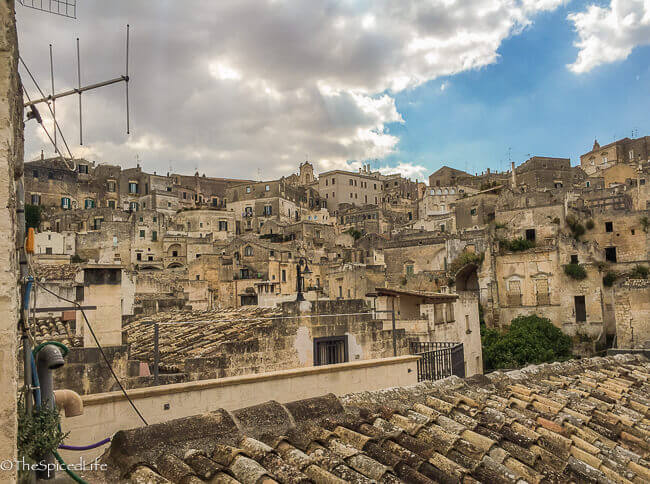