Old Fashioned Chocolate Glazed Chocolate Bundtlettes are like the little black dress of chocolate cakes–simple, super easy and absolutely stunning. Scroll down for the recipe–or read about my adventures driving around Mount Etna first! Affiliate links have been used in the post to link to items I am discussing. 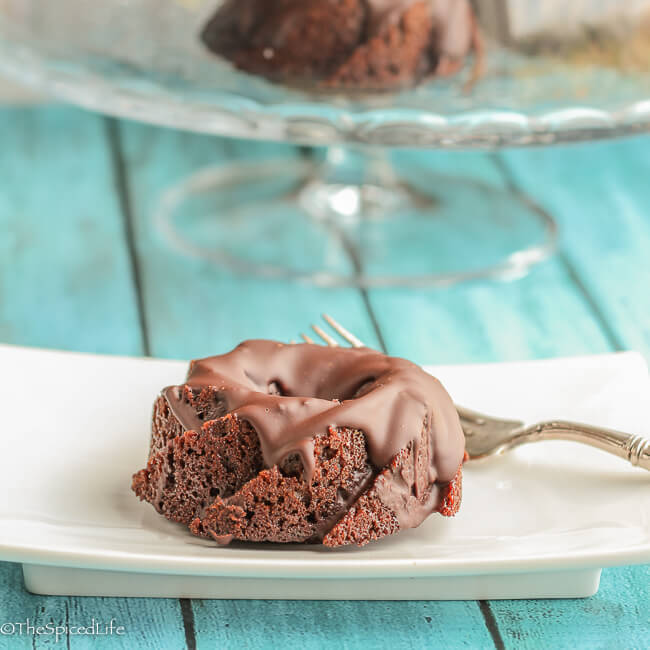 As I sit here composing this post, I cannot decide if I am crazy to try to work in recipe posts with posts about Italy. And maybe I am crazy to keep writing about Italy–except this blog is kind of like my journal, and I want to talk about what we did while I still remember what picture is of what. As it is, some things have gotten hazy! Tell me in the comments–do you prefer the Italy posts that are separate, or the ones where I include a random recipe as well? 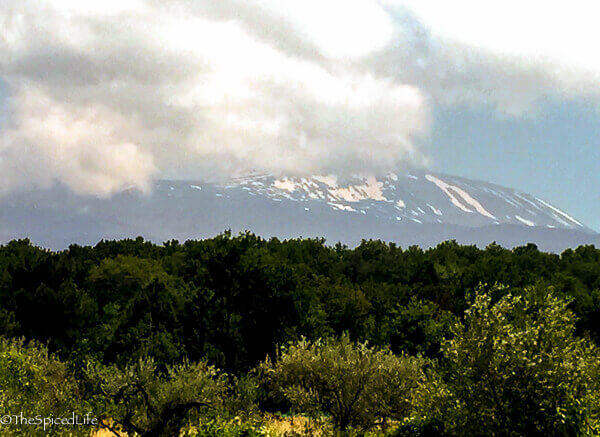 Mount Etna can be seen from very far away in Sicily, because even on a cloudless, blue-skied day, there will be clouds of steam and gas coming out of the vents at the top of Mount Etna. Seeing that, combined with the snow, really makes it hit home that that is one big volcano you are looking at!

Anyway. Mount Etna! I told you guys about our interesting but somewhat unfulfilling all day tour that we took in Sicily. It was exhausting. It took all day. The relevance here is that when we decided to stay in Siracusa, part of our reasoning was a hope that we could also do an excursion up Mount Etna as well. Unsurprisingly, we just ran out of time. John and the students took the train back to Rende, but the kids and I decided that even if we could not go to the “top” (the top being the place it is safest on that particular day to get close to the vents), we would have fun driving around Mount Etna instead. I found a wonderful blog post (the internet! How did people visit totally foreign places before the internet?!) written by someone in our very shoes, someone who had planned to ascend (as far as possible) the volcano, who instead ended up driving around. 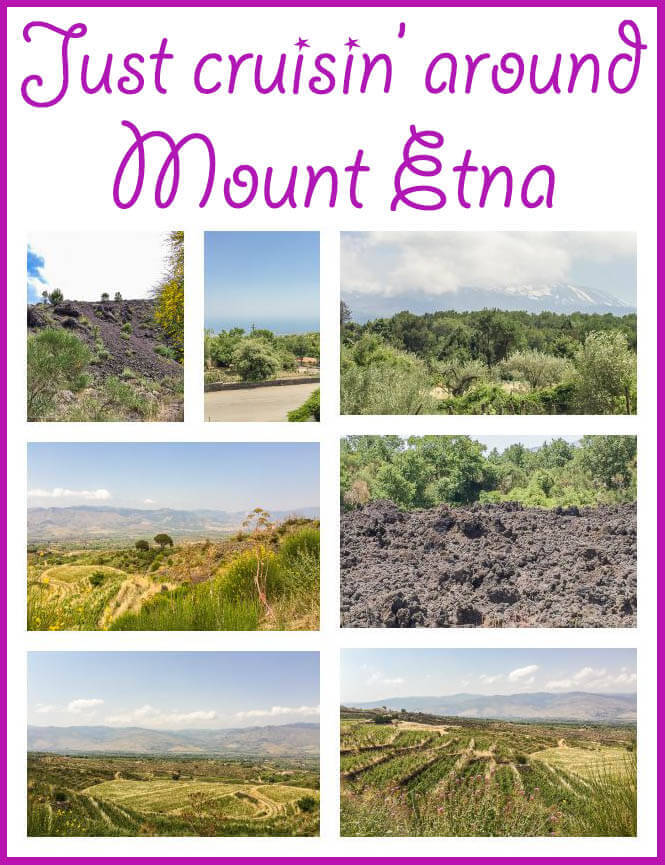 We chose as our destination Randazzo, the town that is nearest to the summit of Etna, located at the north side foot, and that somehow has escaped destruction time and time again. The fact that the town had come close on occasion to being destroyed and was so very close to the summit definitely added a thrill to our drive. The children asked more than once, was I sure we would be safe? I promised them that while towns are indeed destroyed by lava, it does not usually happen so quickly as to catch drivers down at the foot unawares. 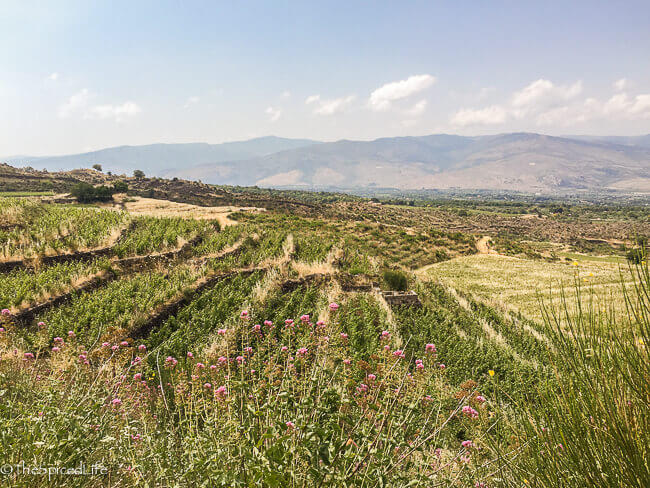 One of the themes of our drive–and indeed one of the themes of that wonderful blog post about driving around Etna was why on earth do people live here? And the answer is simple. The lava that spreads over the terrain over time turns into rich, volcanic soil. And the lure of farming this soil is too much (for some anyway) to resist. The middle picture on the right in the collage shows a good idea of the volcanic soil–it also made it easier to imagine just how close the lava has come in the past to Randazzo without having actually hit it. The farming is also interesting, as you can see, because the land is not flat, leading to almost terrace style rows of plants. 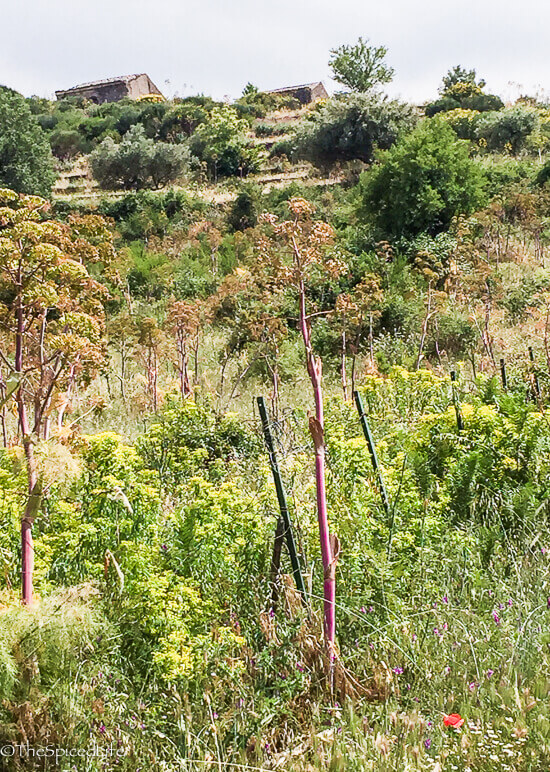 The difference in soil, terrain and weather led to us noticing some really different plants. These extremely tall, nearly violet stemmed plants (trees? flowers? skinny shrubs? grass?) especially caught my eye, and I insisted on pulling over to take a picture. If anyone has any idea what this is, I would love to know! I found them beautiful, but in a very foreign way, almost as though I was looking at plant life on another planet or something!

OK I am drawing a blank for good segues… other fantastic things in my life? Something to make me feel better about no longer being in Italy? More proof that Sammy and Alex seriously live the Good Life? Whatever works for you… 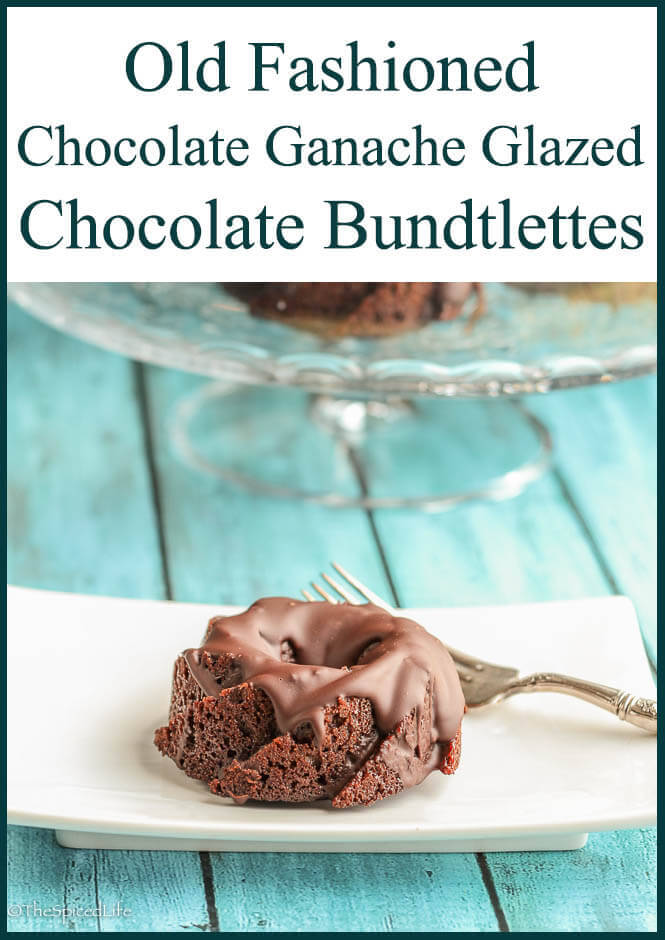 , a cake that went back to a neighbor giving the recipe for a tube cake to her grandmother in 1949! I love recipes like that! And when they are also so easy? Double score! Now I made these cakes for a tiny dinner party we had with some of John’s colleagues, and I decided that because of that I wanted them with a chocolate glaze, not just powdered sugar.

So that meant chocolate ganache of course, right? Which was all well and good, except, I had just gotten back from Chicago and we had no dairy in the house  (I do not count butter, yogurt or cheese). Yikes! How could I have let that happen? So while I wrote the recipe for using my favorite cream and chocolate ganache, I do want to tell you what I did. And the most important lesson from this story is–don’t panic, trust your instincts and taste buds, and just keep fiddling! Anyhoo, I saw online that yes you could make ganache with water only, but it then does not have as much fat globules to emulsify as it would with cream (it has some from the cocoa butter). So I got out some light corn syrup, and placed about half bittersweet (72% cacao) and half semi sweet (60% cacao) chocolate in a bowl with 2 tablespoons of cubed butter. I used about 8 ounces of chocolate total. I poured about 3/4 cup near boiling water over this, let it set, and then whisked. I added a pinch of fine sea salt and a teaspoon of corn syrup.

I am not giving you a recipe for this, because I was not fussy with measuring, but more a story of how to troubleshoot a ganache on the fly. In its first incarnation, I drizzled it over the cakes and it was way too thin–it instantly absorbed into the cake (yum! but not pretty). Then I added a bit more chocolate and gently heated it over a water bath. Then, the ganache was a little gloppy/grainy. So I added some more hot water, one tablespoon at a time, until, voila! The ganache was shiny, smooth and thick. My guests definitely got an inside look at my obsessiveness firsthand, but the ganache was nice enough that these pictures are actually from the extra cakes, the next day! So if you reach for the cream and it is not there, remember you have other options when making ganache! 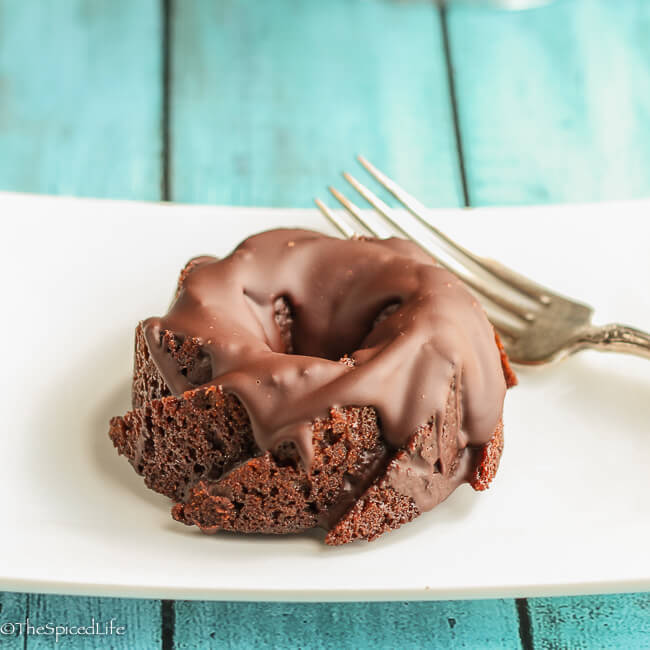 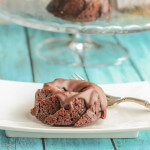