You are here: Home / corn / Oh The Things We Do For Love: Shrimp & Scallops With Warm Tropical Fruit Salsa and Corn On The Cob 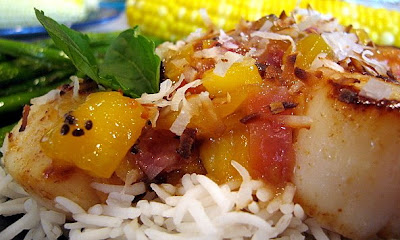 Have any of you ever tried to learn to cook a food you did not like?

That’s me and shrimp. When it was only me and John, I figured he could just occasionally order shrimp in restaurants–similarly I never ate duck at home because he did not like it much. But now we have kids and it turns out they like shrimp–in fact Alex LOVES them. Like chocolate and ice cream kind of love.

In other words, sheer lunacy. 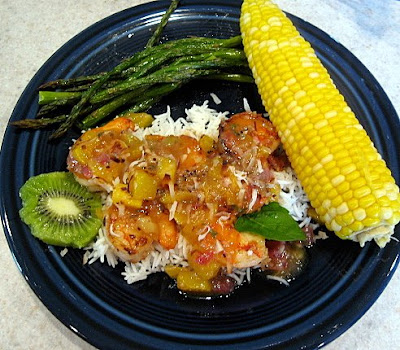 But anyway so I have been trying to cook with it in ways that don’t offend my own palate (i.e., make the whole dish taste like shrimp). Kind of like in that green curry. You would think I was a total novice in the kitchen–that’s how out of my element I felt at the fish counter yesterday when purchasing this shrimp. I practically made Josie do it for me. And I made John peel the darn things before I cooked them.

In the meantime, Alex’s birthday was coming up in June, but we will be gone a lot in May so I am planning it now. I had already settled on a dessert, but I was having trouble thinking of the main course–while Alex loves a lot of food she doesn’t LOVE a lot of savory dishes (except maybe macaroni and cheese and broccoli). But then I realized she sure does love shrimp that way. So I started trying to think of a shrimp dish. 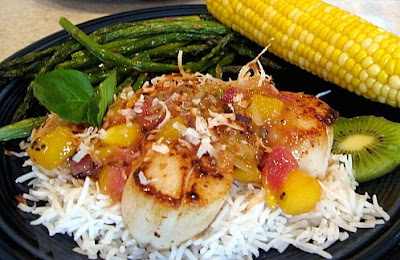 Enter Jaden of Steamy Kitchen and Simply Recipes. Confused since Jaden does not write Simply Recipes, Elise does? Well Jaden was guest blogging on Simply Recipes. Anyway, now that we have that straightened out, the point is that I was reading Simply Recipes when I came across Jaden’s recipe for Sauteed Shrimp With Warm Tropical Fruit Salsa. 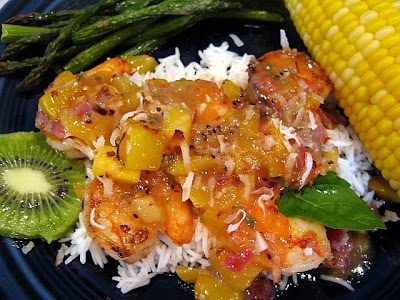 First, I can also serve it with seared scallops. Second, it has a sweet, fruity “sauce” on it, which Alex should like–and I can keep the shrimp separate from the salsa, which is nice for me. Third, the tropical flavors keep it interesting and different from everyday–good for a birthday party. 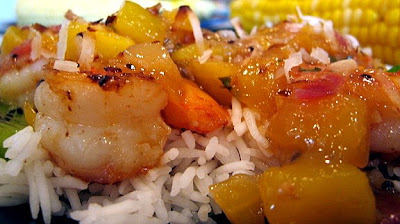 This weekend was the trial run–remember, totally out of my element with shrimp. I served it with roasted asparagus and corn on the cob from Florida, which everyone has been saying is really good this year. I am normally very suspicious of traveled corn, but everybody, in this case my sister Josie and my brother Chris, was spot on (I am sure my baby brother Nick would agree if he had tried it but he has been busy with a newborn baby). The asparagus was a seasonal no brainer. For the actual party I will skip the asparagus, but wow, it turns out Alex likes corn on the cob as much as shrimp. So I guess her meal is almost set now. 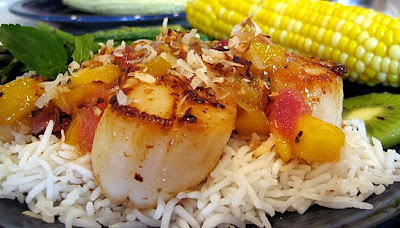 OK, I linked to the recipe above; here are my changes: I seared the scallops in an oil/butter mixture and then sauteed the shrimp after that was finished (thus preserving the shrimp-free

flavor of the scallops, haha). The shrimp turned out beautifully, and so easy. John devoured it. And look at the crust on the scallops–I definitely prefer sea scallops to bay scallops and that is why. Next change: I cooked the Warm Tropical Fruit Salsa in a separate pot. I began by sauteing the onion with 2 cloves garlic. After adding the mango and kiwi, I also added guava jam and some hot pepper jelly–mild homemade jelly by Josie for the kids and stinkin’ hot habanero jelly in addition to that for me and John. I served with a small amount of basmati rice to soak up the sauce and sliced kiwi and mint leaves for garnish. 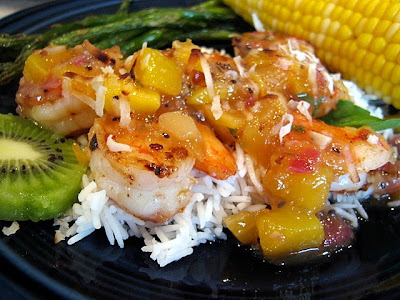 Last bit of advice: if you serve this with corn on the cob, as I intend to, I recommend fresh lime juice instead of butter for the corn. It fits the theme better and is just as tasty.