You are here: Home / maple / How To Delay Your Bread Once You’ve Started: Maple Oatmeal Sandwich Bread 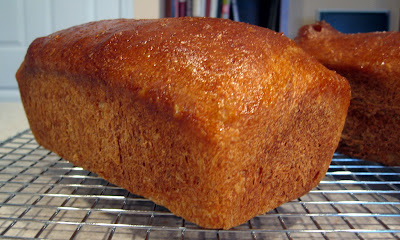 This bread is just amazing.  I want to be clear about that.  The mapliest maple bread you have ever tried.

But first I want to address a misconception a lot of people have about making bread–that bread baking will not fit into their schedule.  This does not have to be true.  With a user-friendly sandwich bread you can mix it, knead it, let it rise, change your mind about having bread, punch it down, start over with a slow rise in the fridge, shape it and place it in a pan and then freeze it, waiting for the day you want to bake it.  Whether you want it to rise quickly–in a microwave, for example, with the light turned on (to mimic about 80 F), or slowly, in the fridge, is up to you.  Or you can get it halfway there and then freeze it for later. 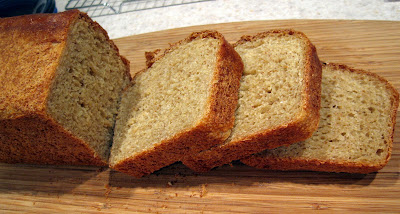 This happened to me yesterday when it took all day for the workers to put the hood into my kitchen.  Luckily, the main carpenter who has installed all of our cabinetry and who was therefore here the longest, is a really great guy who is friendly to my kids.  And just look at the finished result: 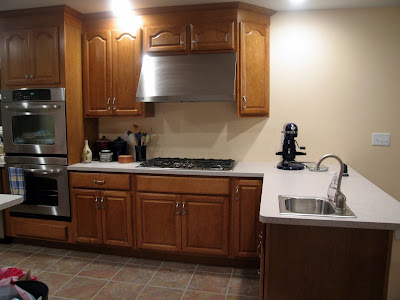 But when he was here still working at 4:30 (working in the area of the stovetop and ovens) it became clear to me that the bread was not going to happen, nor was the soup, and I called John to get take out.  The bread was about halfway through an accelerated first rise (accelerated because I started it late and so I had it under the oven lights) when I punched it down and put it in the fridge.  By bedtime it had risen, at which point I shaped and put it in pans and froze them to halt the rise.  This morning first thing (9:30 for me) I removed the pans.  Because it takes a long time to warm enough to rise from a frozen state, the bread was ready perfectly at dinner. 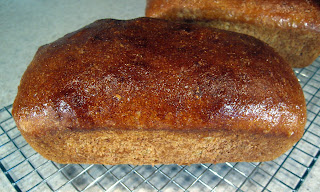 And wow what a bread.  I have had maple breads before–breads where the maple acted as a sweetener but was not particularly discernible otherwise.  Not so this bread–this bread is Maple.  It is definitely sweet for a sandwich bread, but not too sweet, at least not in this sweet tooth’s opinion.  I am already dreaming about how good it will be in the morning. 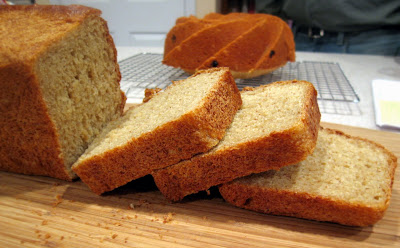 Maple Oatmeal Bread
Adapted from Bernard Clayton’s New Complete Book Of Breads
2 1/2 cups boiling water
1 cup rolled oats
1 T teff seeds (optional)
1 package (scant T) dry yeast
3/4 cup real maple syrup
2 t salt
1 T cooking oil
1 1/2 cups white whole wheat flour
3 1/2 (approx.) cups bread flour
In a large mixing bowl pour the boiling water over the oats and teff seeds (if using).  Let it sit for 30 minutes (or up to 1 hour).  Add the maple syrup, salt and oil and stir.  When the mixture has cooled to lukewarm, add the dry yeast and the white whole wheat flour.  Beat on med speed for 2 minutes, until well combined.
Add the bread flour slowly, mixing slowly, until the dough forms a rough, shaggy mass.  Leave it for 20 minutes to let the grains absorb the liquid in the dough.  Switch to the dough hook if using a mixer and add enough flour or water that the dough becomes smooth, clearing the sides of the bowl.  The dough should be smooth and elastic.  Knead for 5 minutes using a mixer or 8 minutes by hand.
Transfer the dough to an oiled large bowl and cover.  Let it rise for 1 hour or until doubled.
Grease 2 8 X 4 bread pans.  Divide the dough in half and shape each half into a loaf shape.  Place in the bread pans and cover, leaving to rise for 45 minutes or until the dough has risen over the edges of the pan.  When it is close to risen, pre heat the oven at 350 F.
Baked at 350 F for 40-50 minutes, rotating from front to back halfway through.  The bread is done when it reaches an internal temperature of 200 F or sounds hollow when thumped on the bottom.  Remove the loaves from their pans and cool on a cooling rack.  Slice when warm but not hot, about 45 minutes later.
« It’s Been A Long Time… "Baked" Brownies
Out Of Practice: Mug Chana Nu Dal (Sweet Split Green Lentils & Yellow Peas) »