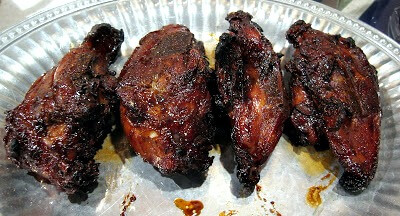 Sheesh I made all this good food over the last week and have not shared any of it! It has just been that kind of week. I am hosting playgroup tomorrow–haha, what were we thinking? Nothing is unpacked and the house is a wreck. I hope no one wants to look, uh, anywhere other than the kitchen and the half of the basement reserved for a toyroom.

And to complicate matters, the builder came by during dinner on Friday, which is why these pictures–and the ones yet to come of our dessert–are so terrible. I kind of grabbed the camera and snuck the photos each time he went upstairs to install a doorknob. Trying to explain why I was photographing dinner just seemed like an exercise in craziness. And every time I grabbed my camera, Alex yelled about needing hers (she got one of those toddler proof digital cameras for Christmas and now thinks she is a budding food photographer). 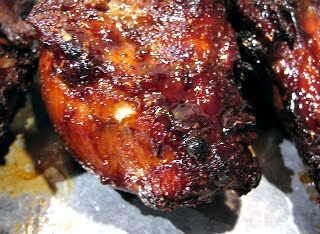 Anyway, this Javanese Grilled Chicken, taken from James Oseland’s Cradle Of Flavor, relies on an unusual process to end up with what has got to be one of the tastiest and most gorgeously lacquered grilled (well, broiled) chicken breasts I have ever managed. If you enjoy SE Asian food and/or food related travel writing, I highly suggest you pick up Oseland’s book. It focuses on the islands of Indonesia, Malaysia and Singapore and has really fantastic recipes and writing. I just wish it had more photos.

But back to the chicken. Basically you simmer the chicken in a very aromatic broth, then you marinate it and then you grill it–only I broiled it, basting it with the marinade. The only thing I would do differently next time is I might poach the chicken rather than simmer, which granted would take longer but would also keep the chicken even more moist, especially because I used breasts. Oseland calls for some pretty exotic ingredients in his book, most of which I can get but the 2 that continue to stump me are daun salam leaves and candlenuts, the first of which this recipe called for and so I had to leave out. Oseland did say that the galangal and daun salam leaves both could be left out if need be. 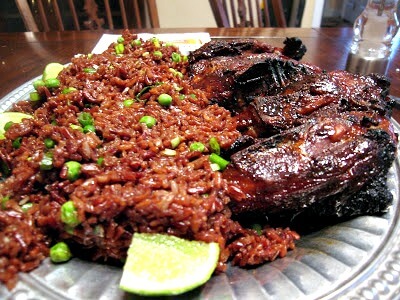 3-3 1/2 lbs worth of bone-in, skin-on chicken parts (one whole chicken, cut up, or parts of choice–I used breasts because that is what I had)

First make the broth: in a large saucepan, bring all of the broth ingredients to a boil. Cover and reduce to heat enough to maintain a vigorous simmer for 10 minutes.

Meanwhile, rinse and pat dry the chicken pieces; if you are using a whole chicken, cut it into 10 pieces. Add the chicken pieces to the pan after the 10 minutes and bring back to a boil. Then reduce the heat to the barest simmer, stirring the chicken occasionally. You want to become about 3/4 cooked, which should take around 30 minutes. Keep in mind it will be cooked more later.

While the chicken is cooking, begin the marinade. Place all of the marinade ingredients into either a small food processor or a blender. Pulse until no slivers of garlic are visible.

Using either tongs or a slotted spoon, remove the chicken to a large but shallow non reactive bowl. While the chicken is still hot, pour the marinade over it. Turn the chicken every 10 minutes, marinading for at least 30 minutes and up to overnight (in which case cover it and turn more infrequently).

His grilling instructions are essentially to oil the grill well and to place the chicken 5-7 inches from the fire. Grill about 5 minutes per side, until each side is well basted and crispy.

I chose to broil: Preheat the broiler for at least 5 minutes before beginning. Position the rack so that the chicken will be about 3 inches from the heat source. Do not discard the marinade. Place each pieces of chicken on a foil wrapped cookie sheet, fleshy side up. Broil until the chicken begins to brown and develop some charred spots, about 4-5 minutes. Baste each pieces with about 1 tablespoon of the marinade. Turn the pieces and broil more, continuing to baste. Keep broiling, basting and turning until each pieces is a deep reddish brown and crispy, with some charred spots. You may use up the marinade.

Using tongs, transfer the chicken to a serving platter and lest rest for 10 minutes.