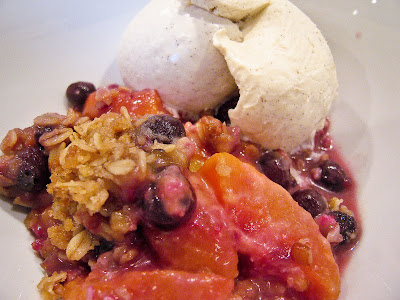 Is it weird that despite the unbelievable ripe, sweet juiciness of these peaches my favorite thing about this crisp was in many ways the color? I just keep staring at it and thinking that deep purple and hot pinky-peach combo could not exist in nature. And yet it does, albeit from 2 different fruits.

I’ve never liked peaches much. Growing up in the north, my memories are mostly permeated by terrible canned peaches. I’ve had freshly picked, organic ones…. but only as an adult and only in the north. I am now convinced that I have either just gotten unlucky a few times or maybe there really is something to this whole Georgia thing. 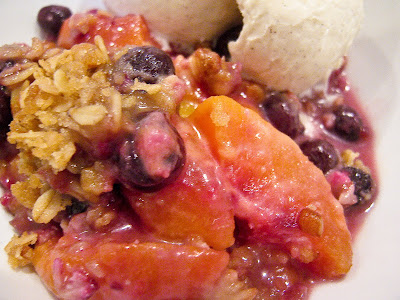 Don’t get me wrong, I am sure that for peach lovers it is better to have a locally grown freshly picked Pennsylvania peach (which my husband loved when we lived there) than to have one that has sat on a truck for a few days from Georgia. But for this non-peach lover, a freshly picked, locally grown Georgia peach was a revelation. So of course I brought home a big bag.

Most of them were eaten raw, but I just had to take the opportunity to make a peach dessert. I found this peach pie when I was searching the internet, and I was immediately attracted to the streusel topping. I LOVE streusel. But pie crust I could do without, and as a Texan twitter friend said when I asked about baking it sans crust: “Around here we call that a crisp, y’all.”

So a crisp it was. And because I can’t just fiddle a little, I added blueberries. Dark purple blue and hot peachy pink is a color combo that is meant to be. And it turns out the eye does not lie, because this crisp was freakin’ fantastic. 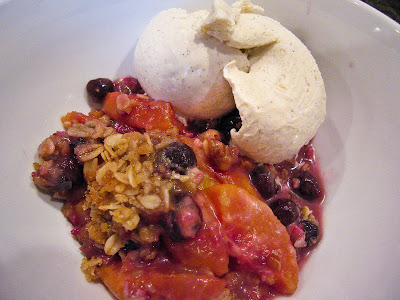