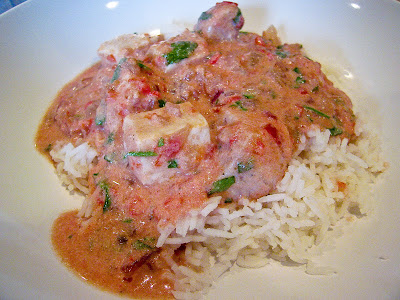 Before I forget (because I already forgot once and posted this recipe without it), be sure to check out my essay “Shelling Peas & Snapping Beans“at Flavorful Memories. Leslie runs a business and keeps a beautiful blog dedicated to preserving memories through and about food.

This fish stew was a big leap forward for our family in terms of how we approach seafood. I cannot explain why, at least not in any rational, reasonable manner, but John and I both have always been turned off by the idea of fish stew. Maybe I did not believe it would hold its shape, and instead would dissolve into a pile of mush. Maybe I worried it would taste like the shrimp boils of the deep South, which I have never cared for. Whatever the reason I had avoided them. 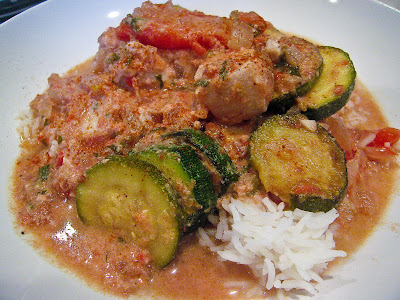 The pictures from the first night, without zucchini and tomatoes, are nicer because 2 nights of simmering caused the coconut milk to separate a bit and the pics have cayenne pepper sprinkled on the dish, which also caused it to look a little funky. However, these pics from the second night do reflect how I would make the dish the next time, i.e., with additional veggies.

Having said all that you are probably wondering why I tried this recipe, and there is no good answer other than I felt I should. It was just time to find out if we were right.

Boy were we wrong. Everyone loved this.

This stew actually comes from a casserole book, and I guess it depends on your definition of casserole as to whether it it is a casserole or a stew. To me (but obviously not to the author of the book) a casserole should be able to be eaten as is, with no additional components, and it also should not be very soupy. This fails on both counts because it is soupy and it needs to be served with rice. In my book that is a stew, so I changed the name. I also added (the second night–the recipe made so much broth that I made the dish with fresh fish and veggies in the same broth the second night) sliced zucchini rounds and wedges of fresh, local tomatoes–and I would keep these changes the next time I make this.

And yes if you are wondering there will be a next time. And you can also expect to see more experimentation with braised or stewed fish in the future on this blog. 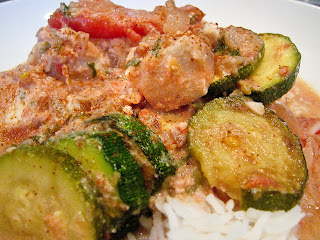 A note about the oil: According to Wright, the dendê oil is important but difficult to find, so he suggests a walnut oil based sub. I had neither, so after thinking about the other flavors, I used half olive oil and half Styrian pumpkin seed oil, which has a very strong, almost nutty flavor, with some paprika mixed it. I cannot speak for its authenticity, but the sub worked fine. 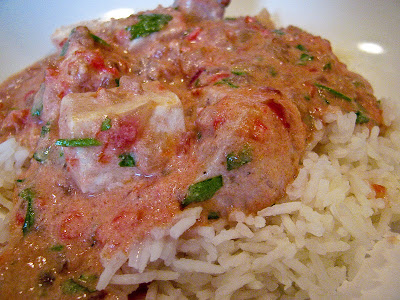 For another take on Brazilian seafood stew with coconut milk, be sure to check out my Moqueca with Potatoes and Mushrooms!: 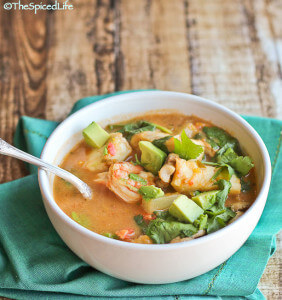