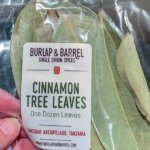 No that is not a typo. I never did get a best of 2018 post worked up–I am blaming the thyroid cancer–so I guess you guys get two posts. Especially because some of the things I was going to discuss anyway I realized I technically discovered in 2018 but did not really appreciate completely until 2019, when life slowed down a bit and I had the focus to enjoy them. And honestly I enjoyed the single origin, fair trade spices discussed below so much, that I realized I had a lot to say about them!

When 2018 started I was full of plans to share amazing before and after pictures of my new kitchen (and the fact that I am only addressing this now tells you just how distracting 2018-2019 was). But then that cough came, followed by the lung scan that led to many other scans which led to the thyroid cancer diagnosis (and still more upcoming scans of other organs that they want to keep checking on). So when I had that very special moment in time, you know the one where the kitchen looked amazing and was not yet cluttered, I was not thinking about the kitchen enough to photograph it. Plus, as you will see from the “Bundt Pan Tour” video above, the chimney to the vent was not finished when everything else was done– as matter of fact it took about a year. I think steam still comes out of John’s ears when it is mentioned.

But otherwise we love the kitchen! Maybe someday I will have a good picture of it to share. And obviously it was by far and away the most important culinary thing to happen in 2018. 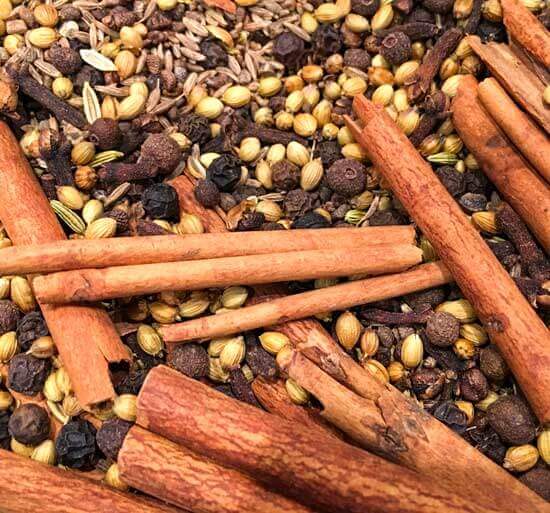 The second most important thing has been so exciting and such a big change for me that I honestly forgot it happened in 2018 and was going to write about it as having happened in 2019. Ethically sourced single origin spices.

It started with an article in Epicurious about fair trade spices. An incredibly persuasive and intriguing article–I highly recommend you check it out. I immediately put an order in for turmeric from Diaspora Co. and for wild mountain cumin seeds, Mediterranean coriander seeds, Urfa Chile Pepper and more from Burlap and Barrel. I was instantly wowed by both companies–yes eliminating the middle man makes a difference with spices, which makes sense since the fresher a spice is, the more intense it is. And by only sourcing from particular locations, the spices have more individual personality, for lack of a better way to put it. I wrote more extensively about the Burlap and Barrel spices in my Mahi Mahi with Stewed Spiced Peaches if you are curious. 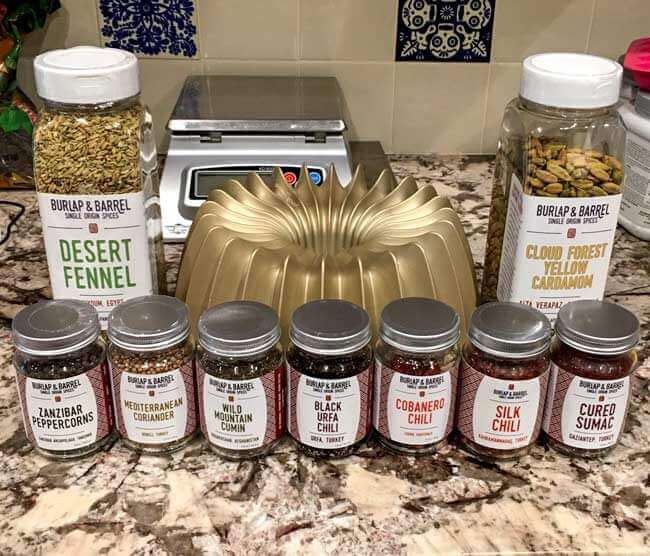 In the case of both companies, occasionally a spice or herb has only been available in a larger quantity, in which case I have shared with my sister, mom and brother in law. Such was the case with the cardamom–the fennel seeds, on the other hand? We have now purchased three (!) of those containers because Alex loves munching on fennel seeds and agrees those are the best she has tasted. 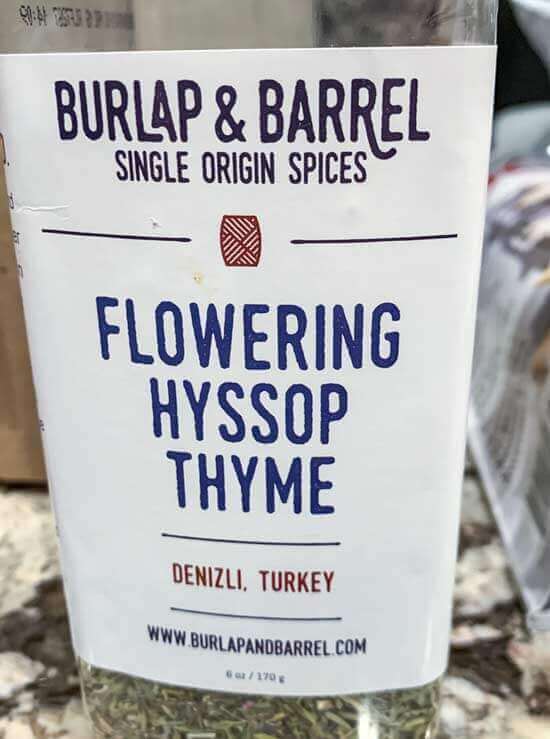 As each company has expanded their offerings, I have ordered more and more. The thyme is another one that got shared. Initially Diaspora only had turmeric, but they have also increased their offerings and I am loving their Indian chile pepper (turmeric pictured below:). 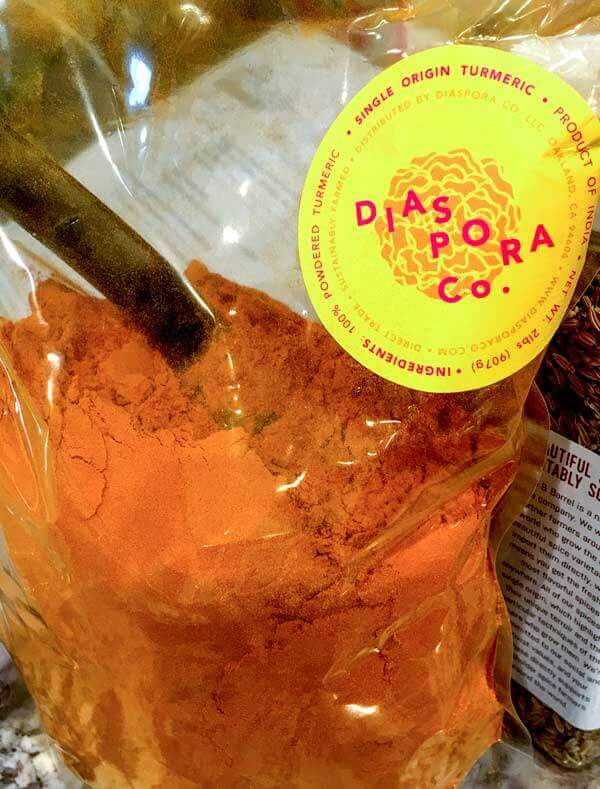 Spices from both companies have formed a large part of my gift giving the last two Christmases–that is how in love with them I am. And I promise no one is paying me to say any of this. 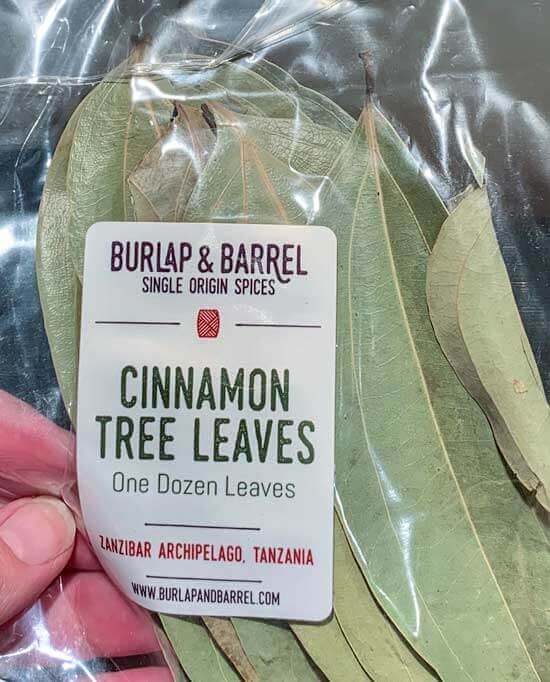 When I purchased for myself I also got a bag for my sister, because she loves playing with unusual spices just like I do.

The (2019) Christmas Eve dinner I made for my in laws, Indian as always, was cooked almost completely with spices from these companies. Thus far neither company sells mustard seeds, much to my sadness, and I make my own garam masala. The Burlap and Barrel Wild Mountain Cumin Seeds are rapidly replacing all of my cumin and the Diaspora Co turmeric immediately became my go-to (the turmeric pictured below are dried slices, whereas the turmeric powder I am using is from Diaspora). 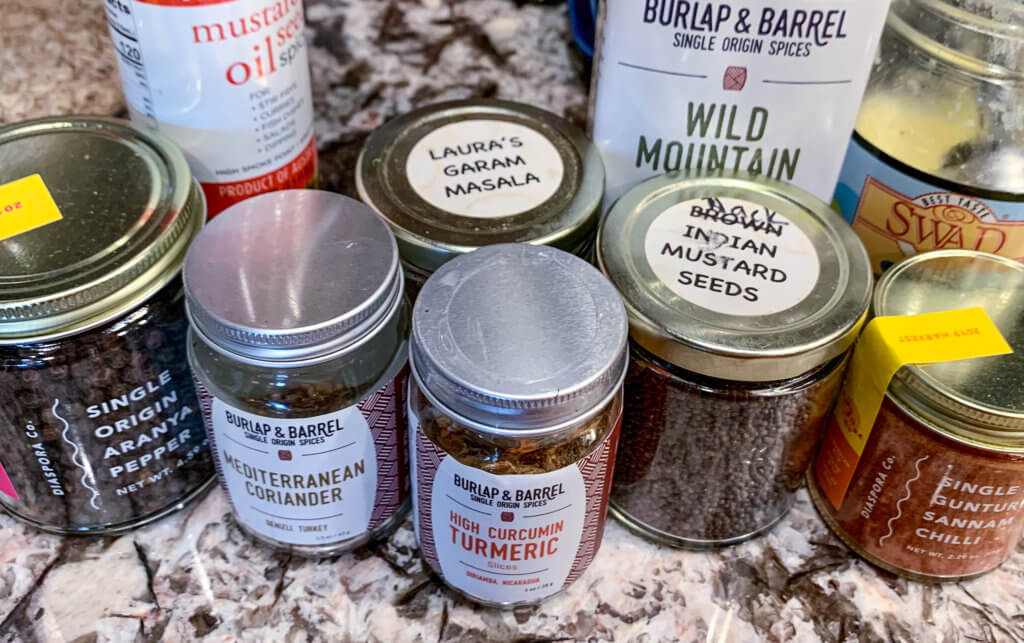 Setting out spices and oils for the amazing Indian brisket I made on Christmas Eve–that alas went un-photographed. I will have to try to re-create!

I seriously get excited when either company sends me an email with a new product–if you like spices I cannot recommend them highly enough.

My main other culinary discovery from 2018 was finally crying “uncle!” and buying and learning how to use an Instant Pot. I don’t think I will ever be one of those people who uses it nonstop, but I do love how easy it makes dried legumes and long cooking meats.