You are here: Home / muffins / Basic–but so much tastier than that sounds–Pumpkin Muffins 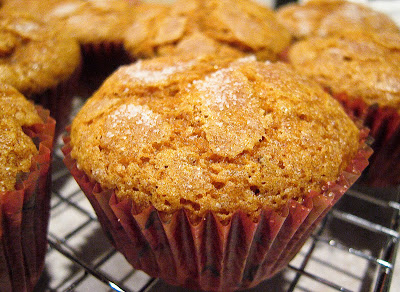 It’s hard to be a baking mom in 2010. You dream of all the goodies you’re going to whip up for your little darlings and their friends, but then they get to preschool and everything must be store bought and individually packaged. And processed in a nut free facility. Now don’t get me wrong–parents of kids with serious food allergies must live in a state of fear I cannot comprehend. But at the same time it is a little frustrating to have spent 3 years extolling the virtues of homemade, un-processed foods–and the healthiness of seeds and nuts–only to suddenly be sending a totally different message to your kid with his or her school snack. 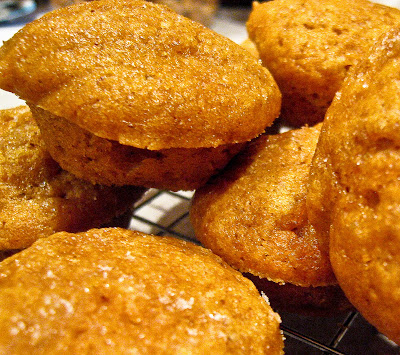 So imagine my state of joy when I realized that our school district is one of the last allowing homemade snacks. When it is our turn for snack day, Sammy gets freeze-dried fruit, goldfish and string cheese -all individually packaged- at preschool, but Alex, in kindergarten, gets homemade granola bars, apple pie bars, and now these muffins (to be fair the last 2 are not as healthy because their class was celebrating a particular fruit/veggie and so health was not my primary concern). Our classroom does have a nut allergy, so I don’t ever send in nuts, and if it is a questionable ingredient (like sesame seeds, which I guess he has not tried yet), the boy with the nut allergy has some extra snacks that he can eat. I mentioned in the apple pie bar post that the class was studying apples and so the teachers asked me to bake. Well the next week (last week) they were studying pumpkins, and I had an inkling that something pumpkin would not go awry. As it turns out, when I took the pumpkin mini muffins in on Friday, the teacher told me, beaming, “I wanted to ask but I was afraid I was becoming obnoxious!” Ask away–I love baking for my kids and I love having legitimate reasons to whip up goodies like these. 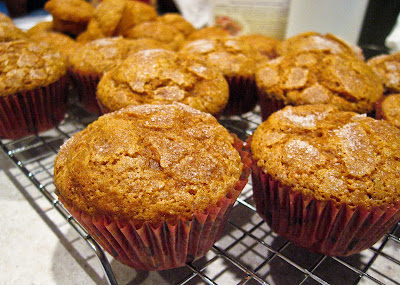 Pumpkin muffins that really celebrate being pumpkin and nothing else are not so easy to find. I wanted the muffins to be something that appealed to most of the kids, since they were studying pumpkins, and therefore I rejected anything with seeds or dried fruit in it (and obviously nuts). (With my own kids I don’t like to indulge that kind of visual pickiness, but I wanted this snack to be about pumpkins and nothing else.) I also rejected pumpkin muffins and breads with additional flavors, like apple or banana–for the same reason (plus I hate bananas and I was looking forward to these!). I had given up on regular recipe sites and was randomly searching blogs when I came across this recipe. Just pumpkin and fall spices–perfect. 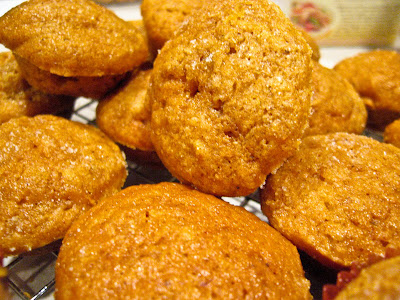 I made this recipe in a frenzied week of baking, as I made treats for another school project and my daughter’s birthday parties. I tripled the recipe, aiming for at least 12 standard muffins and 60 mini muffins (I wanted each kid to get 2 mini muffins; I figured standard muffins were too big). Because Christine of Muffin Top added extra pumpkin I figured I could too, so I added whatever was left in the last can I opened. I made these late at night, and, well, I could not possibly tell you how much pumpkin or spices I put in them. I know they did not get much ginger because I was out and so I used more cinnamon and cloves to compensate. So I am sending you over to Muffin Top so you can look at that recipe. A seriously quintessential, seriously simple and seriously delicious pumpkin muffin.