You are here: Home / apples / Algerian Tagine Of Chicken and Apples 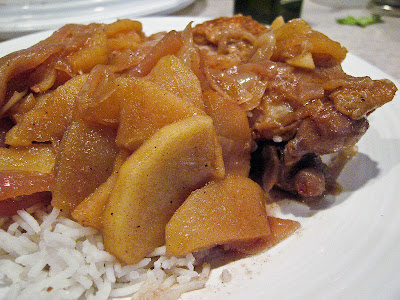 I had trouble with the color of this dish–the flavor was a lot richer and more vibrant than the pictures imply. Perhaps it would have been prettier with quince, the first choice of the recipe author (Joyce Goldstein), but I figured why hunt down a flown-in quince when I still have local apples? (And truthfully here is where I confess I have no idea what a quince even looks like.) Goldstein also recommended using pomegranate molasses to intensify the color, but I did not have any. 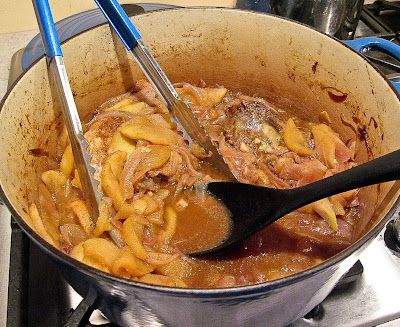 This tagine recipe (cooked in a Dutch oven) was taken from Saffron Shores: Jewish Cooking of the Southern Mediterranean

, by Joyce Goldstein, a book my sister bought for me. Those of us who grew up with mainly Ashkenazi Jewish friends (Jews from Eastern Europe) in the post-Israel world especially forget how much Jewish culture influenced the food in North Africa. (I mention Israel because as far as I can tell after the creation of Israel the vast majority of those Jews left North Africa and moved to Israel, although active Jewish communities remain, especially in Moroccco.) If you mostly think of potato pancakes, mandelbrot and matzo ball soup when you think of Jewish food, then this book will be a pleasant surprise (not because that other food is not wonderful but just because it is amazing how much more is out there). This tagine made with quinces in Algeria is regarded as ideal Rosh Hashanah food, but I call it ideal winter food anytime and have made it with the last of this year’s Fuji apples. 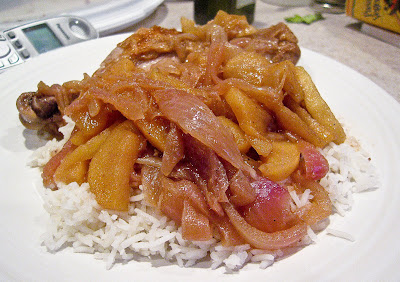 Algerian Tagine Of Chicken and Apples

Affiliate links were used in this post, but only to link to items I would be discussing and linking to anyway.