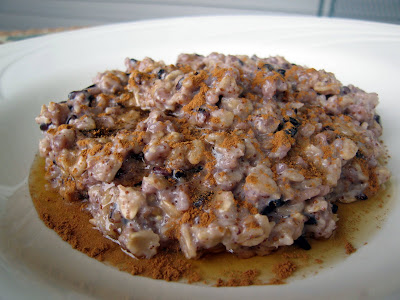 This “recipe” has been quite the source of consternation for me. On the one hand, I want to share this recipe/method with the world. Yes it may seem obvious, yes many of you may already know how to do it, but I only just figured it out and I consider myself a decently experienced cook. So some of you may not too. But I just could not figure out how to photograph it.

Anyway, the background: I have never enjoyed oatmeal much because I just find it way too mushy/soft/wet, even when made with old fashioned rolled oats. A year and a half ago, I experimented with making a mixed grain oatmeal in my rice cooker (I would leave it out dry and John would start it before leaving in the morning so we would wake up to oatmeal), and we loved it. Full of chewy pearl barley, sweet black rice and wheat berries (in addition to the oats), it was a decidedly not mushy healthy breakfast. Alex especially loved it.

Then our rice cooker broke. Every now and then she would see it sitting on the ground and walk by quite sadly, pointing at it and saying “No more oap-en-meal?” (she was 2 at the time). Sigh. No more oap-en-meal. Whenever I tried to make it in advance, it dried out. When I tried to make it in the slow cooker, it became a glutinous mass. Given some of the grains involved, making from scratch each morning was not an option. I finally gave up. 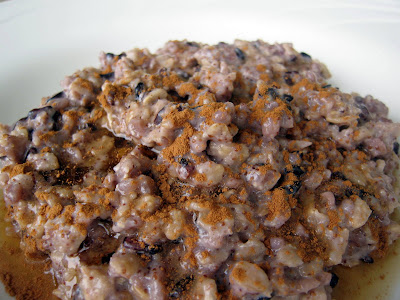 Recently I acquired Mollie Katzen’s The Sunlight Cafe, a cookbook focusing on ways to get a more nutritious, filling breakfast into our bodies. Something I have been concerned about as preschool looms and the end of our late mornings approaches. Meaning breakfasts need to be bigger, more sustaining. She suggests cooking the grains separately and re-heating them, which gave me an idea… So this past Sunday I decided to cook the following grains separately:

I added some brown sugar and vanilla to the oats while they were hot, and then mixed all of the grains together. The next morning, I made old fashioned rolled oats oatmeal–which according Katzen would take 5 minutes to cook (for some reason I had always thought longer). I made the oats in milk (the rest of the grains were made in water), and when they were a minute or 2 from being done, I added several large spoonfuls of the much drier and chewier whole grain mix from the previous day. This allowed the grains to soften and warm up without drying out. It was fabulous! Such a simple, but morning-altering discovery! Drizzled with some maple syrup and sprinkled with cinnamon, this breakfast will definitely make the regular rotation. Below are the cooking times and ratios for the grains that I used, but I am sure we will try others in the future. 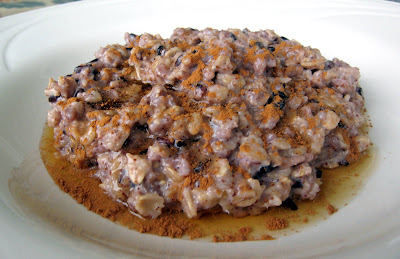 This was not so chewy and turned into a glue that held everything together. Plus I just love the flavor of teff. Use ratio of 1/2 cup seeds to 1 1/2 cups water and cook for 20 minutes or so on a simmer, until soft.

Cook 1/2 cup of rice in 1 cup of water and drain off excess water when done. Will cook for about 35-45 minutes, until tender but chewy–will have a pleasant pop to it. And will be gloriously purple/black.

I was so happy with the others that I might leave this one out next time; in the past I had thought it necessary for chewiness. Use 1/2 cup of the barley to 1 1/4 cups of water and simmer for 70-90 minutes, until tender but chewy.

Use 1/2 cup of the oats to 1 3/4 cups of water. Bring the water to a boil and slowly drop the oats into the water so that it does not stop boiling. Boil for 10-15 minutes, until done to desired tenderness. This will be the wettest grain, so add the others into it and mix. 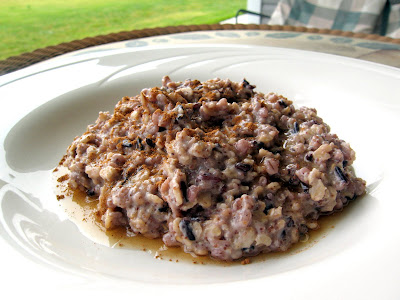 Bring the oats and milk to a boil. Reduce to a simmer and simmer for 4 minutes, stirring occasionally. Add the salt, brown sugar (start with less), vanilla, a pinch of cinnamon, the oat bran and the wheat germ. Stir and simmer another minute or 2. Add the previous day’s whole grain mix and stir, breaking up the clumps of the whole grains. When it is smooth and heated through, taste for sweetness and cinnamon, accounting for serving with a drizzle of maple syrup and sprinkling of cinnamon.