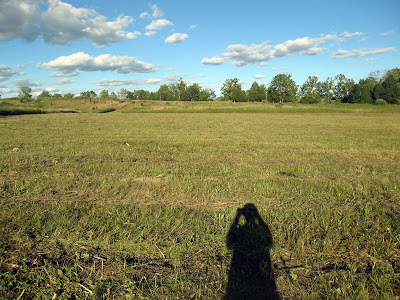 The next week or 2 I will be posting less regularly than usual. I am headed to Columbus for a couple of days and then early next week I am having my deviated septum corrected (YEA!). I am sure many of you have noticed by now I have been sick more often than not. More often than my toddlers, as a matter of fact. Well I am hoping to fix that with any luck next week. Throw into the mix the fact that we finally closed on our property (that’s me, on the left, taking photos at the property–we are trying to document what it looks like at each stage–this stage was right after about half of it was bush wacked) so I have been busy with some house stuff, and I have not been baking as much as usual. 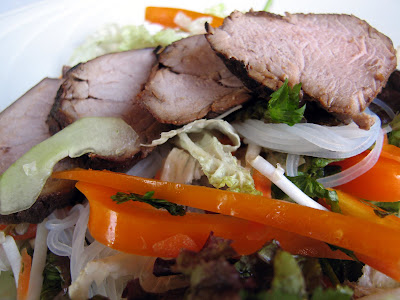 So while I normally would have an original recipe for you, I am instead going to recycle one since it is what we have eaten the last 2 nights. It is well worth recycling–think of me as the missionary of bun dishes–plus I have gathered more readers and improved my photography since the first time I posted about bun, so maybe you have not heard of bun or maybe you were not tempted by my earlier photos. So in the interest of convincing all of you to try this incredible dish, I am sharing it again. 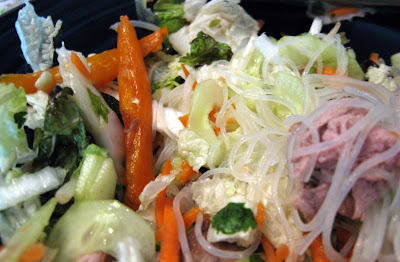 For this dish I used a pork tenderloin (my personal favorite) that had been marinated in a neutral oil, superior dark soy sauce, fish sauce, garlic and sugar for a few hours. Lemongrass would be a fantastic addition as well, but I am saving mine for green curry this weekend. I seared and roasted the pork, and then sliced it over the bed of rice vermicelli and veggies. For a greater discussion of what goes into a Vietnamese bun dish, check out this post. 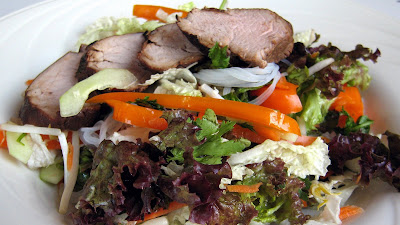 This picture is my younger daughter, reaching in while I tried to photograph the dish, yelling “BITE! BITE!!” My kids love Vietnamese bun, including the nuoc cham dressing (fish sauce, lime juice, sugar and garlic). 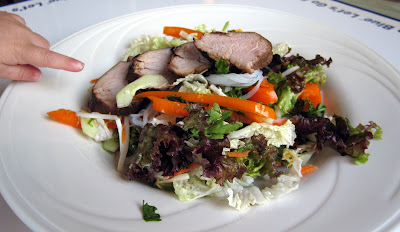 For dessert I served a blackberry crisp. I used this basic crisp recipe as a guideline, but increased the oats (just because) and the sugar (because the blackberries are tarter). I also used lime juice instead of lemon. 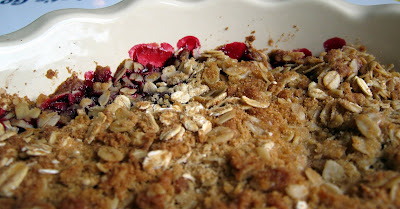