That’s a bit of a mouthful! But I found the recipe on HoneyB’s blog–but she in turn found it on another site, posted by Brooke, apparently. 🙂

Anyhoo, in a fit of deviated septum induced madness I signed up for Taste and Create this month. I don’t know *what* I was thinking–since we do not get the partner list til around the 11th, at which point I was out of town and then immediately upon returning scheduled to have surgery 5 days before the posting deadline. Nice going, Laura!

So I chose and rejected quite a few recipes from my partner blog, The Life And Loves Of Grumpy’s Honeybunch. None of the rejections were any reflection on the recipes themselves, so much as my time kept shrinking and shrinking. HoneyB’s blog is chock full of great recipes and, just as important, very entertaining. Finally today, since I wanted to make some baked good before heading off to the hospital tomorrow morning (compulsive, I know, but it just makes me feel better), I decided that if HoneyB had a brownie recipe I was making it, no Ifs, Ands, or Buts. 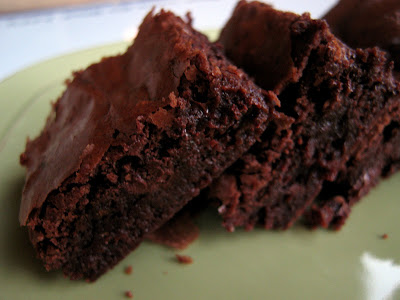 I’m actually really glad this happened, because I always avoid brownie recipes made only with cocoa powder. And now I know what a fool I have been. 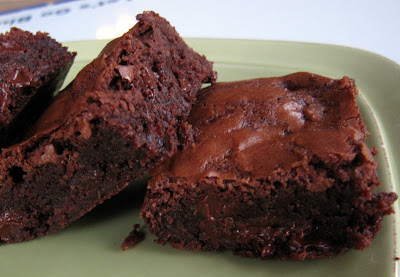 Brooke’s Best Bombshell Brownies really are the bomb–as HoneyB observes also. They are moist and chewy, and the addition of chocolate chips gives you that cocoa butter taste to go with all the cocoa powder. I am not going to lie–because of my aversion to many cocoa powders, I would only use one you really love here. I used my standby, natural Scharffen Berger. If you are one of those people who falls hard onto one end or the other of the fudgy/cakey spectrum, I would say maybe these would not be your thing. If, on the other hand, like me, you just want them chewy, not fudgy or cakey, these are pretty darn near perfect. The only change I made was to use an additional 1/4 cup of chocolate chips, for a total of 3/4 cup (I cut the recipe in half and used an 8X8 pan).

« Pico De Gallo Made with 4 Colors of Tomatoes
The Aroma Of…? Mancatcher Cocoa Brownies »