Affiliate links are used in this post to link to items I am discussing. 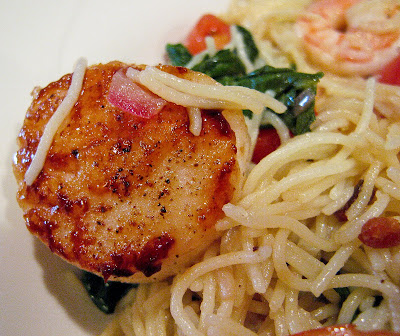 A few years back my brother Chris went on one of his hunting trips in Louisiana and he brought back some books for my sister and me. I think he was late on our birthdays. At any rate, while I loved what he brought me, I confess I was full of burning envy for what he brought my sister. It’s not his fault; I doubt he even knew that when John and I went to New Orleans (what seems like eons ago) Bayona Restaurant was our big splurge, after endless research into all of New Orlean’s fine dining establishments (we went to other wonderful places as well, but none quite so pricey). But ever since browsing my sister’s copy of Bayona owner/chef Susan Spicer’s Crescent City Cooking

, I have been wanting it, searching in used bookstores for it.

And this past week, with a coupon no less, I finally struck gold. 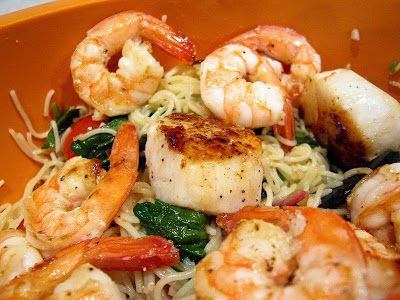 I love this book. Despite the restaurant nature of many of the dishes, only a few seem unapproachable for the home cook. And some, like the appetizer that inspired this dish, are easy enough and flexible enough that I can turn them into dinner, since I have no need of appetizers in my nightly rotation. This pasta dish was based on a scallop dish that looked so amazing I thought why not serve it on noodles and call it a meal? And then, because shrimp is so much more economical than scallops, why not use both types of seafood and bulk it up that way as well? 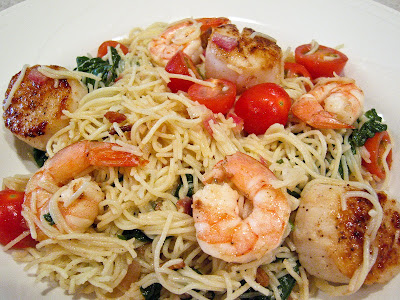 And it worked. Oh my did it work. I usually am restrained when it comes to pasta, but not this dish. John and I both ate more than we should have, to put it bluntly. And I refuse to regret a morsel. 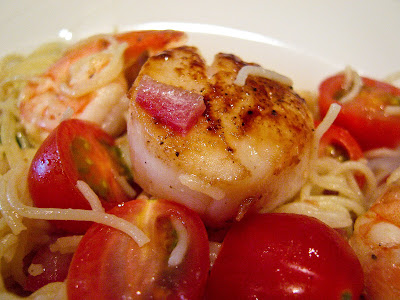 Fry the bacon preferably in a nonstick skillet over medium heat. While it is cooking, pat dry the seafood and sprinkle one side with a little salt and pepper. When the bacon is crisp and all of the fat has rendered, remove the bacon with a slotted spoon and set aside. Carefully pour the bacon grease into a small bowl. Set aside.

Return the pan to the heat, only this time heat it on high. When the remaining bacon grease starts to smoke, add 1 tablespoon of the olive oil and the shrimp. Saute until opaque, pink and curled. Remove the shrimp to a platter and loosely cover with foil. Return the pan to the heat and add the remaining olive oil when it starts to smoke. Add the scallops, placing them seasoned side down. Fry until they are golden brown and turning opaque at the bottom, 2-3 minutes. Turn them over and cook the other side for 1 minute. Remove the scallops to the platter with the shrimp and re-cover loosely with foil. Wipe any scorched bits out of the pan.

Return the pan to medium heat. Dump the spinach into the pan with half of the garlic and a pinch of salt. Cook, tossing with tongs (be sure not to use metal tongs on your nonstick pan), until the spinach is wilted but still bright green. Drizzle with 1 tablespoon of the sherry vinegar and toss. Remove the spinach, using tongs, to a large serving bowl. Shake it out a little as you go. Pour off the remaining liquid in the pan into the sink.

Return the pan to medium heat (if it seems too cleaned out, i.e., too dry, drizzle a little olive into it). Add the remaining garlic and onion (or shallot). Cook for 5 minutes, stirring. When it is translucent and starting to brown, add the 1/4 cup sherry vinegar. Bring to a boil and let it simmer rapidly for 2 minutes. Then add 1 tablespoon of the reserved bacon grease and the butter. Whisk it smooth, adding the honey as well, and then turn the heat off. Salt and pepper it to taste.

In the large bowl (that should already have the spinach), toss the pasta, spinach, bacon, tomatoes and the vinegar sauce. Toss each individual serving with shrimp and scallops. Sprinkle with smoked sat if desired. 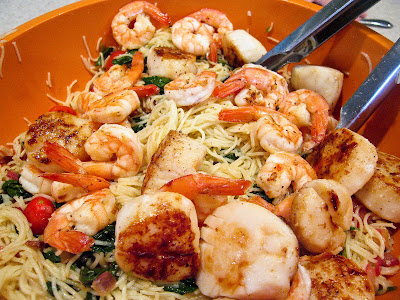