You are here: Home / family recipes / Round Up for Grandma’s Recipes Event

Wow the time went so fast. I worried no one would participate in my first blogging event, but they did. And they are great entries. If, like me, food for you is tied up in memories, family and emotion, then you will really appreciate these dishes and the stories that accompany them. I urge you to check out every single post–although I warn you that 2 of them made me tear up. 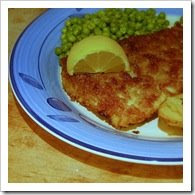 Suzi of Springtime remembers her grandmother’s special Cornflake-Crusted Fish and Chips with pleasure–in fact she loved them so much it was the only dish to come to mind when she thought about her grandma’s cooking even though she knew she had enjoyed other dishes. 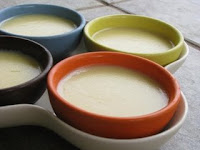 Vicki, of A Work In Progress, remembers a lot of her long-lived grandmother’s dishes fondly, but none so much as her Grandma’s Custard. 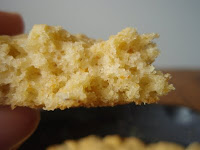 Grace, of A Southern Grace, shares the cornbread that her grandma made for her grandpa’s lunch every single day. That’s serious cornbread devotion–and this must be one special cornbread. She does warn us (and the Yankee in me appreciates it, I admit without shame, since when I bite in expecting sweet and get savory I am always disconcerted) that this is true Southern cornbread–none of that Yankiefied sweet stuff. Cast iron pan non-negotiable. Check out Frannie’s Cornbread. 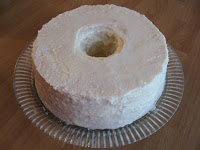 Haley, of Appoggiatura, sends us the first cake she has ever made for her blog (hey Haley–I cannot decorate cakes either!)–and announces her engagement! Congratulations, Haley! Check out her Grandma’s Pound Cake, complete with icing! 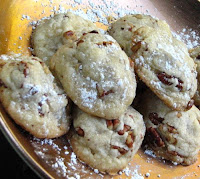 Allison, of Local Lemons, enjoys foodie life in Berkley (who wouldn’t?), away from her family in NYC–except she cannot get good Italian food or her grandmother’s cooking. Luckily her grandma is a phone call away, and gave her the recipe for these Grandma’s Toasted Butter Pecan Cookies, which Allison was surprised to discover have no egg or leavener. Hey that sounds like shortbread or one of its crumbly cousins to me, so I am definitely checking these out. 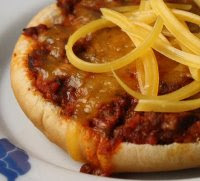 Tracy, of Rah Cha Chow, recently lost her grandma and made her famous pizza burgers–a kid-oriented specialty she made for her 20 grandchildren! Actually Tracy did not even know of this event–I contacted her after reading her post. It would seem there are a lot of us for whom family memories and food are inextricably intertwined. 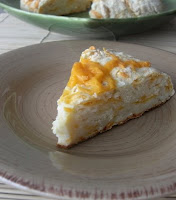 Bellini, of More Than Burnt Toast, shares the recipe for her family’s Potato Bread–which she describes as being closer to a potato scone. I am intrigued! The specific recipe she uses comes from her mother, also a grandmother, but she is sure her grandmother made a similar bread. 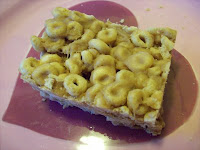 OK I am loving these recipes which include romantic grandpa stories! First we had Grace’s grandma who made cornbread for her husband every single lunch their entire marriage. And now we have Mary, of Shazam In The Kitchen, who found this recipe for Cheerio Bars, in her grandma’s recipe binder–with a short, sweet love note from her grandpa! I love it! 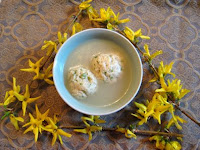 Tinky, of In Our Grandmothers’ Kitchens, blogged about her paternal grandmother’s Matzo Ball Soup. Her grandma made the soup every year for Passover, despite not being much into cooking. Her grandma and one of my paternal great grandmas arrived from Poland to the United States around the same time. Her grandma was possibly a spy or smuggler though!

Robert, of Robert’s Random Writings, was blessed with 2 grandmother supercooks–but only one who would share recipes! So he has shared with us his Grandma Simpson’s French Cream–a yum sounding dessert if I do say so! 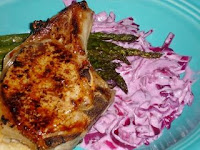 Josie, my sister, of 1 Kitchen, 2 Dogs and a Girl, wrote about our grandma’s Sour Cream Cabbage. I know this was a tough post for her, so I really appreciated her participation–I might have bullied her a little in my fear that no one would participate. But she wrote a lovely post which brought tears to my eyes. Thanks, Josie. 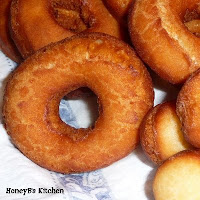 When HoneyB of The Life And Loves Of Grumpy’s HoneyBunch sent in her recipe part of me was expecting it–after all her grandma inspired her blog. Part of me wanted to yell what are you doing you just had surgery???!! But then I realized she was sending in her Nanny’s Raised Doughnuts, and frankly I was perfectly happy she found the energy to make them from that point on! Picking just one photo was impossible–she has sugar dusted holes, iced doughnuts, and then one I picked, just glorious straight from the oil. Those babies are headed for my deep fryer as soon as I get the chance! 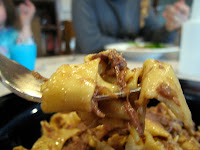 And last but not least, we have my own submission, my Grandma’s Beef & Noodles. Much like Josie, food is an integral way of how I remember my grandma, and learning to make these beef and noodles was kind of like having her in the kitchen beside me.

Please let me know if I left you off. I have a new email account which is behaving better than my old one, but I still know these things can sometimes get lost in the ether, or so it seems.