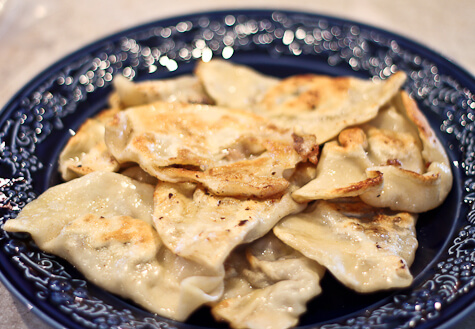 Remember last fall when my brother and I made his famous Fist Sized Meatballs? We had so much fun that we had been talking about finding something else to cook. Recently Chris called, and said how about pierogi? 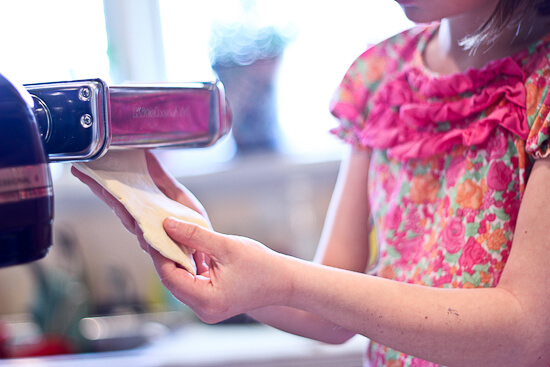 Now I don’t adore pierogi, but I like them, and because I am 25% Polish it still seemed like a fun experience that I should try at least once. Well…. fun yes but holy wow so much work. Probably only to be attempted by people who really love pierogi. My brother took our results home to my sister, who does adore pierogi, and she devoured them all instantly, proclaiming them, and I quote, “AWESOME” (it was over text). So I am pretty sure we did it right and I am just as sure I won’t be attempting it again any time soon. But for your reading pleasure, I present our pierogi making adventure…. 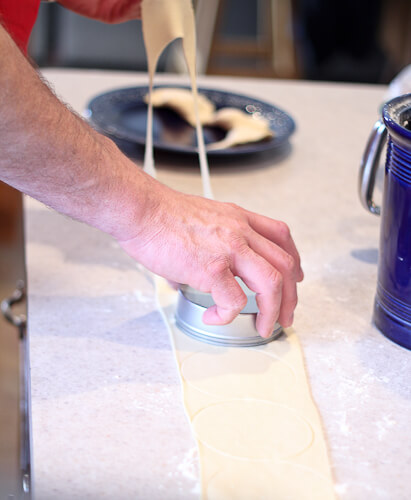 We decided (maybe this was our first mistake?) that as long as we were making pierogi, we were going to triple the recipe and then try making several different kinds of fillings. We knew one would be potato (I will be telling you more about that one in an upcoming post), we decided to make one dessert pierogi (stay tuned for that one as well), and then we decided to play with different meat fillings. We totaled out at 4(!), 3 of which were a success and one of which, our single attempt at fusion pierogi with a chorizo filling, very much did not work. I think mushroom would make another fantastic filling, but my brother hates mushrooms, so…. 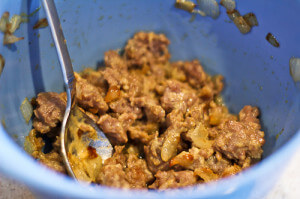 The simplest filling we made, and my brother’s favorite, was bratwurst and onion, chopped and sautéed together. When the onions were browned and the bratwurst cooked, I mixed in a dollop of Dijon mustard. That’s it, super simple and super tasty (another thing I learned while making pierogi is that I do adore pierogi fillings, just not so much the pasta). 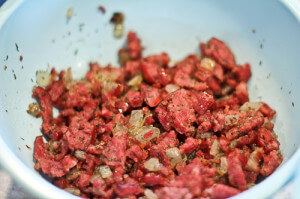 The next meat filling is also pretty simple. We sautéed onions (almost all the fillings started with onions) and then added diced kielbasa. It was plenty tasty as was, but I decided to add some dill to jazz it up a bit. All I had was dried dill–I would be very curious to try this again (the filling, in some other use, like a shepherd’s pie or something) with fresh dill. The filling was good, but it did not have as much wow factor as I would have liked. 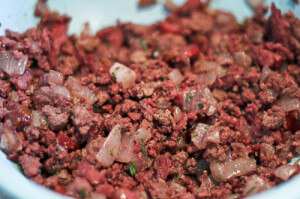 This last filling was my favorite, and the one I am most proud of. It was so delicious, I am determined to try it again as the filling in a shepherd’s pie. We started with onions and ground beef, to which I added a small amount of diced kielbasa, red wine and thinly sliced dates. At this point it was super tasty. Then, at the end and on a whim, I added minced fresh rosemary from the plant on my windowsill. WOW. I found my wow factor. 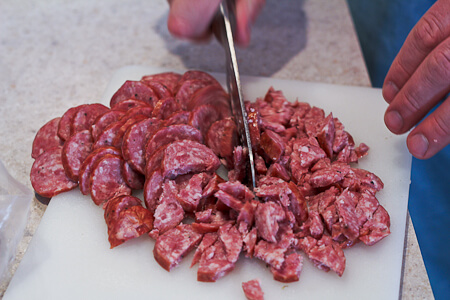 I realize this has been an oddly lukewarm post, because what I learned about pierogi is that I don’t love them enough for the work. But if you do love them, I cannot emphasize enough how much fun it is to make the filling. Mostly because anything goes, and if it sounds good it is worth trying. Just remember that the flavor should be strong enough to stand up to the pasta and, even if, like the chorizo, it does not work, it will not be the worst thing ever.

I found the recipe for the basic pierogi dough in Anne Applebaum’s From a Polish Country House Kitchen: 90 Recipes for the Ultimate Comfort Food. (It is a gorgeous cookbook–I highly recommend checking it out). While

I did not change the ingredients, I completely changed the method. The cookbook remains true to a very traditional, hands on method of kneading and rolling out the pierogi. I hate rolling out. I just could not make myself do it. So if you have a mixer, and especially if you have a pasta roller, my instructions have been updated for using that equipment. 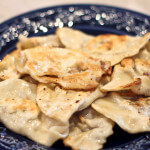