You are here: Home / butternut squash / Eating With The Seasons: Smoky Squash Bisque 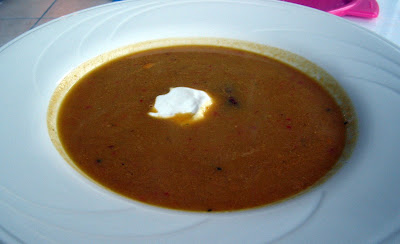 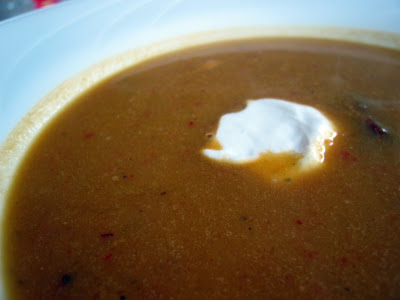 Anyway, this is the chipotle bisque. It was originally a recipe I got from the CLBB but has gone through so many changes it no longer bears any real resemblance to that recipe. It could probably be made with canned pumpkin, but I have only tried fresh butternut squash, and then this pumpkin I used for this soup. I made it with a variety of pumpkin that I have already forgotten the name of–but which the local market owner assured me was supposed to be one of the best eating squashes out there. Its shape definitely presented me with a bit of a challenge; finally I decided to slice it in half (no mean feat) and then roast each half until tender. That part worked beautifully–the shell stayed pretty firm which meant it was much easier to scrape the flesh out than, say, a butternut squash. 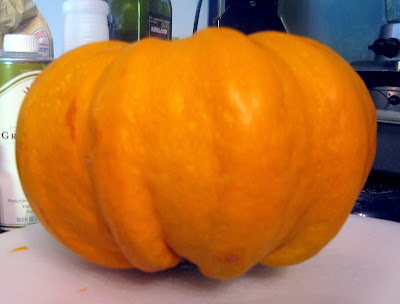 The pumpkin was about 3 1/2 pounds, with very defined ridges and thick skin which was difficult to cut. 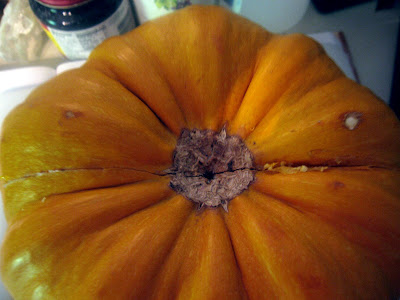 Here I managed to get it started–it took about a full 5 minutes to cut the thing. 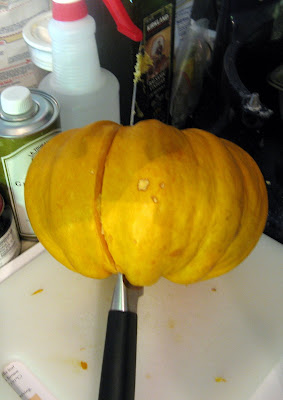 Here the knife is stuck in the pumpkin and I was cursing–but about 30 seconds later it finally cracked open. Eureka!

The soup was fantastic–as always. I don’t know if the pumpkin was better than butternut squash, but it was as least as good as, and it was something new and different that you cannot find in a grocery store, so I kept the seeds to plant in my garden next year. I served it with a whole grain bread and a simple autumn salad of local greens, goat cheese, and sliced local Fuji apples with a homemade balsamic vinaigrette. Yum. 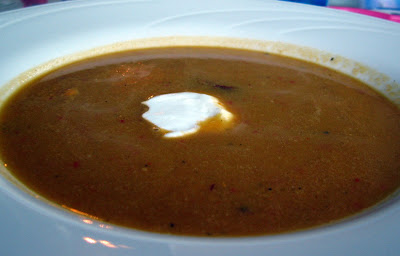 *For an extra smoky flavor, add more chipotle, or, if you cannot take the heat (as my kids cannot), supplement it with some smoked Spanish paprika.

Peel, seed and cube squash. Or roast as I have directed above if that is easier.

Heat butter and oil in a large saucepan over medium heat. Add onion and saute for 10 minute, until translucent. Add the garlic, peppers and carrot and cook for 5 minutes, stirring occasionally. Add squash, stock, oregano and chipotle chile. Bring to a boil; reduce heat and partially cover. Simmer 20 to 25 minutes, stirring occasionally, or until vegetables are soft. If you roasted your squash this will take much less time as the squash is already cooked but will still need 10 minutes or so to assimilate flavors.

Using an immersion blender, puree until smooth (you can also puree in batches in a food processor or blender). Add the whipping cream and stir in. Taste and, if needed, add more salt and/or brown sugar. When ready to serve, heat soup until hot. Ladle into bowls; top each serving with a dollop of sour cream, squirt of lime and extra chipotle if they like it spicy.

« Can You Have Too Many Variations On Desserts That You Love?: Peanut Butter Chocolate Chip Cookies
Worth The Wait: An Angry Asian’s Grandmother’s Shumai Meatballs »