The Spiced Life Café de Leche Cheesecake is a combination of classic flavors in a creamy, indulgent cheesecake. My mother begs for this dessert regularly. 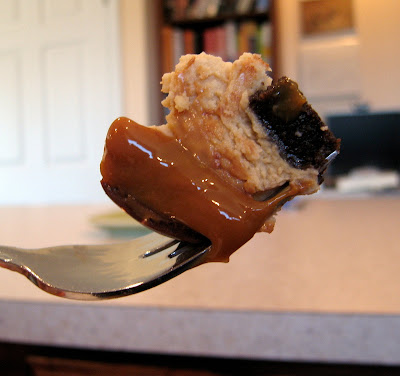 “This is the best cheesecake I have ever had.”

I almost keeled over when those words came out of my mother’s mouth. I was pretty sure up until that point that I, with the Daring Bakers’ help, had created something pretty darn special. But when my mom, longtime veteran cheesecake maker, uttered those 9 words, followed by a confession that it was better than anything she had ever made, I felt like I had struck gold. 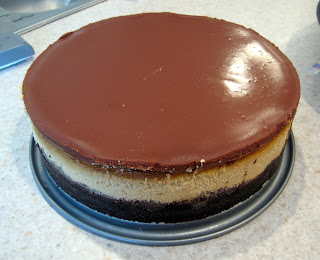 It might be the best compliment I have ever received. 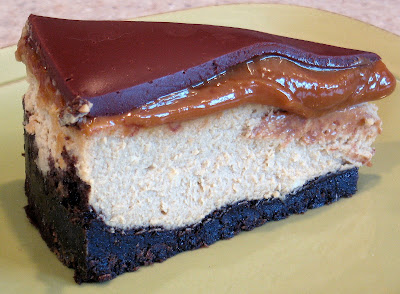 The April 2009 challenge is hosted by Jenny from Jenny Bakes. She has chosen Abbey’s Infamous Cheesecake as the challenge. That’s Jenny Bakes, by the way–I have no idea if I will get credit for the completed challenge if I try to include the link in the magic sentences! 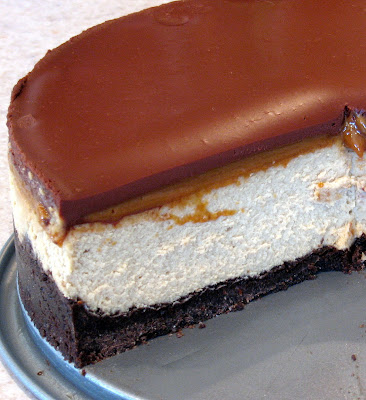 Anyway, this month’s Daring Bakers challenge was fabulous-one of my favorites ever (ok so I have not completed a huge number). But still. I loved it because it took something impressive but not hideously difficult that I wish I did better–cheesecake–and then required that we make a basic cheesecake creative on our own. I fiddle as a cook all the time, but fiddling as a baker is something I don’t always do so comfortably. So this was a great challenge on many levels. 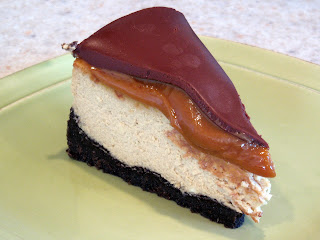 I was not going for stunningly creative or unique with this cheesecake; I am a relatively simple person when it comes to desserts and I have relatively simply tastes. I am always sad at restaurants when desserts have too much going on (raspberries with caramel and dark chocolate with a sponge layer and a mousse layer and… give me the plain mousse over that any time). So since I believe in making desserts that I will want to eat, I knew that I would choose classic flavor combos that I tend to love, rather than some of the more interesting (and I mean that in a complimentary way) ones that I have seen. They look gorgeous, but are not what I would want to eat most. 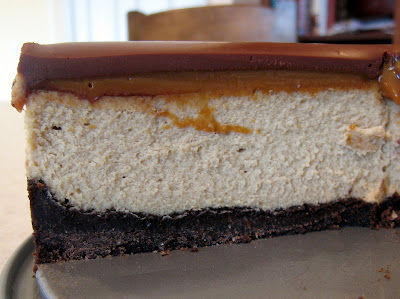 When I think cheesecake the flavors that come to mind are: vanilla, chocolate, coffee and lemon. The lemon clearly does not work with the others–at least for me–and I had just made that goat cheese lemon cheesecake, so I nixed lemon. I also nixed vanilla because to really hi-light vanilla it needs to be the only flavor (as opposed to using a bit of extract) and I thought that was too boring for this assignment. That left coffee and chocolate. My husband does not like a really strong coffee flavor (my loss and one of his few flaws as my usually appreciative audience), so after thinking about what I could do to tame it and remembering how much I loved Turtle Cheesecake when I was a kid, I decided to try adding some sort of caramel to the mix. I had some imported Argentinean dulce de leche in my pantry (yes I made this challenge entirely from the pantry as well!) and decided to use it. I also found some chocolate graham crackers for the crust, Sharffenberger chocolate and cream for a ganache layer, and I made up my mind to do layers with the dulce de leche and ganache. In retrospect, I think the ganache had a little too much cream as it was a bit soft. Next time I would use less. But this was just a cosmetic criticism–from a flavor perspective this cheesecake was a winner. 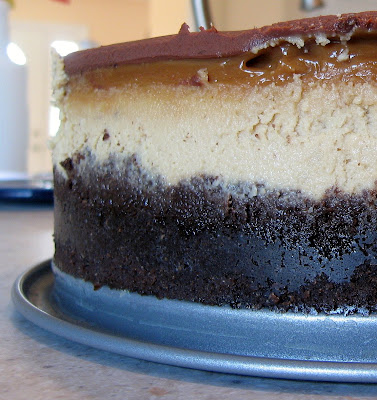 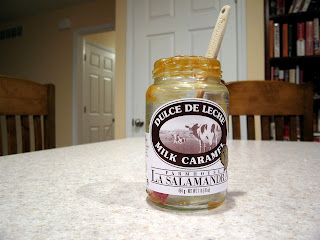