You are here: Home / beef chuck / Braised Beef with Butternut Squash, Sweet Potatoes and Dried Cherries & A Kitchen In Progress 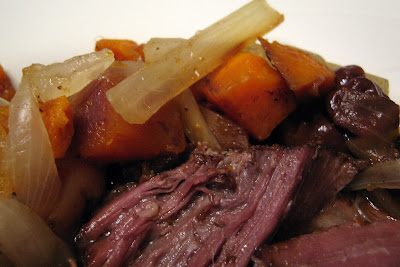 I bet you guys wondered what on earth happened to the house pics.  What happened was I got a new camera phone–and became so enamored with it I stopped taking my camera out to the property.  In the meantime it took me forever to figure out how to upload the pictures taken with the phone.  The phone of course will not replace our camera–it is 3.5 megapixels versus the 8 of our camera.  But it does take very nice pictures for a phone and the mom in me LOVES it since I can grab those shots now that you always wish you had a camera with you for.
So if you are reading this blog you must like food, ergo you are probably most interested in the kitchen.  Here are 2 decent shots (taken with the phone) of how it looked the last time I was over there. 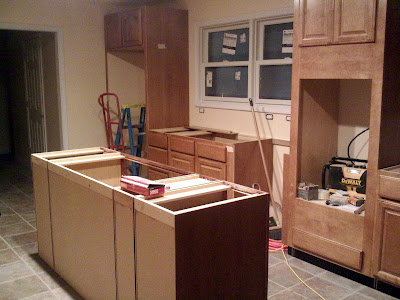 This shot is from the entrance from the front hall.  To the right, beyond the scope of the camera, is a peninsula and the family room (or the rest of one great room, however you want to think of it).  To the left, also outside the camera’s view, is a desk flanked by floor-to-ceiling bookshelves and a microwave cabinet.  But this is a good shot of the look of the kitchen. 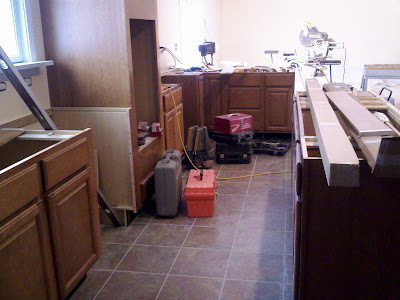 This shot is from the laundry/pantry hallway that goes to the garage.  It shows basically the same stuff but looking down the cooking area.  The desk, off to the right, is not included in these pictures because it was blocked by some very large boxes.  You can somewhat tell in this shot that the wood in the island and the wood in the main wall cabinetry is different–the island and the desk/bookshelves are a darker wood, stained “chestnut,” where the maple of the wall cabinetry is lighter, stained “praline” (I love the darker finish, but I was afraid the kitchen would be too dark–plus I wanted my kitchen to look a little more eclectic, a little less perfectly put together).
Anyway, about the pot roast. 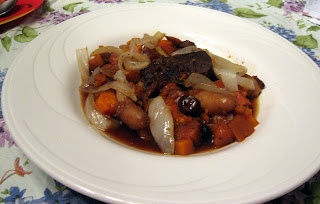 I first made this dish, as a brisket, when I was about 8 months pregnant with Sam.  It was Alex’s first exposure to braised beef and she devoured it.We always add extra potatoes and onions to any braised dish–we often feel like the traditional recipes are too meat heavy and then everyone, in my family at least, fights over the potatoes and onions.  Feel free to adjust to your preference.  I also believe strongly in a much lower and slower braise than many cooks will tell you.  I like my meat to be absolutely falling apart. 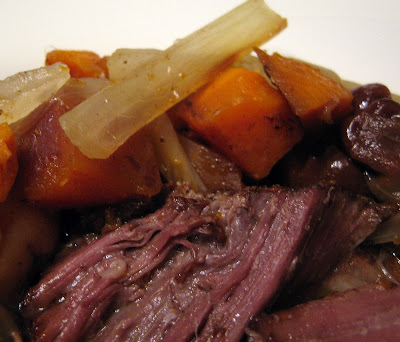 You will notice in my picture that the sweet potatoes and butternut squash are cubed–I decided after that I would have preferred them to be larger, to mimic the size of the fingerling potatoes.  If you like the potatoes cubed, I would add them later than what I call for as they were starting to fall apart by the time the onions were cooked. 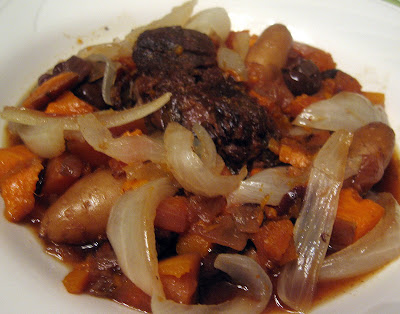 2-3 slices 2 slices thick bacon, chopped
1 (3-pound) beef chuck, preferably with bone (brisket could be subbed as well)
salt and pepper to taste
1 large onion, chopped
3 medium onions, thinly sliced
1 cup Madeira (I have successfully used Merlot and port as well)
1 (14-ounce) can fat-free, less-sodium beef broth
6-8 garlic cloves, chopped
1 bay leaf
1 small butternut squash, peeled and cut into large pieces
1 large yam/orange sweet potato, skin left on, cut into large slices
15 fingerling potatoes
1 cup dried cherries
About 5 hours before dinner, preheat oven to 250 F.  Heat oil in a large Dutch oven over medium-high heat. Add the chopped bacon and cook until crisp and fat has rendered.  Remove the bacon with a slotted spoon, leaving behind the fat.  Sprinkle the beef with salt and pepper. Add the chuck to the pan; cook 5-10 minutes, turning to brown on all sides. Remove from pan. Add the chopped onion to pan; sauté 8 minutes or until browned.  Add the garlic.
Deglaze the pan with the Madeira.  Add the beef stock and the chuck, including any juices.  Add the bay leaf.  Bring to a simmer.
Cover with parchment paper (place the paper near to the food, forcing the moisture closer to the beef, and let the sides of the paper hang over the pot) and then a heavy lid and put in the preheated oven.  At this point your timing is very flexible–if you need to be ready sooner try 275 F, later try 225 F.  3 hours before serving, add the potatoes, dried cherries and butternut squash.  Cook at 250 F.  1 hour before serving, add the sliced onion on top of the potatoes and beef, and bake an additional hour at 275 F.
« Espresso Chocolate Chip Mandelbrot For The Troops
Dreaming Of Mandelbrot & Making Brownie Biscotti »