You are here: Home / beef / Beef and Mushroom Pho

This Beef and Mushroom Pho is just what the doctor ordered: warming, hearty, flavorful and mild at the same time. 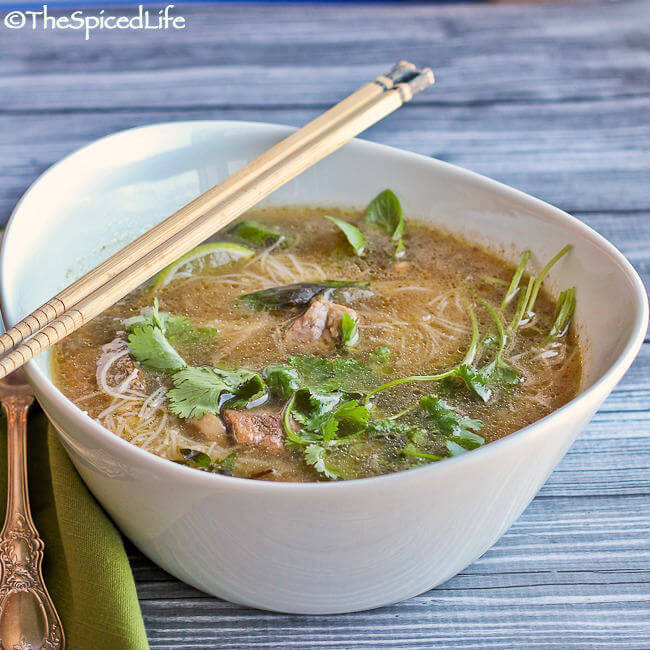 This is a cheater pho in some ways but not in others. I just want to get that out there. And because of that I am not going to give you a formal recipe, but I will tell you what I did. It was a process over a day or two. Here’s the deal: time was not my enemy when I made this, but leaving the house was.

I have not seen a season for germs this bad in quite a while. *I* have had worse years, but across the board everyone has been sick. My kids have each missed more school than any other fall, and even John got a horrible stomach bug over the Christmas break. At least it waited until after break to hit me.

So anyway, yes, sick as a dog and craving pho. And in the meantime John is teaching this super intensive class where they cram an entire semester into one 3 week course. So while he was helpful with the kids, I did not want to ask him to go to the grocery store for me. Plus we cannot get Thai basil or culantro in our local grocery store anyway. So let’s call this really delicious true to the spirit of the original but not entirely authentic pho. 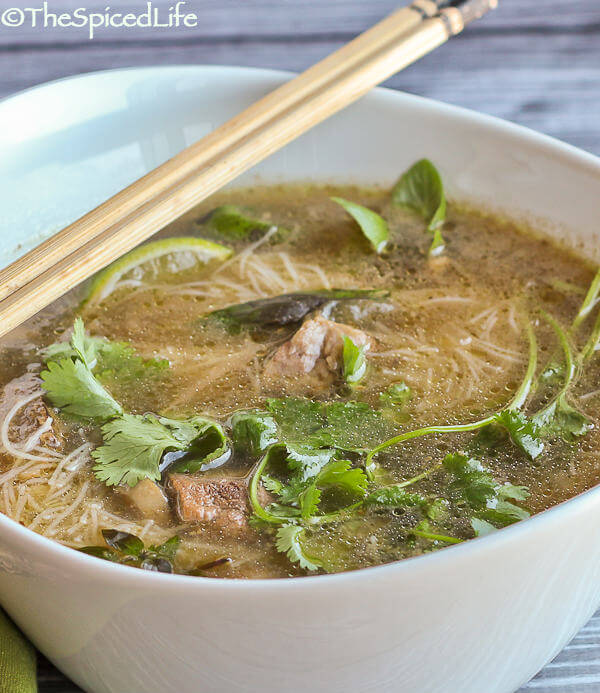 As some of you may have seen on Facebook late at night at the beginning of last week, basically I got optimistic and decided to start some beef stock. I had some soup bones in my freezer–I browned them and threw them in a giant stock pot with some peppercorns, coriander seeds and whole cloves–and water to cover by about 6 inches. I let that cook overnight, and then added some carrots and an onion or two and a garlic head cut in half. I let that cook the rest of the day.

I am going to pause right here and say 2 things about beef stock before going any further: first, commercial beef stock almost always sucks and while I am willing to use it in situations calling for a little stock, I am not willing to make a brothy beef soup with it. Second, most people do not cook their meat and bones long enough to make stock. It takes a while to suck all that goodness (marrow, gelatin, etc) out of those bones, especially thick meat bones! So even though I used the stock to make my pho after 24 hours of simmering, I also let it cook another 24 hours after that.If you are going to make stock for soup, do I what I did and make it separately. That way you can also make it in bigger quantities and freeze some. My freezer is now full of containers of homemade beef stock. 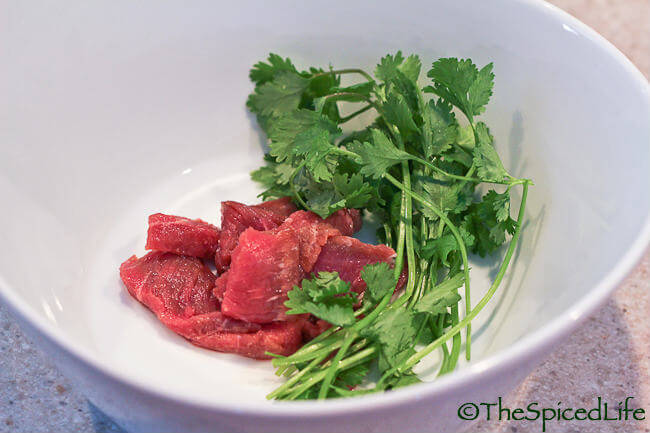 The night before I was planning to have the pho, I also took some brisket and round steak out of the freezer. The next morning, I carved the bone in the round steak out and added it to the stock. I placed the round steak back in the fridge. Then I cut the brisket into chunks and browned them. They got added to the slow cooker with some of the simmering beef stock and some whole star anise. That cooked all day while the stock also continued to cook all day.

About an hour before dinner I sautéed some onions, smashed garlic, rounds of sliced ginger and mushrooms, and then added 8-10 cups of the simmering beef stock to it. To this I also added some fish sauce. When the brisket was ready, I added its flavorful cooking liquid as well (reserving the brisket, which I did not want to get tough from boiling). I brought this to a rolling boil–you want it boiling because that boiling liquid is going to cook thinly sliced round steak placed in the bottom of each bowl. Once the steak cooked, I also added noodles and brisket chunks. 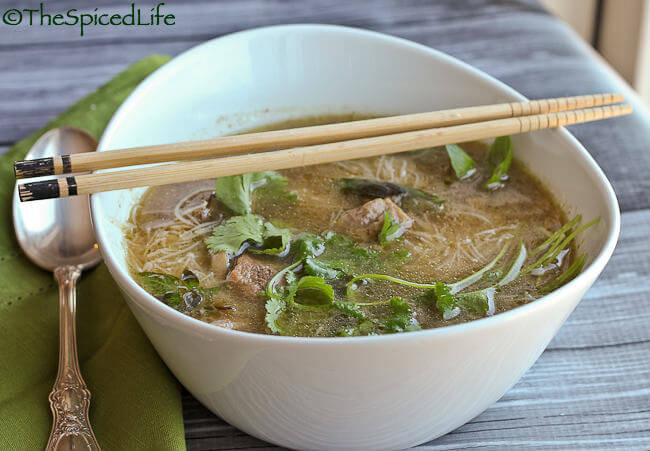 Most of you probably know that the key to really good pho is (in addition to good stock) the garnishes. Some I think you can get by without and some I think are non-negotiable. Non-negotiables include lime wedges; basil; cilantro or culantro–must have one of them; fish sauce; and for me personally nuoc cham. More on that in a minute, because I think it is unconventional. The negotiables? Sliced hot chili peppers; specifically Thai basil, bean sprouts; fresh mint; hoisin sauce; Sriracha sauce. We had most of these, even including some Thai basil from my window sill plant, but we did not have bean sprouts (was not worth a grocery trip for and I was afraid it might bother my stomach) or culantro and really we needed more Thai basil. We used rice vermicelli because that is what we had, but wider noodles are more traditional.

About the nuoc cham: I have never heard of anyone using nuoc cham in their pho, so I honestly have no idea what a Vietnamese person would think about it. I was at a pho shop 2 weeks ago, when I had the sudden idea to put Sammy’s nuoc cham that she got for her bun into my pho.

Guys this was sheer genius. I have never really “gotten” pho. Just like I don’t get chicken noodle soup. They just taste watery to me! And I promise you I have had excellent versions of both that everyone around me loved; this just seems to be a me problem. But if it is your problem too, try it with nuoc cham. The salty umami fish sauce with the sweet sugar and sour lime juice, really elevate the pho. For me anyway. I don’t want to knock on traditional pho–if you love it as is, great. But if not, try it!

OK I just re-read this post and it is a little rambly, and for that I apologize. I need to get back into the swing of things! 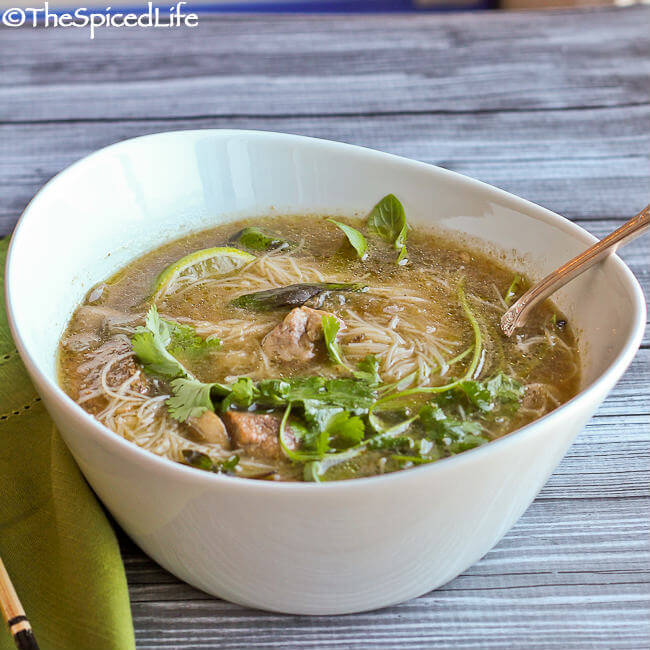