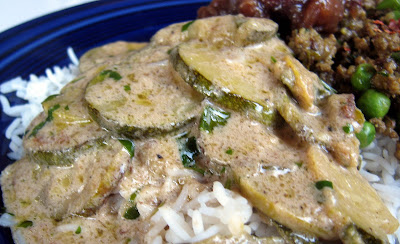 So as I was saying the other day, I finally got my copy of 660 Curries.I have an ok sized collection of Indian cookbooks—maybe 10 or so.I wish I had more.Shocking, right?But anyway, this book stands out (in my collection anyway) for one reason right off the bat.And that is his chapter on how to make curries in general, complete with discussions of the different flavors in a curry (bitter, sour, sweet, salty, hot, umami, astringent), with an even more in depth discussion of how to use spices in Indian cooking.

I have to admit I have always been lackadaisical about spices in Indian food—when it calls for whole spices roasted in oil, I will treat dry toasted ground spices the same, for example. Iyer claims that you can get at least 8 different (not just intensities) out of any one spice, depending on how it is cooked.For this reason, his recipes might call for whole spices roasted in the oil at the beginning of the dish and then added in again later, ground (as one example).I don’t know if I am a believer yet, but I am trying to be more careful about following recipes in this regard.In general I already feel more educated about Indian curries than I ever have before, despite having made different ones successfully in the past.

To complement the kheema I made the other night, and because it was a weekend so I had the time, I made Iyer’s Pan-Fried Bottle Gourd Slices with Yogurt and Aromatic Spices (Ghia Yakhani), only I used farmers’ market zucchini.Let me say from the start: this ain’t no diet food.My eyes kind of missed the word fried and focused on zucchini in yogurt.Well this is a rich dish, using at least 6 tablespoons of oil and another ¼ cup of heavy cream in addition to the full fat yogurt.And don’t try to lighten the dairy or it will curdle.So I doubt I will be making it again anytime soon.

But John really liked it.It complemented the kheema well, as it was more subtle with aromatic spices and rich with cooling dairy, in contrast to the spicy ground beef.It was not as much to my taste, but given how much he liked it I don’t think it was the recipe, I think it just wasn’t to my taste.I think subtle just is not my thing maybe.

One note about the asafetida: if you have been avoiding “nasty smelling resin” (asafetida) because of its odor, this is a great recipe to experiment with it.I have always used it, but mixed with other spices, so I was never sure what it truly did for the dish or if it just disappeared in to the general blend of spices.Because the asafetida is the only thing you can smell while this is first cooking, you can actually smell the transformation the raw, frankly disgusting spice undergoes as it cooks, taking on a yummy oniony-garlicky fragrance.It was really quite amazing.I guess I always trusted without entirely believing, since I have used it in the past.I believe now. Heat 2 tablespoons of oil in a large skillet on medium high heat.Arrange 1/3 of the summer squash ina single layer on the skillet.Sprinkle ¼ teaspoon fo the asafetida over them and 2 of the cloves as well.Cook until lightly browned and blistering, 3-5 minutes, and the flip, cooking another 3-5 minutes.Remove them and place them in a large bowl.Put 2 cups of water over them.Repeat with the remaining squash, only do not add any more water to the bowl.When you are finished, add the salt to the bowl and stir.

Return the squash and the salted soaking water to the same pan and bring to a boil.In the meantime, quickly whisk together the yogurt, cream, ground ginger and black pepper.Pour it over the boiling squash, and stir once or twice to blend it in.Because of the cream, it will not curdle.Continue boiling it vigorously, stirring occasionally, until the sauce thickens slightly, 15-20 minutes.

Stir in the cumin and cinnamon.Sprinkle with the cilantro leaves.Serve with basmati rice.

« A Kheema And A Chutney
Who Needs Structure When They Taste This Good?: Peanut Butter Chocolate Squares »