You are here: Home / bacon / Weeknight Cassoulet with Sausage & Bacon in the Slow Cooker

The slow cooker makes this Weeknight Cassoulet with Sausage, Bacon, Beans and White Wine delicious and easy. Affiliate links have been used to link to items I am discussing. 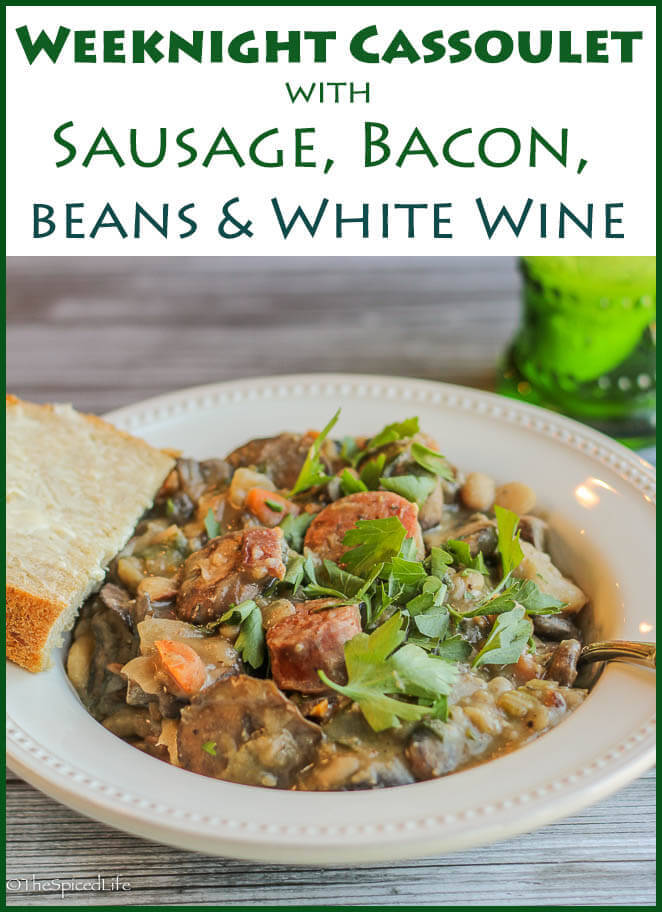 I know it is not exactly the time of year to be excited about stick to your ribs food, but frankly I could eat slow cooker bean dishes pretty much any time of year. And now that the sun is back (happiness!) I am back to running behind with dishes. In other words this is from all the way back when I had that week from hell and was cooking like crazy for the teachers! Heck you can–and should–pin it for next fall if you are pickier than I am about when to eat hearty slow cooker dishes.

I served this dish to the teachers without mushrooms, because I was afraid that maybe they were an ingredient that too many might not like (even if I think those people are crazy). But for us I added mushrooms–and people, if you like mushrooms, do not leave them out. They are outstanding in this dish, whether they are traditional or not.

, by Kim Laidlaw, which I picked up in Costco recently. What a find! We loved this dish, and we also loved a New Orleans style Red Beans and Sausage dish that I made from it (and also served to the teachers–my slow cooker got a workout that week!). The premise behind the book, which has a somewhat confusing title, is that they have streamlined the prep part of cooking in the slow cooker. I don’t know if I necessarily found that to be true–and to be fair, I turned this into a dried bean recipe because I vastly prefer the flavor–but I have found it to be a treasure trove of ideas for the slow cooker, many internationally inspired. In this specific recipe, I thought the flavor from the Dijon mustard with coriander and cloves was especially genius. It is definitely not the prettiest dish, but mushrooms plus white beans pretty much equals grey, unfortunately. But such a yummy grey! I have no idea what a French housewife would think of my parsley and mushrooms, but I make no claim that this is a traditional cassoulet. 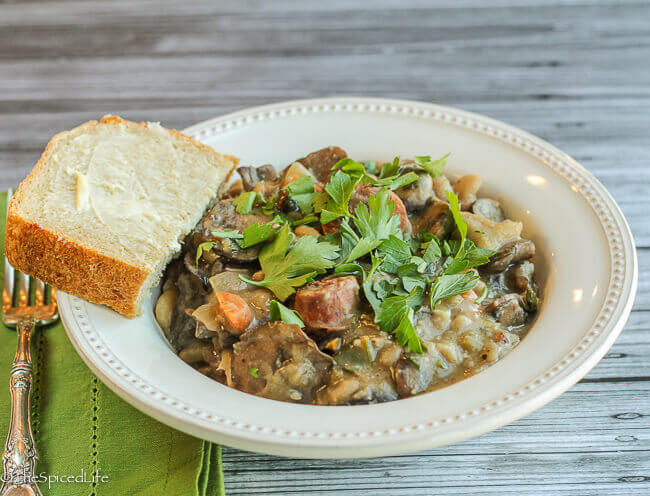 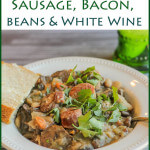 Print
Weeknight Cassoulet with Sausage and Bacon
Adapted from Kim Laidlaw. I highly recommend good bread to serve with this.
Course: Entree
Cuisine: French
Author: TheSpicedLife
Ingredients
For the beans:
For the cassoulet:
Instructions 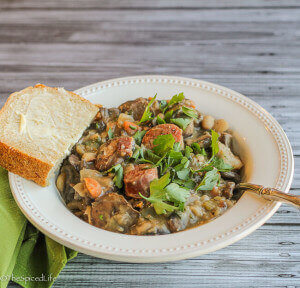